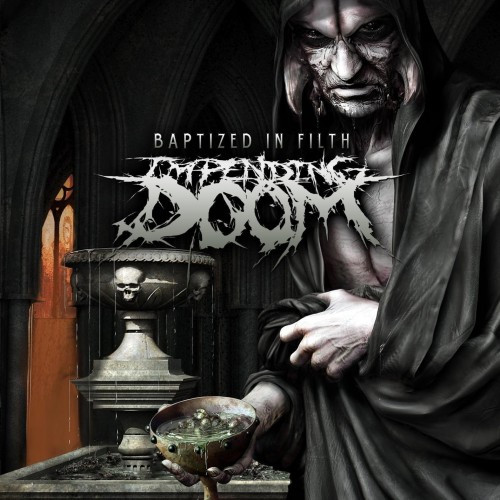 (DemiGodRaven (ex-The Number of the Blog) delivers this review of the new album by California’s Impending Doom, which is out now on eOne Music.)

As a band and a music fan, Impending Doom and I have a bit of a stormy history (not that we’ve actually fought, they seem like nice people). I’ve been one of many who have spoken out against the group’s too-on-the-nose gimmick of using ‘goreship’ to describe their brand of Christian deathcore. While I’m sure the band have said it somewhat cheekily in response to being pigeonholed, it has stuck with them.

I also reviewed their last disc, There Will Be Violence, back when TNOTB was alive and found the whole experience to be underwhelming. I felt that the mix on the album was a little flat, and a lot of the songs fell on the bland side. There were a few standouts, including the song “Orphans”, but three or four good songs do not a good CD make. Had those songs taken the form of a There Will Be Violence EP, I may have reacted better, but as an album the whole thing became a slog I never really felt any desire to go back to.

However, I do believe in a clean slate of sorts, and so with that in mind I decided to check out Baptized In Filth, if only because I was already buried in religious metalcore listening to Demon Hunter’s latest (more on that later). 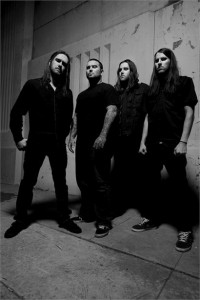 Baptized In Filth does some things to rectify what I found wrong with the group’s previous CD. Whereas the last one felt like a slog, this one seems to know its limits and keeps things rather short and to the point. I never felt any real desire to skip anything, and the album was over almost before I could take notice. The songs are also heavier on the low end this time around, making the whole album sound fuller.

One issue continues to plague this band, however, and that is a tendency for the songs to fall on the bland side. The music on this album hits hard, but it still contains a lot that you’ve heard before. Once again, we find ourselves with a handful of good songs and a couple of whiffs. At the very least, I can conclude that Baptized In Filth is Impending Doom’s most inoffensive album so far.

Here is the thing about Impending Doom: They know what they are and they know what they want to do. It seems as if every song is written with that in mind — the music sticks tightly to the Impending Doom way of doing things, including a strict adherence to the band’s religious theme the whole way through (which does present some pretty odd lyrical silliness). The problem is that the Impending Doom way of doing things is the way a lot of bands do things, so that everything they’ve written is passable and solid, but barring the occasional experimentation, you find nothing that really sticks.

I’m a huge fan of referring to albums like this as junk food; I’ve noticed that other people use phrases like “fluff” as well. It’s easily digestible for fans of the genre, and hey, if you’re looking for the last sick-ass breakdown brah, then Impending Doom have that motherfucker in spades. There aren’t many bass blasts to cue you that they’re about to drop, but you still have to be practically drowning in your own drool if you don’t feel them coming from a mile away.

Vocally, Baptized In Filth is a bit more interesting than There Will Be Violence. I approve of the greater focus on high screams this time around. It does help them differentiate themselves somwhat more than usual.

At  times with Impending Doom’s music, you have to glance at the lyrics to find out what you’re listening to if you land there on shuffle. But if you really want the prototypical track that represents Baptized, you should check out the song “Murderer”, because man, does that song sum up what you are headed into. Lyrically, it is on the nose as an example of a band who really earn that Christian tag next to their name. They cover some heavy elements of theology in the song, and even inject some breakdowns to accompany the references to Death, Ascension, Resurrection. You even get breakdowns about the Number of the Beast at one point. It will be interesting to see a whole crowd bro-chant “six-six-six the number you’ve chosen” as if it were some sort of anthem.

As for the rest of the instrumentation, though it may somewhat suck to say this, it’s solid, but it builds an all too familiar sound. I’ll leave it at that, rather than spend whole paragraphs saying, “You’ve heard much of this before”.

One song breaks up the album, and that is the ballad “My Light Unseen”. It proves the curious fact that when Impending Doom want to, they can kick out a pretty solid ballad. Funny thing, though: They chose to bring in Ryan Clark of Demon Hunter fame, which makes the song sound like a Demon Hunter ballad. But goddamnit, it’s one of the best Demon Hunter ballads out there, topping what appears on the latest Demon Hunter disc, True Defiance. I can pretty much predict that there will be an Impending Doom/Demon Hunter bill at some point this year, just so they can do this song live. It actually sounds very out of place on the slate of passable metalcore with which the band spends most of Baptized In Filth assaulting you.

Baptized In Filth is a marginal improvement upon There Will Be Violence. Even a marginal step forward can make a noticeable difference for a band like this, who usually stick to their old stylistic reliables. As mentioned, I do think that the album hits harder than the previous one, but that is thanks mostly to a heavier presence on the low end rather than any real change in the songwriting. I never felt the urge to skip anything, and the whole experience has blown by me multiple times. I’ve given “My Light Unseen” a couple more spins on its own, because it’s a solid slow song.

Impending Doom fans will enjoy this. For us elitist metalheads, it’s an okay experience — no reason to flip your shit and rush to the radio to skip the songs, but likewise, no burning need to rush to the music player and put it on either.