(Yesterday, Sweden’s In Mourning began a limited-time streaming of their new album. Today, TheMadIsraeli has a review.)

Fuck me for forgetting about this.

It seems even when sick, there is to be no rest for me.  I completely forgot that the new opus of melodic death doom metal masters In Mourning, The Weight Of Oceans, was to be out soon.  As you can imagine, when they started streaming this album yesterday I immediately had to get on that shit.  It’s a vital part of the new movement of melodic death metal that mixes powerful melodies, pedal-point riffing, and drama with doom metal’s macabre melancholy and profound slower tempos.

In Mourning made quite a splash with their debut, Shrouded Divine, an album I love to this day.  Their second release, Monolith, was a good album, but they tried to go for a more energetic approach that, both in tempo and in melody, had fewer connections to doom.  Something about it just didn’t sit right with me; it just didn’t feel like In Mourning to me.  Thankfully, The Weight Of Oceans is a return to In Mourning’s doom-intertwined roots.

In Mourning, for the uninitiated, incorporates the typical influences of this new style of melodic death metal at their core, essentially combining the slow tempos and proggy song structuring of old school Opeth with Insomnium’s poignant, to-the-point melancholic melodies and sense of melodrama and dignity.  The band are also obviously influenced by the spearheads of this new style of melodeath, Daylight Dies.

In Mourning definitely have their own sound though.  Their attack is precise and intricate, and their sense of melody focuses less on complex transitions and more on straight-forward, mournful melodic progressions.  The complexity of the composition is more in the realm of how the guitars play with one another, creating some quite dazzling walls of melody.  Björn Pettersson and Tim Nedergård are one of my favorite current guitar duos in metal right now.  Their sense of compositional teamwork is absolutely astounding, acting as one in generating an intricately woven overcast of despair and agony that just consumes the listener. 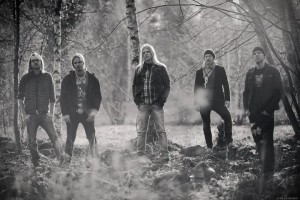 Opener “Colossus” begins with a droning synth and a punctuated-yet-reserved drum groove.  Thumping bass soon bleeds into the mix, followed by a guitar line that ushers in a suitably sober melody.  After leading you in with that hypnotic introduction, In Mourning open the flood gates and crash ahead with a simple, but extremely powerful central riff, and a high-end melodic overhang provides the song an extremely poignant central groove and a cascade of melodic rain.

In songs like this one, In Mourning’s doom influences kick in, providing emphasis by repetition and using sections of music that are so well composed you can’t help but fall into a trance-like state.  The song is over 9 minutes in length, but it is essentially only three sections (with a few, very brief intermittent bits to spice things up): Its verse; its powerful, explosive, massive chorus; and a mournful solo.  The song is both an exercise in textural complexity (a definite specialty of In Mourning) and yet also a display of the effectiveness of utter simplicity at the same time.

“A Vow To Conquer The Ocean” switches things up a bit.  It is a faster song, containing a powerful and pompous charging-into-battle flair that invokes the aura of progressive black metal created by bands such as Enslaved.  Its opening riff is a screeching melodic furnace of majestic aggression.  It has a distinctively thrashy tone, and overall carries itself with an extremely powerful, stalwart, and regal bearing.  Slower, waltz-cadence sections are used to spice things up and keep the song interesting yet moving.  The song also makes effective use of clean interludes, so that when the heaviness returns, it’s like being hit in the chest with a small boulder.

“From A Tidal Sleep” is also blackened in flavor, a waltz that eviscerates as much as it weeps.  It builds itself up with thick, rich, melodic chords complemented by thrashy riffs in between.  It explodes at its finale with a fury of blast beats and dual guitar tremolo-picked attacks.

“Celestial Tear” is an extremely memorable and quite captivating ballad.  6/7 of it are entirely clean guitars and clean vocals, filled with profound, macabre melodies that haunt your ears.  The song builds superbly to a heavy finale in its last minute that brings in the deathly roars of vocalist and THIRD guitarist Tobias Netzell (I don’t think he contributes significantly to the guitar composition, but he adds extra layers to the live shows).  It closes on an effective, weighty reprise of the song’s central theme with a dose of agonized brutality. 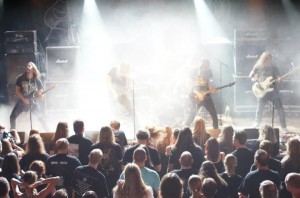 “Convergence” is a powerful, engaging, 8+ minute epic that spans all the elements introduced thus far.  It consists of an energetic, thrashy first third, full of powerful riffing; a doomy, contemplative mid-section packed with layered instrumentation and somber melodies; and an effective return to the song’s majestic intro, followed by an awe-inspiring outro that lasts for a good 2+ minutes.  The band also employ some very tasteful Hammond organ work, which provides interesting color to the music.

“Sirens” is a mournful piano-only interlude, and these always fucking win me over.  You know the type of tune I speak of.  Always welcome in my book.

Despite its black-metal caliber, blast-beat brimming intro, “Isle Of Solace” is a potent groove-thrash number, full of smart and intricate start-stop riffing.  One of the darker, more atonal pieces on the album, it stands out and is weighted with gravitas.  I really like the chorus of this song, with its unusual melodic progression and the intricate pedal-point riffing complementing the octaves, and how all the elements within it come together.

“The Drowning Sun” sees In Mourning playing a more death-metal oriented tune than anything else on the album.  Not much melody is found here — mostly atonal dissonant riffs, except for its grandiose, melodrama-filled, neoclassical-tinged chorus.

The closer, “Voyage Of A Wavering Mind”, is the doomiest song on the album, a plodder filled with Middle Eastern melodic flourishes and pronounced sludgy riffing.  It’s also oddly sparse on the vocal front, rendering almost 70% of the song purely instrumental.  It is an astoundingly powerful number, drawing listeners into a trance and ushering them out of the album with strength and a sense of solitude.

The Weight Of Oceans also sounds fucking terrific.  The mix is clear, tight, and intricate, with an emphasis on instrumental clarity.  The guitars don’t have a lot of gain on them, the band instead preferring a pronounced low-key chunk that brings forth a nice crisp attack.  The complex chords and melodic layers that In Mourning use are really highlighted by the low-key guitar tone.  The drums are tribal and have a lot of thoom to them in the best way possible, crashing with great ferocity, thanks to the pointed attack of drummer Christian Netzell.  The bass of Pierre Stam rumbles true, providing a solid undercurrent for the guitars’ crisp, higher end color. 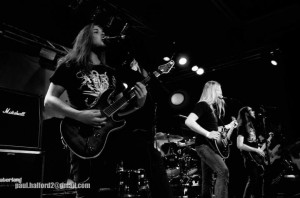 The Weight Of Oceans is a powerful record from end to end, definitely one of this year’s favorites for me.  2012 is becoming quite a year for this brand of melodic death metal, first with Elysian, now with In Mourning, soon to be followed by 7 Horns 7 Eyes, and finally with my biggest expectation — Daylight Dies, whose new album A Frail Becoming we will probably see in the Fall.  Can’t say I mind this trend.

EDITOR’S NOTE: If you haven’t yet heard the full stream of The Weight of Oceans, get on that via this link. The music will be streaming only until April 18, which is the European release date for the album on the band’s new label, Spinefarm Records. If Spinefarm follows its usual policy, there will be a significant lag before the album has an official North American release, but it can be ordered now at this location. You can follow In Mourning by visiting their Facebook page.

5 Responses to “IN MOURNING: “THE WEIGHT OF OCEANS””