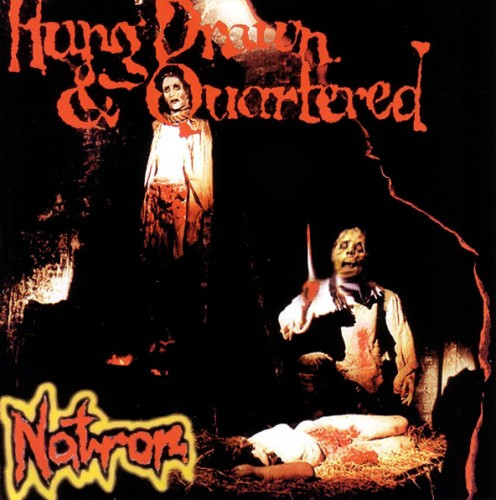 (TheMadIsraeli is treating his sick self with sick music. And why the fuck not?)

For some reason, whenever I’m sick I’m compelled to listen to the messiest, filthiest, nastiest, most obscure death metal I can find.  Maybe I feel like I need music that fits my physical state, in order to exist in equilibrium with the universe, but either way, it’s just a compulsion I have.

I had no idea who the fuck Natron were nor why I had never heard of them before.  It turns out that they are tech-death veterans of Italy (and I do mean vets — we’re talking a consistent lineup since ’94) who’s latest album is this year’s Grindermeister.  I’m not here to talk about that one, though, although this review is very much related to it.

Instead, this is about Natron’s 1996 full-length debut, Hung Drawn And Quartered.  Why is this relevant to their new album Grindermeister?  Well, 8/10 of that album was used to re-record songs from Hung Drawn And Quartered.  And by that I mean that all of the songs except one on the new release are re-recordings of the debut.  The reason for doing this?  I’m sure it’s because Hung Drawn And Quartered suffers from some absolutely ghetto-ass, dank-dungeon-recorded-in-a-rehearsal-room-with-a-mic-in-the-center-of-the-room style elbow grease.  I’m not gonna lie, that album sounds like utter shit.  BUT THE MUSIC IS SO FUCKING GOOD I COULD CARE LESS. 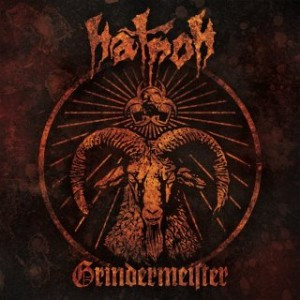 Natron claim to be aiming to play a style of music that “combines the best of thrash metal, death metal and grindcore”, and I guess that’s what they do here?  I just know this is right up my alley.  This is essentially a mix of old Dying Fetus and old Suffocation.  You couldn’t make a combination of brutality more magnetizing to me than that.  The riffs are very technical and intricate, but most of all they have a VERY alien tonality that really gets me enthralled.  Combine this with the obscure-as-fuck guitar tone, which sounds like a combination of shattered glass and oozing puss, the appropriately ghetto-ass trash-can drums, a thumping bass that keeps a good low end, and appropriately brutal and nefarious low end grunts and roars, and you have yourself a mighty proficient underground death metal gem.

I’m just going to allow you to hear this shit for yourself.  As an added bonus, I will include what Grindermeister” re-recordings I have found.  I am doing this to demonstrate a point: that not only is Natron more brutal and far more adept on the composition front than a great many bands in the modern death metal landscape, but also their songs — WRITTEN IN FUCKING 1996 — somehow sound completely current and fresh.  I intend to follow this band with great anticipation; their whole discography is a real trip.

P.S.: Sadly, I was able to find both the old and new versions of only one song, “The Stake Crawlers”, but that will do the job.