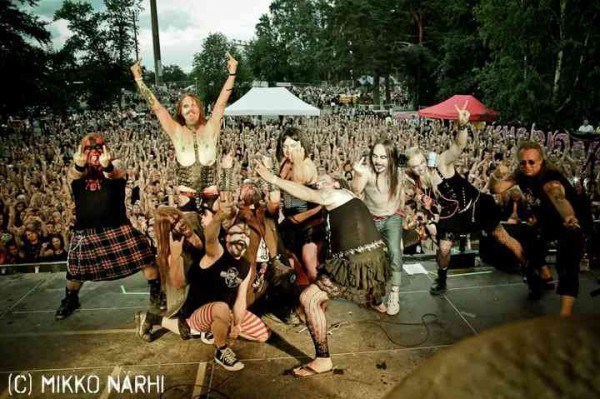 For reasons I explained yesterday, I haven’t been my usual upbeat self lately, and I’m still pretty down. NCS readers have been really understanding and sympathetic. Some of you have even sent me e-mails with links to videos and music, in hopes that they would prove to be distractions from my grief  . . . and they have been.

I’ve collected some of them in this post, in case  you might need some distractions, too. I’ve arranged them in order of increasing weirdness and depravity, with the finale being a NSFW video by a band of Finnish deviants named Turmion Kätilöt (pictured above). Nothing takes your mind off grief like depravity.

This item, and the next two, came my way from Ben C. (Church of the Riff). I liked his introductions so much I’m just going to steal them. Here’s his preface to Item One: “Meet Buck. He’s a deer, who’s dating a hunter’s daughter. It sounds tame, but this is seriously some Pixar quality shit.” And so it is.

You can probably guess where this one is headed, just from Ben’s description. The high points for me were the near-kiss in the tunnel, the hunter’s stoic bloodhound, and the final few seconds. There’s a metaphor in here. I think it’s a message about tolerance for interspecies love. What do you think?

Yeah, so this perked me up, because it includes all the movie food groups for me. It has action, it’s a sci-fi story, and it co-stars Bruce Fucking Willis (along with co-lead Joseph Gordon-Levitt). Also, it involves time travel, which can be good for fucking up your brain, which is good. This explains why Bruce Fucking Willis and Joseph Gordon-Levitt play the same person.

Want to see this.

Here’s Ben’s intro for the second item: “Follow The Sun. So like it started out kinda fun and innocent, like when you first dropped acid and the walls seemed like smiling giants. Then about half-way through you started screaming because you realized the giants eyes were bleeding bats made of dismembered limbs.”

I think that captures the feeling pretty fucking well. This video starts really retro, like something you’d see at a drive-in theater in the 50’s if you had been alive in the 50’s, but it gets dark and fucked-up before the end. 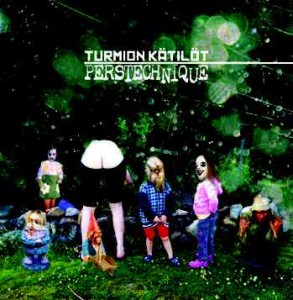 This final item arrived via Finnish reader and commenter jeimssi, with this introduction: “I’m not trying to convince you to listen to this band, BUT check out this music video. Certainly something you won’t bump into in MTV. Prepare yourself!” Honestly, I don’t think I could have adequately prepared myself for this, even with the warning.

The video is for a song called “Ihmisixsixsix” by Finnish industrial/death metal band Turmion Kätilöt (which seems to mean “Midwives of Ruin” in English). I first saw this band’s name when they came in No. 6 in the voting for Metal Band of the Year at the 2011 Finnish Metal Awards (which I wrote about here).

The song “Ihmisixsixsix” was released as a single in 2010 and later included in the band’s 2011 album, Perstechnique (which came in No. 6 in the voting for Album of the Year at the 2011 Finnish Metal Awards). I got hooked on the song pretty fast because it has a catchy industrial groove running down the middle of it, and it’s also drenched in death metal filth.

There was an earlier version of this video that was banned by YouTube, apparently because it showed topless women. Well, Turmion Kätilöt fixed that problem. There’s not a single topless woman in this second video for the song. Nope. Not one. Just dicks and male assholes and pissing and lots of singing and writhing in a shower stall. I don’t think this one made it onto YouTube either.

The lyrics are in Finnish. The Google Translate version of them is the usual gibberish, but not that funny (other than the phrase “ass tears”), so I’m not including them.

This was distracting, that’s for sure.

HA!  I fooled you! That last video really wasn’t the finale after all. This next one is the last, because it’s the most weird and depraved of all. It’s another offering from Ben C., with this lead-in from his e-mail: “Pizza Hut UK is offering a 14″ stuffed crust pizza. The crust is stuffed with….A MOTHERFUCKING HOTDOG.”

True story. The news report, which is here, says Pizza Hut has no plans to make the hotdog-stuffed pizza available in the U.S. I don’t know whether this says something about the UK or about the US. What I do know is that the photo of this thing looks obscene, even though it probably tastes fantastic. But that’s true of so many things, isn’t it? 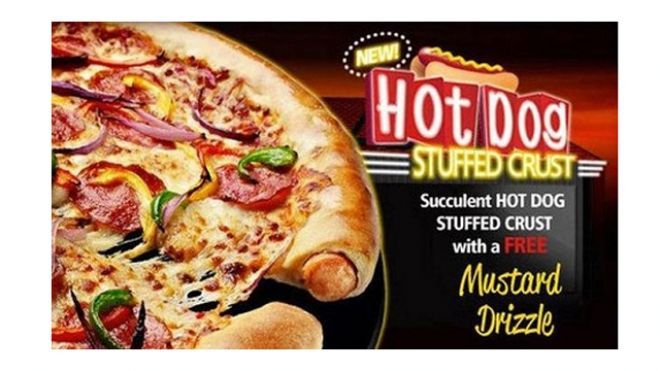