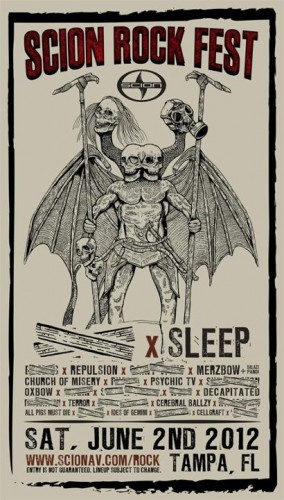 There are some places in these continental United States that are farther away from Seattle than Tampa, Florida, but Tampa is pretty fucking far out there. And on June 2, it’s going to be really far out, because that’s the day when Scion is sponsoring this year’s edition of the Scion Rock Fest.

Scion A/V has been doing a lot of very cool things with metal, and I continue to hope they get a few car sales out of it because I believe in people making a buck when they make underground music or help support it. Yesterday, I saw two things that reminded me of the good that Scion is doing for our kinda music. One was a new Scion-funded music video by Black Breath, which we’ll come back to after the jump, and the other was this “rock” fest in Tampa.

Scion has announced that the festival will include 26 bands playing at four different Tampa venues throughout the day. They’ve also released that poster you see up above. Obviously, there aren’t 26 names on there . . . yet. But the ones that are on there make for an excellent line-up: Sleep (holy shit!), Repulsion, Merzbow, Church of Misery, Psychic TV, Oxbow, Decapitated (!!), Terror, Cerebral Ballzy (?), All Pigs Must Die (!!), Idea of Gemini, and Cellgraft.

The other names have been “masked”, but I can see a few letters here and there. The name in the second line on the far right looks a helluva lot like Suffocation. And on the top row, I can almost make out Saint Vitus. Can you make out any other names? I’ll put a bigger image after the jump.

Scion hasn’t yet officially announced the Tampa venues, but they have given addresses — and so it’s easy enough to figure this out. Here they are:

It appears that the shows at all four venues begin at the same time — 4:00 p.m. — so it won’t be possible to catch all the acts. On the other hand, the venues all seem to be close to each other.

Actually, I don’t know why I’m getting so excited about this, since there’s no way I can make this unless I can get a new teleporter battery (and, to be brutally honest, I need a teleporter, too), and I suspect we don’t have a big percentage of readers who can either. I guess I just like the idea of U.S. metal festivals in general, since they make us seem less backward in comparison to the Europe-ians, and this one has the added bonus of a tremendously varied line-up — plus, it’s sponsored by a goddamned car company. Also, they’re keeping secrets, which of course makes me even more curious.

Here’s a bigger image of the poster. Any more guesses about the line-up? 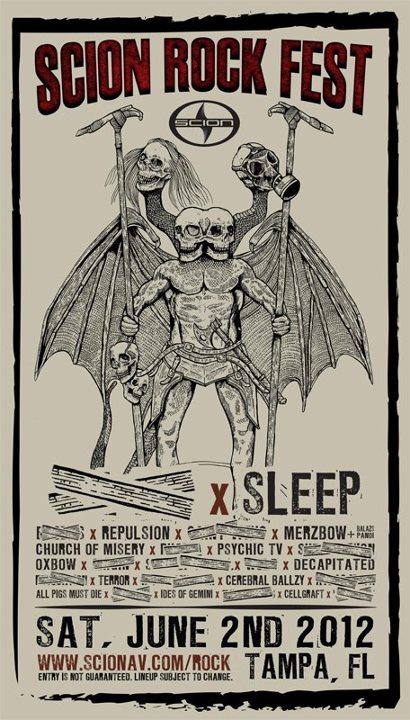 UPDATE: Well, the secrets are no longer secrets. Here’s the unmasked version of the poster: 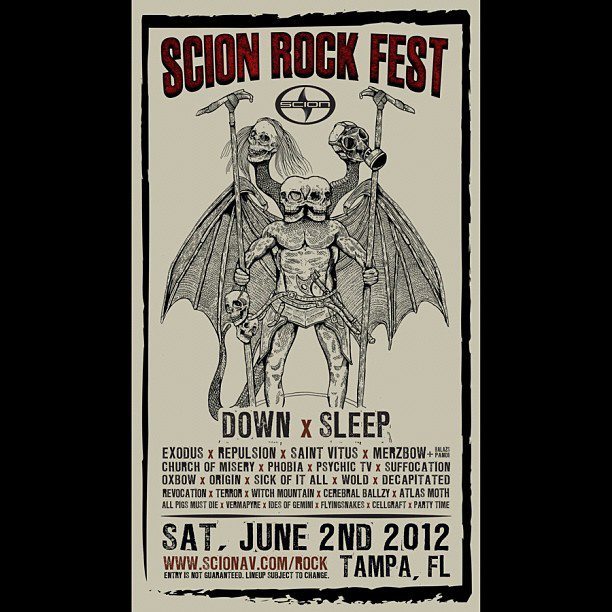 Now, here’s the second thing I saw yesterday that made me want to shake Scion by the hand: They produced a video for Seattle’s own Black Breath. BadWolf reviewed this band’s 2012 Southern Lord release, Sentenced to Life, for NCS last month, and you can read that here. In a nutshell (to borrow BadWolf’s words), “This record is the sensation of being thrown into a mosh pit distilled into 30 minutes of D-beats, gang-shouts and buzzsaw guitars.”

The video is for a track called “Home of the Grave”. It’s one of the songs on the album that BadWolf characterized as merging “Slaughter of the Soul-era At The Gates riffs with Discharge attitude and a nearly pop-punk knack for scream-along choruses.” Someone figured out that this song needs to be played in a grave, and that it fucking wakes the dead. Watch:

16 Responses to “SCION ROCK FEST 2012: CAN SOMEONE LOAN A BROTHER A TELEPORTER BATTERY? (THERE’S ALSO A BLACK BREATH VIDEO IN HERE)”