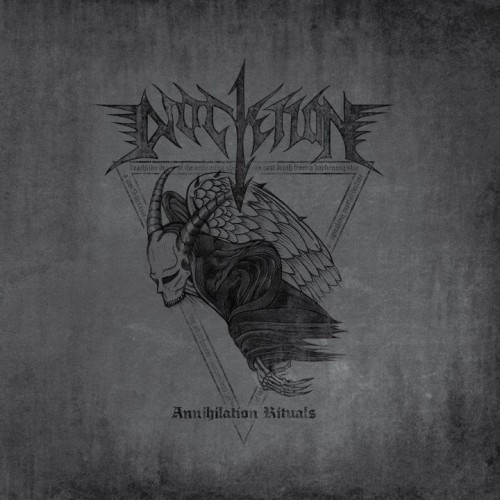 The reason why it’s so easy for human beings to imagine the horrors of a supernatural place called Hell is because we do such a bang-up job of creating it right here on Earth. When it comes to destroying minds and brutalizing bodies, our own species’ sordid history provides a textbook of how to do it up right. At least when metal bands paint pictures of Hell with their music, no people or animals are harmed in the process. Usually. Unless you count self-abuse.

Two of the bands I’ve gotten into lately do an especially effective job of creating musical Hell, and yesterday both of them released videos of themselves recording new releases. I looked closely, and I didn’t see any humans or animals being maimed or killed in the studios. But the music is sure as fuck killing me. I want these records yesterday.

Thanks to comments from NCS readers, I’ve been developing a lust for war metal. New Zealand’s Diocletian is one of the bands whose music I’ve been getting into (see our March 2012 feature about them here). Earlier this month, they dropped a Facebook post about their plans to release a compilation album to be titled Annihilation Rituals, which will include their first four rituals: an untitled 2005 demo, the Decimator EP (2007), their part of the Chaos Rising split (2008), and the Sect of Swords EP (2008). That should be worth grabbing. The release date hasn’t been announced.

We previously reported that Diocletian has also recorded music for a 7″ vinyl (European Anniilation) that will be distributed on their European tour this May. One of the two new tracks for that 7″ (“Antichrist Hammerfist”) is up on SoundCloud, and yesterday the band released a video of themselves recording the other one — “Deathstrike Overkill”.

I assume the sound on the video isn’t a final mix — both the video focus and the sound focus are on drummer Cam Sinclair. But that’s okay, because he’s a beast. The song is a beast, too. I hope the music on this 7″ will eventually become available to those of us who can’t make one of the shows on their tour. 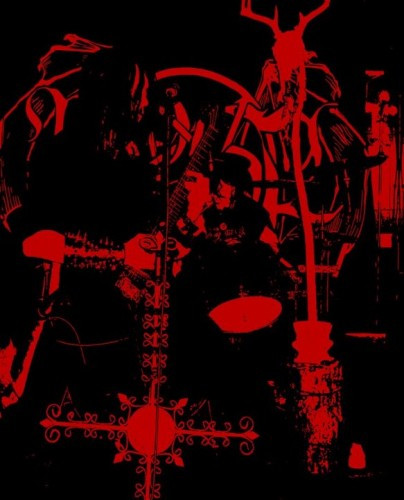 Ptahil are from Fort Wayne, Indiana. Undoubtedly, they are the most dangerous thing in the region. I reviewed their 2011 album, For His Satanic Majesty’s Glory, this past January. I worked hard trying to capture the sound in that review, so I’ll be cut with razors before I do it all over again:

“Try this on for size: echoing vocals dipped in lye and then scalded in the smoking blood of a battlefield; fuzzed-out sludgy riffs and rough solo’s that hit you down in your gut and make you want to hit back; punk and rock and doom rhythms that are as catchy as a new strain of STD; ingenious production that’s somehow both sharp-edged and full of DIY distortion; and lyrics that conjure satanic rituals full of bile and venom.”

Ptahil create Hell on earth, too, but not like Diocletian. This is a kind of black metal that I described as hot instead of cold. Instead of embracing Satan as the architect of suffering, Ptahil take the satanic realms as a symbol for freedom. Though I’m not 100% sure that their satanic rituals are merely symbolic.

Anyway, yesterday Ptahil announced the completion of their new 7-track album, The Almighty Propagator Of Doom And Despair, which they say will be released on December 21, 2012, through Wraith Productions on vinyl and in CD format, and through Stronghold Records on cassette. But more than the announcement, Ptahil also released a video for the new album’s opening track “Satanicus Sabbathicus”. It includes film of the band both recording the song and playing it live.

Again, I’m assuming this isn’t the final mix of the song and that it’s pre-mastering, but it’s still a hell of a song.

P.S. I can’t remember when I first saw the following quote, but I’m amazed that after almost 2 1/2 years of perpetrating this blog, this is the first day when I ripped it off:

“What fresh hell is this?”

“If you want to know what God thinks of money, just look at the people he gave it to.”

“This is not a novel to be tossed aside lightly. It should be thrown with great force.”

“Tell him I was too fucking busy– or vice versa.”

“This wasn’t just plain terrible, this was fancy terrible. This was terrible with raisins in it.”

“I had been fed, in my youth, a lot of old wives’ tales about the way men would instantly forsake a beautiful woman to flock around a brilliant one. It is but fair to say that, after getting out in the world, I had never seen this happen.”

“So, you’re the man who can’t spell ‘fuck.'” (Dorothy Parker to Norman Mailer after publishers had convinced Mailer to replace the word with a euphemism, ‘fug,’ in his 1948 book, The Naked and the Dead.)

“The best way to keep children at home is to make the home atmosphere pleasant, and let the air out of the tires.”

“I like to have a martini,
Two at the very most.
After three I’m under the table,
After four I’m under my host.”

For her epitaph, she suggested “Excuse my dust.”

(Thanks to TYWKIWDBI for the quote collection.)

5 Responses to “FRESH HELL ON EARTH: DIOCLETIAN AND PTAHIL”