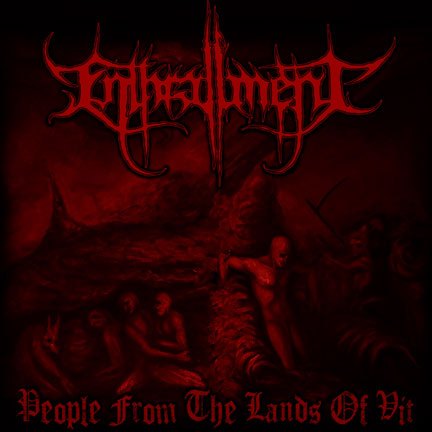 It’s a Sunday morning here in the Pacific Northwest. The air is crisp and slightly chilled, the sun is shining, and a high cloud layer has turned the sky a pale blue-gray. It’s a beautiful time to be outside. So I thought, what better way to celebrate than to stay inside and beat the shit out of my head with some brutal heavy music? Well, it made sense to me.

I recently discovered this Bulgarian death metal band via their new official video for a song called “Fruits of Pain and Blue Sky”.  You see?  There’s a blue sky connection. This song appears on the band’s third album and their first for the United Gutteral label, People From the Lands of Vit, which is out now.

Listening to the song was liked being dropped into a boiling stew of Cannibal Corpse, Obituary, Suffocation, and Deicide: brutal, technically oriented riffing; riveting drumwork with timely-placed blasting; a slew of piercing guitar solo’s; and gruesome vocals. It triggers a nice adrenaline rush and it’s catchy as well as merciless.

The video is nothing but the band performing the song, but it’s well made, and the Enthrallment dudes look like they’re not fucking around. Get beaten and bruised right after the jump.

If you liked that, here’s more. As you can see, the whole album is up on Bandcamp, where it can be purchased as a download or a CD via this link. Enthrallment is on Facebook at this location.

Die-hard Gojira fans (including me) know about the series of beautifully filmed videos of the band’s performance at the Vieilles Charrues Festival in Carhaix, France, on July 17, 2010. I hadn’t watched any of these videos in a while, but was reminded of them by a message from NCS writer TheMadIsraeli about one of them. He has been a hard sell on the merits of Gojira, but he pronounced the video for “Toxic Garbage Island” “cool”, which I think qualifies as progress.

And yeah, the video is damned cool. I’m going to include it in this post, but first I want to play another one from that show, just because it’s so goddamned heavy. Gojira don’t fuck around either. I might go outside now.

“The Art of Dying”

8 Responses to “NO FUCKING AROUND: ENTHRALLMENT AND GOJIRA”