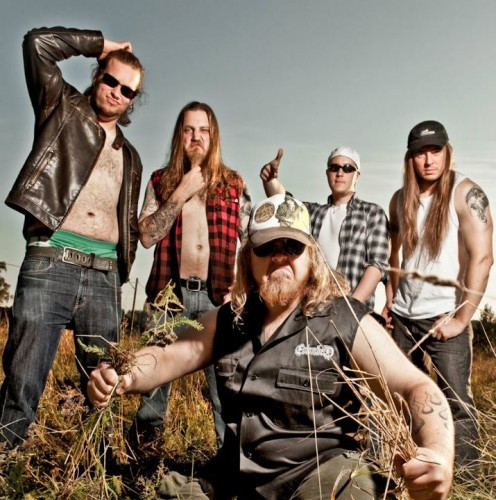 I have at least one of these moments every day, and usually more than one: when I feel like a moron.  I just had my first one for today.  I watched the first official video from Finland’s Ghoul Patrol and realized how stupid I was for not listening to their debut album, Ghoul Patrol, when it came out last fall (on the Spinefarm label).  Because this song is a goddamned headbanger’s delight.

Seriously, if you can keep still while hearing this song, then your bondage gear is on too tight. It’s some mighty fine death ‘n’ roll that ought to give you an acute case of sore neck syndrome in no time at all.

And the video is hilarious, from the first “moooooooo” to the last one.

I’ve been waxing nostalgic about my youth in Texas recently, but one thing I never got into was country western dancing. That kind of music wasn’t the kind of country I liked, and the kind of bars and dancehalls where people did that kind of thing were full of  . . . not really my kind of people. Now, if they’d been line dancing to music like Ghoul Patrol’s, I’d have had a whole different feeling about it.

Truly an inspired video.  And to think that it took a metal band from Finland (or at least a Finnish video production company) to come up with the idea.  Watch it after the jump, especially if you know what line dancing is.

11 Responses to “GHOUL PATROL’S “SIX FEET UNDER” VIDEO: WHO KNEW YOU COULD LINE DANCE TO DEATH ‘N’ ROLL?”