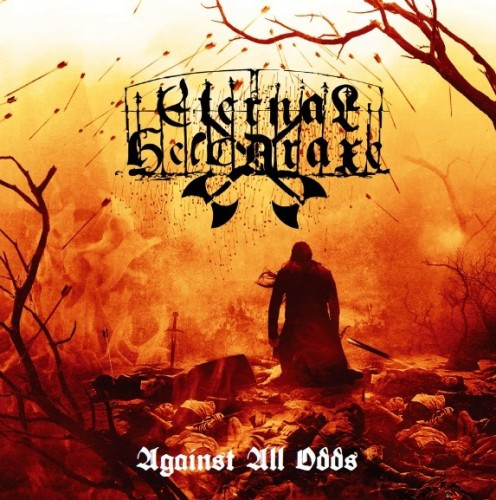 Irish pagan/black metal band Eternal Helcaraxe walk a fine line between the dramatic and the melodramatic on their new album Against All Odds, but for the most part stay on the right side of it. Drawing on Irish mythos and a national identity marked equally by tragedy and a spirit of indomitable resilience, Eternal Helcaraxe have crafted anthems that both tug at the heart strings and rake at the flesh with sharpened swords.

This is not our first exposure to the band. In early 2011, I reviewed their EP, To Whatever End (2010). The distinctive characteristics of the music on that very mature EP are still present on the new album. Even if you lacked access to the lyrics, even if you didn’t know that this is an Irish band, the music itself conveys the obviously heart-felt emotions and principles that inspire Eternal Helcaraxe.

Against All Odds conveys a sense of epic struggle, the will to fight to the death for lost causes, the rising up of subjugated people with weapons in hand — no backing down and no quarter given or taken, ready to fall or to triumph in the service of honor and freedom. Jaded cynics in the audience may start rolling their eyes simply by reading those words, but for those romantics out there, there’s not a single song on this album that will fail to get the blood pumping and the heart soaring. 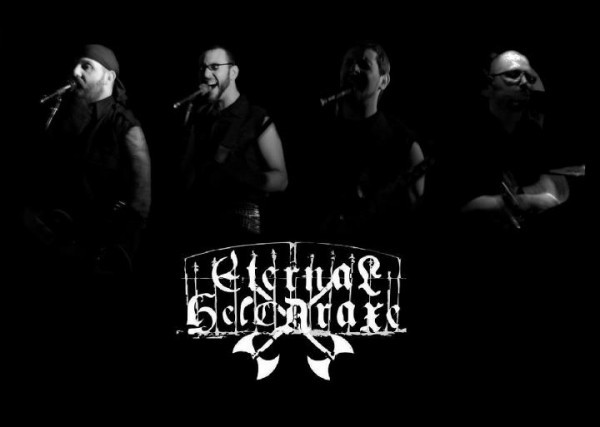 As in the case of the band’s first EP, Against All Odds is full of dynamic music. Though the songs are longer than average, they’re constructed in a way that provides contrast. Sweeping synthesizer orchestration leads to galloping riffs and howling vocals. Explosions of drum blasting and tremolo scything fall silent to make way for melancholy interludes of acoustic guitar. Beautiful clean guitar leads turn physically riveting infantry charges into triumphant anthems.

Even the arrangement of the songs on the album seems designed to enhance its dynamism. The introductory orchestral track “Claim Your Place With the Gods” is cinematic in its scope and feel, a panoramic melody that creates mental images of green hills and distant mist. The hard-charging “One Stands Still Here” and the powerful, dramatic “Invictus”, with its rising and falling tremolo-picked chromatic scale, build the drama and the intensity while introducing one emotional melody after another.

The music takes a darker turn with “We Assist Death” and the album’s shortest track, “The Shadow of the Wolf”. Both are attacking songs, with flesh-cutting vocals, ripping guitars, and waves of blast-beat percussion — yet they, too, are built around dark, evocative melodies. “The Shadow of the Wolf” also proves to be a real headbanger.

“As the Snow Gathers” and “Echoes Through Our Blood” return closer to the style of the album’s early songs and include a layering of clean and harsh vocal harmony and a mixing of rhythms and moods, both jagged and beautiful.

For the grand finale, “Against All Odds (All the Battles To Come – Part II)” provides an 11-minute re-working of the long closing track from the band’s EP (“All the Battles To Come”). The band again resort to a synthesized overture, with the sounds of piano and strings setting one mood, only to have the mood change as the blasting and shrieking begin. The song includes yet another soaring melody, a quiet acoustic guitar interlude at the midpoint, and a martial snare pattern that provides a bridge as the music begins to swell and build toward the majestic ending. At the end, it’s not difficult to imagine warriors galloping across a broken plain, weapons held high, charging toward glory or death.

Where the band come closest to that line between the dramatic and the melodramatic is in the use of the orchestral synthesizer music. It’s effective in most places, but sometimes threatens to become too much (especially in the extended outro to “As the Snow Gathers”), disrupting that fine balance between the vicious and the heroically anthemic moods that Eternal Helcaraxe have proven to be so skillful in creating.

But for me, this is really a minor quibble. I’m a romantic at heart, and I’ve found that this album-length ode to battles of the past and battles to come, to fighting against the odds for the goal of justice, is pretty irresistible. Here are a couple of tracks to give you a sense of the album:

“Shadow of the Wolf”

[audio:https://www.nocleansinging.com/wp-content/uploads/2012/05/05-Eternal-Helcaraxe-Shadow-Of-The-Wolf.mp3|titles=Eternal Helcaraxe – Shadow Of The Wolf]

Against All Odds is out now on Abyss Records and is also available for download from Amazon mp3 and iTunes. You can read the lyrics to the songs here. To find out more about the band, use these links:

2 Responses to “ETERNAL HELCARAXE: “AGAINST ALL ODDS””