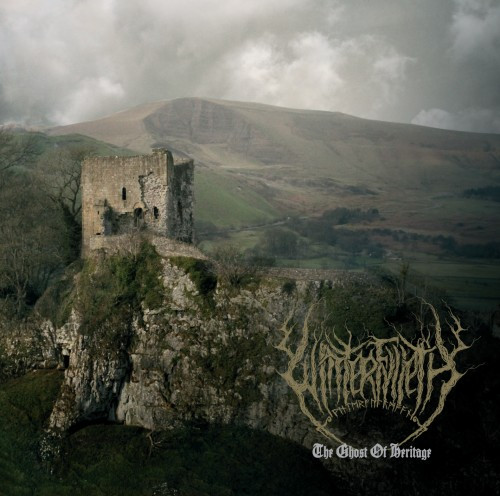 In September 2010 I went on a MISCELLANY expedition (posted here), and one of the bands I discovered was Winterfylleth, from Manchester in the UK. At the time, they were on the verge of releasing an album called The Mercian Sphere, and another web site had started streaming a track from the album — “A Valley Thick With Oaks”. Stunning song, and it led me to get the album and begin following the band.

Two days ago Candlelight Records re-issued Winterfylleth’s 2008 debut album, The Ghost of Heritage. The songs on the re-issue have been remastered by Colin Marston , the multi-instrumental member of Krallice, Dysrhythmia, and Gorguts. Candlelight also commissioned the new album artwork you see above.

When the band originally created The Ghost of Heritage, they recorded two songs that weren’t included on the album when Candlelight released it in 2008 — “The Ruin” and “The Honour Of Good Men On The Path To Eternal Glory”. Both of those songs as they were originally recorded in 2008 are now included as bonus tracks for the re-issue. The only reason I can imagine why these songs were left off the album originally is their length. The album was 49 minutes long without them, and those two songs would have added another 18+ minutes.

But that’s truly the only reason I can think of, because the songs are great. Admirers of The Mercian Sphere will recognize the titles of the two bonus tracks, because re-worked versions of both appeared on that album.

Winterfylleth began making their mark before that “Cascadian black metal” label began making the rounds, but today I would include them under its heading. In addition to being inspired by English heritage, the band fill their music with references to the ancient woods and fields of the English countryside. Their music is also tremendously atmospheric.

The two newly issued bonus tracks are good examples of the band’s stylistic approach. They’re mid-paced, almost to the point of being stately and dignified. The band use cascading waves of distorted tremolo chords and acoustic guitar interludes to weave slow, lush, somber melodies. The roiling sounds of double bass and blast beats and the smash and crash of cymbals add to the contrast between the viciousness of the instrumentation and the beauty of the melodies they create. That contrast is enhanced by the caustic shrieks of vocalist (and guitarist) Chris Naughton, with brief moments of clean vocal chanting.

Of course, Winterfylleth are not the only band with this kind of approach to black metal — using the standard musical techniques of the genre to paint dark sonic soundscapes filled with a sense of the sublime — but they’re doing it very well. Here are the original versions of the two songs — they’re not significantly different from the versions on The Mercian Sphere, nor are they reason alone to get this re-issue if you already have the original release, but if you’re unfamiliar with Winterfylleth, they make a nice introduction to the band’s music.

“The Honour Of Good Men On The Path To Eternal Glory”

[audio:https://www.nocleansinging.com/wp-content/uploads/2012/05/11.-The-Honour-Of-Good-Men-On-The-Path-To-Eternal-Glory-bonus.mp3|titles=Winterfyleth – The Honour Of Good Men On The Path To Eternal Glory (bonus)]

8 Responses to “WINTERFYLLETH: “THE GHOST OF HERITAGE” RE-ISSUE”