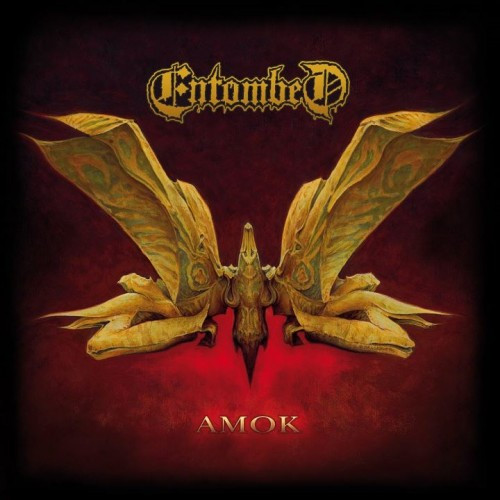 Almost five years have passed since Entombed released their last album, Serpent Saints – The Ten Amendments. Two days ago, the band finally released a new recording in Sweden, and it’s available for download as of today in the U.S. And what have the band given us after five years of creative hibernation? A re-recording of a song from Serpent Saints called “Amok”.

This “new” single is the result of a collaboration between Entombed and Ninetone Records, a Swedish rock/metal label that has released albums by Soreption, Corroded, and a bunch of other bands whose names I don’t recognize. I don’t know know whether Entombed and Ninetone have plans for something more than the “Amok” single — such as a new album or EP. I guess we’ll find out in due course. 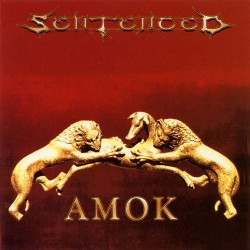 The artwork for the new single is sort of a re-issue as well. It’s a stylized painting of a moth called “Instar” that was created by the super-talented Dan Seagrave (and still seems to be available here as a limited edition print if you’ve got $95 you don’t know what else to do with). As used for the sleeve of this single, it bears a resemblance to the cover of a 1995 album — also called Amok — by the now-defunct but highly influential Finnish band Sentenced. (who were the lead subject of an NCS feature during our Finland Tribute Week series in late 2010). Based on a post by Entombed on their Facebook page, this appears to be coincidental — but man, what a coincidence.

As mentioned, the new single is a re-recording. I haven’t yet found any explanation of why Entombed picked “Amok”, among all the previous songs they could have chosen, for a new recording. it’s a puzzle, especially since the band’s membership hasn’t really changed significantly since they recorded “Amok” for Serpent Saints (bassist Victor Brandt has joined the ranks since then, with former bassist Nico Elgstrand moving to guitars).

Whatever the reason, it’s definitely a different take on the song. 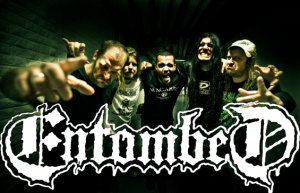 The band have shaved almost a minute and a half off the track’s length, compressing both the intro and the outro — and the intro now features the synthesized sound of plucked strings. The production also sounds more modern, more massive, heavier. The guitars have less of a raw, garage-band tone, though they’re still distorted. And there are synthesizers in the mix.

Overall, there’s a slight industrial-metal feel to the music this time, to go along with the Pantera-like strut and swagger and the few remaining elements of death ‘n’ roll.

The song’s strongest feature, besides a catchy-as-fuck riff, remains L.G. Petrov’s vocals. His nasty, throaty bellowing sounds awesome (even though the lyrics are as juvenile as ever), and this time there’s more multi-tracking and layering of the vocals.

I confess that I’m incapable of being truly objective about Entombed’s music. I’m just too damned influenced by the fact that this is the band (in a former incarnation, of course) that created Left Hand Path and Clandestine — seminal albums in the development and spread of the Swedish take on death metal that have stood the test of time. This is the band that made Wolverine Blues and launched “death ‘n’ roll”. And even though nothing they’ve done since then recaptures those glories (and recapturing them has never been on Entombed’s agenda, as far as I can tell), I remain a stupid fanboy when it comes to basically anything they do.

So, with that long-winded preamble and caveat, I will say that I really like this re-recording of “Amok”.

Below, you can hear both the re-recording and the original version of the song as it appeared on Serpent Saints. The single is available now on iTunes and Amazon mp3.