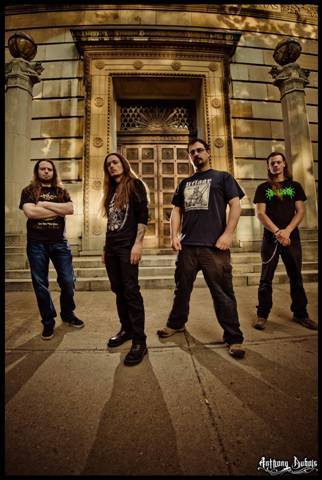 There are times when I catch myself about to say that Quebec is the current tech-death capital of the world, and then I’m reminded by things like the new song from Nile which premiered yesterday that such a claim would be an overstatement. But not by a lot. Quebec seems loaded up with excellent tech-death bands — including Cryptopsy, Gorguts, Neuraxis, and Beyond Creation — and Augury is certainly near the head of the pack.

Their first two albums, Concealed (2004) and Fragmentary Evidence (2009), were both true mind-benders of progressive technical metal, dazzling in their complexity and ever-changing styles, both imminently memorable and satisfyingly brutal.

I had the great pleasure of seeing the band perform twice in 2010 (and reviewed those performances here and here), once on The American Defloration Tour with The Black Dahlia Murder and again on the Panic Over North America Tour with Soilwork. Vocalist and co-lead guitarist Patrick Loisel was especially impressive, perhaps even more so because he’s older than your average death metal frontman and in his day job he teaches history and science.

At the time of those tours, Augury was playing without fretless bassist Dominic ‘Forest’ Lapointe and drummer Étienne Gallo, both of whom were members of Augury when the band recorded Concealed and Fragmentary Evidence. Lapointe had left in February 2010 to focus on another band, Montreal’s Beyond Creation, whose amazing 2011 debut, The Aura, we reviewed here. If you want to have your mind blown by some six-string fretless bass shred, check out this video we featured at NCS of him doing a playthrough of Beyond Creation’s “Omnipresent Perception”.

Although Tommy McKinnon, Christian Pacaud, and Robin Stone were great live session musicians, filling the holes left by Lapointe and Gallo on Augury’s tours, I did wish I could have gotten to see the original line-up tearing shit up in the flesh. Looks like I may get my wish yet.

Yesterday, Nuclear Blast announced that Lapointe and Gallo have re-joined Patrick Loisel and and Augury’s other wizardlike guitarist Mathieu Marcotte, restoring the band’s line-up to its original form. On top of that welcome news, the label also announced that the four original members have now begun the process of writing Augury’s third album (or perhaps completing/re-writing).

I haven’t yet seen any timetable for recording and don’t know whether we’ll see a new Augury album this year or next, but I suspect we’ve got something very good ahead of us.

Until then, here’s a reminder of what Augury is capable of doing:

I haven’t seen any indication that Forest Lapointe’s re-joining Augury means that he has separated from Beyond Creation. In fact, this is a good place to share a video from last month showing Beyond Creation performing a new song (“Earthborn Evolution”), which the band says will appear on their next album in 2013: