(Here’s a round-up of recent news and music from DemiGodRaven about Katatonia, Æther Realm, Fear Factory, Shadows Fall, and The Browning.)

Over the past two weeks Katatonia have done a pretty interesting publicity bit on their Facebook page by putting up a picture of what looked like a dead tree branch in some snow and then slowly adding letters and more to the branch, eventually revealing that it was something more of a dead shrub and that the letters would spell an album title and release date for the group’s new upcoming disc.

Now they’ve completed the whole picture, and yes, it’s got branches on it alright, but it is something more than that. It’s looks like a dead bird wearing a crown, and the album title for their new disc will be Dead End Kings. It has an August release date, appearing a day later in the US than in Europe, but the difference of a day really isn’t that huge when you have the internet essentially spreading everything around at light speed. The moment anything from this album is out I’m sure it’ll be all over youtube, so if you have to wait a day you can find solace in at least streaming the songs that way. The image for you folks to check out is above, all Facebook banner-styled. 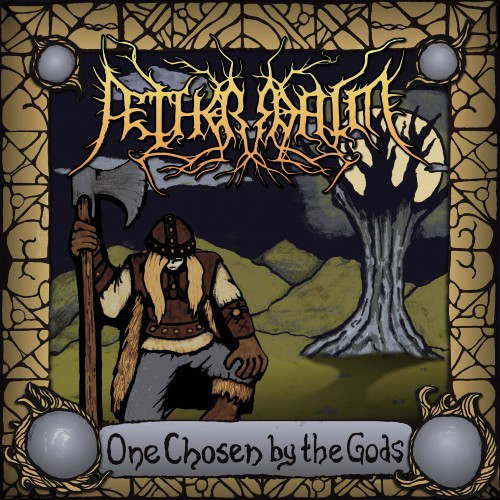 Goddamn, it’s been a little while for these guys hasn’t it? Seems like it was ages and a website ago since I spoke to the band about their EP Odin Will Provide and their upcoming full length, which I do believe they were calling One Chosen By The Gods by that point. Well, the guys have uploaded a song from said CD to the Youtube, as well as provided a mediafire link so that you can download the song for free.

The song has guest vocals from Eric W. Brown, whom I’ve posted about under the banner of Rainbowdragoneyes, but who has also done a ton of work as a drummer for bands like Vale Of Pnath and Swashbuckle. Swampwitch, quality-wise, is pretty fucking good — about as good as their Odin Will Provide EP and much faster paced. Check out the Greenville, NC-based gentlemen’s Bandcamp page here. If that doesn’t work, the mediafire download is here. Here’s the song:

Curious As To How A Shadows Fall and Fear Factory Show Looks These Days? Worry No More!

Rock Hard Live and Capital Chaos have you covered from multiple fronts on the recent Fear Factory/Shadows Fall/The Browning tour that rolled through Sacramento. Rock Hard Live captured the full sets for both Shadows Fall and Fear Factory, which you can check out here and here, respectively, whilst the folks over at Capital Chaos have been keeping things a little bit more bit-sized for those who don’t want to try shoving all of the Dino-sized burger that is a Fear Factory set down their throats by giving us a chunk of The Browning and their dubstep-filled breakdowns here.

Also check out both groups’ video pages above when you get the chance, as they’ve also been adding stuff from the Origin/Aborted tour that rolled through Stockton as well as starting to add stuff from the Warbringer/Destruction tour that passed through here on Friday.