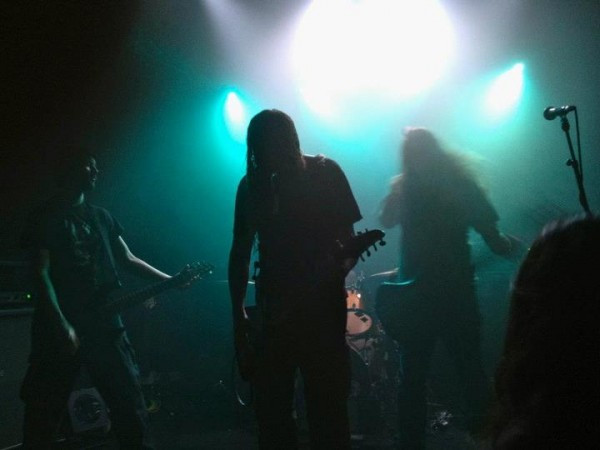 I don’t usually post live videos on this site unless the video and sound quality are in the good-to-great range — which means either pro-quality official vids or above-average fan-filmed clips. That just reflects my own prejudice: I don’t get much out of watching a live clip if the sound is muddy and the images are blurry or too dark. But sometimes the imperfections unexpectedly enhance the viewing/listening experience. I’ve got two examples of what I mean.

I found out about this Swiss band in April because they’d just been signed by Candlelight Records, and I posted about them then. Zatrokrev is a Slavic name; Metal Archives says it mean “Blood For This”. The band’s lyrics are in Czech and Slovak, as well as English, because vocalist/guitarist Frederyk Rotter is Czech-born. I still really like the name of their third album, which Candlelight will be releasing: The Bat, The Wheel, And A Long Road To Nowhere. It may have lost something in the translation from Czech.

When I wrote about Zatokrev the first time, they had one new song on YouTube called “Feel the Fire Pt. 1”, which I liked a shit ton. Since then, I’ve found another one called “Goddamn Lights”, which coincidentally is exactly what I say on post-bender mornings when my eyes open. It’s a fuckin’ good song, too, and I’ll have it for you after the jump. But, as noted above, the main reason for this post is a live video.

On May 4, Zatokrev performed at a venue called Le Grillen in Colmar, France, and a fan caught a couple of the songs on video.You expect a metal band to headbang while performing, but Zatokrev really headbang. If I headbanged like Fredryk Rotter, my head would fly off my neck like a discharged cannonball and punch bloody holes through unsuspecting moshers in the pit, leaving the rest to slip ‘n’ slide on the intestines when they hit the floor.

Or I’d get permanent neck paralysis and, with my luck, be stuck in the head-down position staring forever after at my dick. I’ve seen worse things, but staring at my dick got kinda boring after the first few hundred thousand times, and I’d like to see other sights before my time is up, such as the Eistnaflug festival in Iceland or Dick Cheney in prison.

Now, here’s “Goddamn Lights”. Be careful: it strips flesh down to the bone.

Demonical is a Swedish death metal band. Their 2011 album Death Infernal was one of my favorite old-school meat grinders of last year. If you want chainsaw wreckage coupled with good songwriting, I highly recommend it. It’s loaded with music that manages to be catchy and groovy at the same time as the songs are churning up mass graves into a stew of bone fragments and maggot-swarmed putrescence.

On May 16, Demonical played a set at the Stockholm Deathfest. Yesterday I saw the following fan-filmed video of the band performing “World Serpent”, from their 2009 album Hellsworn. In this case, the vicious headbanging comes not so much from the band as it does from the impulse the music triggers in the listener. Again, the sound is rough and the video is dark, but all that audiovisual murk just makes the song even more filthy. Git some:

You can find Demonical on Facebook through this link.