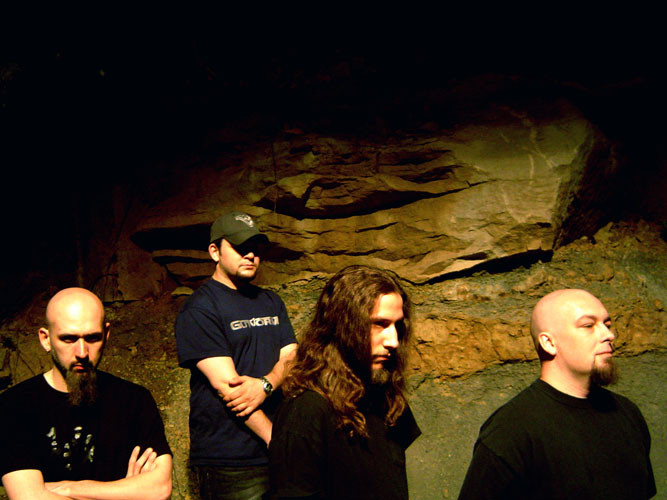 I’m writing this post in the Seattle ferry terminal at 11:45 p.m. on a Monday night, waiting for the 12:15 a.m. sailing that will take me home. But being still awake in a place I’d rather not be, instead of fast asleep in my own bed, turns out to have its compensations. I turned on my laptop, because that seemed like a better idea than staring at the other bleary-eyed derelicts waiting for the same ferry boat, and what did I spy but a just-released play-through video of a new Byzantine song by Chris (“O.J.”) Ojeda.

We’ve been spreading the gospel of the reborn Byzantine since we first found out about their reunion in January. More than four years have passed since their last album, Oblivion Beckons, and it seemed for a long time than Oblivion Beckons was the band’s swan song. But they are back, with the original line-up in place, anchored by Chris Ojeda and Byzantine’s other masterful guitarist Tony Rohrbaugh.

Byzantine was way ahead of their time, and the passage of time has only proved just how far ahead of things they were, because their albums still sound fresh and immediate. I can still vividly remember my wide-eyed reaction at hearing their full-length debut, The Fundamental Component, and then watching with fascination as they progressed through …And They Shall Take Up Serpents and Oblivion Beckons. They’ve already staked their place in the evolution of metal, but they clearly haven’t lost the drive, the song-writing creativity, and the technical skill that produced those albums.

Last night, Chris Ojeda finished tracking the rhythm guitars for the band’s new album, at past 2 a.m., West Virginia time. And to celebrate the occasion, he ripped a play-through of a song called “Pathogen”, which he said nearly didn’t make the cut for the new album. And sitting in the un-cozy confines of the Seattle ferry terminal, I heard it soon after it went up on YouTube, and now you can, too.

O.J.’s beard is whiter than it used to be in Byzantine’s hey-day, but he’s lost no steps when it comes to laying down the firebrand riffage. If this is  a song that barely made the new album, I can hardly wait to hear the rest of them. The band says the new album will be ready for release in November 2012.

One Response to “BYZANTINE UPDATE: THE “PATHOGEN” PLAYTHROUGH”