Here is what will happen:

Okay, okay, I suppose there’s an infinitesimally small chance my prediction is wrong. It could be that you’ll just shut this thing off within 10 seconds and go straight to the hating me part. Either way, you’ll hate me. But I’ll make it up to you — you’ll see. This is how I’ll make it up to you: 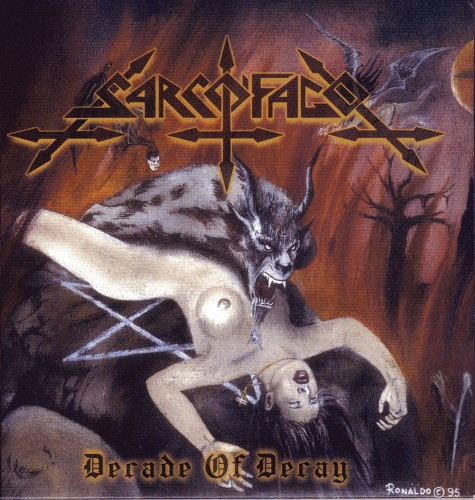 A label called Greyhaze Records is releasing Decade of Decay for the first time in North America, that album being a compilation of 20 tracks by those groundbreaking Brazilian thrashing black/death beasts in Sarcofago that was originally released in 1995 by Cogumelo Records. Here is more info from a press release I received:

“The first release in a series of SARCOFAGO albums set for reissue via Greyhaze by way of Brazil’s Cogumelo Records throughout 2012 and beyond, Decade Of Decay is available here in a 6-panel/full color digipak CD, featuring a full-color fold-out poster with information on all of the songs. Initially released in 1995, official copies of Decade Of Decay were virtually impossible to find anywhere until this new Greyhaze-issued pressing. This reissue of the compilation album includes bonus tracks available here for the first time anywhere, officially. The packaging features never-before-seen photos from SARCOFAGO throughout their various stages, going from INRI all the way to the Hate album. The entire reissue process for this compilation album has been overseen by SARCOFAGO‘s Wagner “Antichrist” Lamounier himself!”

But that’s not all. For a limited time, Greyhaze is streaming the entire album at this location, where it can also be ordered. And because I’m in making-up mode, I’m putting the player here so you can listen immediately:

You will listen to this and you will let bygones be bygones and forgive me for inflicting Eskimo Callboy on you and causing you to hate yourself because of how much you love “Is Anyone Up?” and you will love me again and we will once more be one big happy family, even better than your real family because your real family wouldn’t play Sarcofago at the dinner table, or while you’re taking a bath, which I can see that you’re doing now. Isn’t life grand?

37 Responses to “YOU WILL HATE ME FOR THIS”