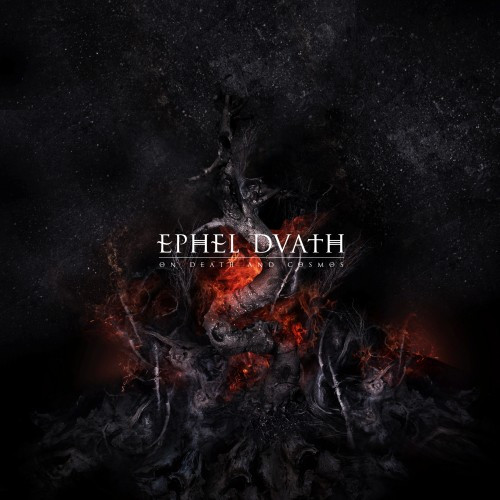 With six albums to their credit between 2000 and 2009, Ephel Duath is a band with whom I should have become familiar by now, but alas, no. It took their new EP, On Death and Cosmos, to finally pull me in. Given my state of ignorance about the band’s past, this review won’t provide a comparison of the new music to what preceded it. I am the proverbial blank slate, on which the EP’s three songs will write what they will.

And maybe that’s just as well, because the Ephel Duath that gave birth to On Death and Cosmos after a nearly three-year hiatus is nearly a new band. Songwriter and guitarist Davide Tiso is still at the helm, but he has changed, wrenched by personal tragedy, economic pressures, and disappointments with the music business. Undoubtedly, those experiences have fed the fires that flow through this EP.

Davide has also recruited an eye-catching company of new names to round out the line-up: ground-breaking vocalist Karyn Crisis (Crisis), who is also Davide’s wife, and legendary bassist Steve DiGiorgio (formerly of Death, Autopsy, and Testament, among others) have joined master drummer Marco Minnemann (Adrian Belew, ex-Necrophagist, ex-Kreator), who also collaborated on Ephel Duath’s last album. In fact, given that line-up, it’s not really a stretch to call this new Ephel Duath a “super group”.

And on top of that, from what I’ve read, it appears that no one Ephel Duath album has sounded much like any of the others anyway. So, let’s start fresh, shall we? 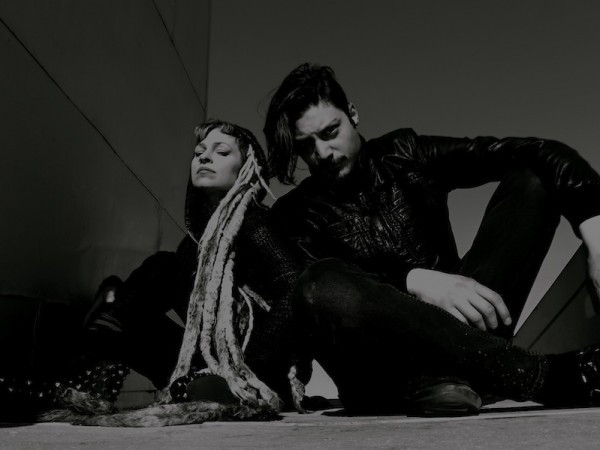 The EP is described by Davide Tiso as “a mini concept album born from a tragic personal loss”, dealing with “the pain of death and abandonment, loss and self-transforming will: a dive into the darkness, that can reveal a new birth in light.”

Musically, the songs are a lesson in minor-key dissonance, driven hard by Tiso’s fascinating guitar work, the notes and chords rising and falling, winding and squirming, squalling and piercing, sludgy and shrill. The melodies are often dark, even strange, building auras that are tense and discomfiting. Yet the music catches you up, as if pulling you into someone else’s waking dream. You follow, bewildered and frequently disoriented. 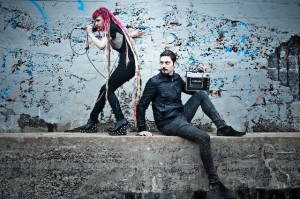 As important as Tiso’s guitar performance to the ambience of the songs are Karyn Crisis’ amazing vocals. They are mainly jagged and harsh, a suite of growls, groans and shrieks, both clawing and stricken. The vocals are often multi-tracked and layered to great effect, perhaps most effectively in “Black Prism”, where high-pitched extreme cleans are added into the mix at brief but key moments.

Yet if On Death and Cosmos is a lesson in head-spinning dissonance, it’s also a lesson in how to make avant grade music that will snap necks like rubber bands and create musical memories that persist.

DiGiorgio and Minnemann are of course key ingredients in the neck-snapping, but their magnetic rhythms are only a part of what they contribute. They’re both tremendously creative and nuanced in their performances, driving the music to even deeper levels of fascination while maintaining an almost uncanny connection to what Tiso is doing with the guitar parts. 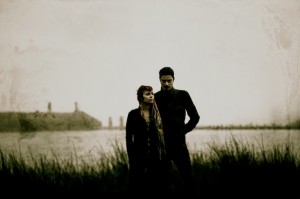 If there is anguish and anger in this complex music, there are also moments of respite, and those moments are a key part of what makes the songs memorable as well as immediate. The relatively soft, slow finish to “Black Prism” and the introduction to “Raqia”, with Tiso’s soulful clean guitar lead, are moments when the music takes on an air of cool jazz, providing a contrasting tone to what comes before and after.

Yet I think it would go way too far to call the new EP an exercise in jazz-metal, as some of Ephel Duath’s previous works may have been. These passages are mood-changers, organically connected to the balance of the songs, but not representative of them as a whole. But judge for yourselves . . .

To date, only one song has surfaced for public consumption — “Black Prism”, which exclusively premiered at Lambgoat. Give to a listen:

For a three-song EP, On Death and Cosmos has received first-class treatment. The EP’s striking cover art was created by French artist Dehn Sora. The EP was mixed by Eric Rutan (of Hate Eternal, of course) at Mana Recording Studio in Florida — a very interesting and unexpected choice for this kind of music. And to round out the production team, the mastering work was done  by Alan Douches at West West Side Music in New York.

The EP will be made available by Agonia Records as a digipack CD, a limited-release 10″ vinyl (in red and black), and a digital download. The release dates are June 21 in Europe and August 14 in North America. Pre-orders for the physical stuff can be placed here.

Ephel Duath’s Facebook page is here. And based on recent FB posts, it appears that Davide Tiso is now fully in the grasp of his muse again, since he’s already working on pre-production for the next ED album.

While I’m going on and on about Ephel Duath, here’s an excerpt from something that Davide Tiso wrote on the ED blog about illegal downloading. It’s not a new subject, and the sentiments aren’t new either, nor are they free from controversy, but it’s one more personal testimonial in support of a point that needs to get across. It took me a while to understand, but I do get it now (as I’ve written before).

It’s about respect for the artist, as much as anything else. The law can’t force respect or stop illegal downloading. It really has to come from within . . . it has to become part of the underground culture, which means it has to be a voluntary decision by everyone who loves metal. A lot of bands want you to have their music for free, but for bands whose members are no longer teenagers or in their 20’s, and for the labels that promote and distribute their music, this is a matter of brute economics. It’s about whether they can continue to do what they do, or have to pull the plug.

“I am overwhelmed by the way new generations feel that everything is owed to them, sometime I would like to close my eyes on this poor and empty digital-addicted society of ours.

When Metallica attacked Napster years ago, the whole thing was probably about greed, but everyone seemed more interested in booing the band instead of consider what Lars Ulrich was actually standing against. Where are we now? Bands nowadays are forced to tour their asses off for most of the year to be able to pay their rent. Some of them don’t make it and they still need to live with their parents past the age of 30. Bands nowadays spend thousands and thousands of dollars printing worthless merchandising to be able to keep touring, while their studio budgets get smaller and smaller and their bellies get wider for all the cheap junk food they are surviving with while on the road. Is this what it means to be a musician today?
When I read that Gojira have their bank accounts in red I am scared for the future of this music I love so much.
Years ago I bet on my band as the only possible future for me: I lost my bet and now I paying the consequences. After seeing how bad things are getting in the music business I’m starting to think that doing a step back, finding a normal job and keep the band going as a part-time thing was the only right thing to do.
Illegal downloading is killing the music business: that bald, ugly, millionaire of Lars Ulrich was right, and I’m here stating that we should have listened to that bastard.”

Tiso’s entire post is worth reading. Go HERE to do that.

3 Responses to “EPHEL DUATH: “ON DEATH AND COSMOS””