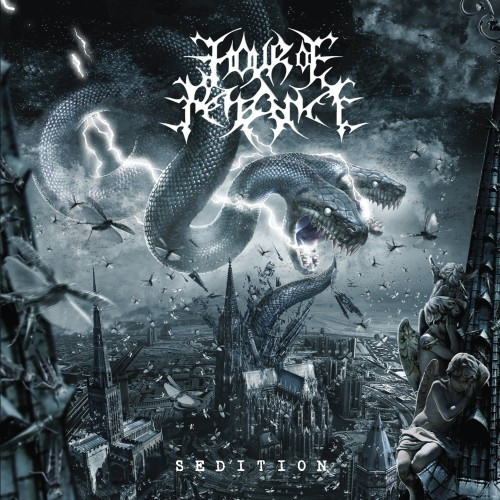 (DemiGodRaven turns in this review of the latest release by the Italian death metal stallions in Hour of Penance.)

The fact that it has taken as long as it has for this review to be written is a sign that someone at NCS should get the shit beat out of them. I will gracefully bow out of this equation since I feel I am already doing my part by penning this, so I highly recommend Andy . . . mostly for kicking out a Whitechapel review as I was 1/4 of the way through one of my own and saying everything I was going to say.

It has been a solid couple of months since Sedition saw release, and I have spent the entire time getting my face beaten in by this disc. Hour Of Penance are one of the highlights amongst the Italian death metal scene at the moment, only recently really vaulting themselves into the spotlight, just as brethren and kin Fleshgod Apocalypse have really begun to capture people’s attentions. To say that the bands share some similarities isn’t a statement meant to imply that Hour Of Penance are derivative, it’s just a statement of fact. The bands have been intertwined throughout their histories, as one was launched from the other.

Whilst Fleshgod have taken a more orchestral route filled with blastbeats and ridiculously over-the-top operatic vocals, Hour Of Penance have followed the much darker, more brutal route in their music. Whilst one band have chosen to overwhelm the listener with sheer bombast, Hour Of Penance apparently decided that with Sedition they were going to bludgeon everyone. If Agony was 2011’s death metal kick in the ass for the mainstream, then goddamnit, Sedition should be 2012’s. 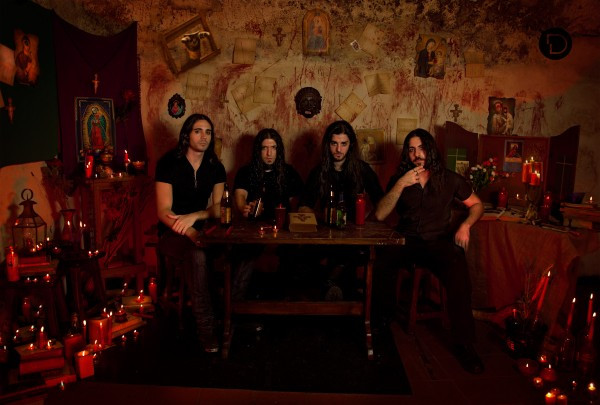 Sedition is a fast monster of a disc. With only eight actual songs and one quick choral instrumental in order to kick everything off, the whole experience wraps itself up in thirty some odd minutes. The first pass through this album is almost like being whipped around in a tornado and just getting battered by all the debris, and then assuming you survive, getting chucked out of the other end and wondering where the hell it came from. It’s almost amazing in its brevity. It’s one of the few times where I haven’t thought that an album in this style of music went on for just a tad too long.

Given that the band comes from the school of “Go as fast as possible whenever we can” death metal, there are virtually no moments of respite from the aural bludgeoning that Hour Of Penance dispenses. It’s one of the main attractions to this current brand of death metal — hearing people go at almost inhuman speeds, with the whole thing beginning to sound like tightly organized chaos.

Speed and blasts alone, however, would not be enough to keep anyone excited about a disc like Sedition if Hour of Penance weren’t capable of writing a song in the first place. They are. Each of the eight tracks, post-intro, has its own little groove, and that includes the title song, one of the slower tracks and likely one of the first that many of us heard as promotional activity began gearing up for this release.

Hour of Penance are a band who are constantly at risk of becoming just a mess of blasts and growls, and how they manage to avoid that I couldn’t tell you, but they need to send a quick memo out to other groups in this genre because, clearly, they’ve discovered whatever ritual must be performed to avoid such a transformation.

Each song builds to some of the best guitar riffs out this year, and each song’s lead has become increasingly memorable. “Enlightened Submission”, for instance, spends a bit of time dwelling in the absolute violence that it builds, but then quickly starts a stuttering guitar riff propelled almost solely by blasts and other insanity behind the drum kit.

I would also be remiss if I didn’t mention one of my personal favorites, the followup “Decimate The Ancestry Of The Only God”, a song with a title that begins to verge on Nile song-naming territory. The whole opening minute is just great. It sounds like it’s going to be another bludgeoning from the get-go until the whole thing stops for a quick guitar lead at the thirty-second mark, as if vocalist Paolo Pieri felt the need to have a quick breather, to make a statement of fact about what the song was about in lyrical form, and then proceed to unleash chaos upon the listener.

Thematically, Hour Of Penance stay pretty damn close to their wheelhouse of God, death, and the various details in between. This won’t come as too much of a shock for those of us who have been following the band for a bit and were aware of previous releases Paradogma, The Vile Conception, and the earlier siblings of those releases. It’s common subject matter for death metal, so lyrically you know what you’re going to be walking into when you come across a song like the aforementioned “Decimate…” and another one entitled “The Cannibal Gods”. However, like everything this band have done, they’ve refined their lyrical imagery over the span of a pretty storied career down to an exact science. That said, the vocalization of the lyrics moves at a percussive pace on Sedition, keeping up with the drumming and the whirling guitars.

Drummer Simone Piras, part of the lineup shift that happened with Hour Of Penance in 2010, turns in a monstrous performance here. Although it’s an incredibly consistent ass kicking throughout, any drummer who can relentlessly blast his way through a song as well as he does is still incredible to me. It literally does not stop. Any time when songs slow down, it is as if he then summons them up as an almost otherworldly being. Production-wise, he rings through loud and clear, too.

Sedition sounds really good overall. Even as the guitars are constantly abuzz, if you sit down you can still pick up whatever intricacies lay in the attack from Guilio and Paolo. In comparison to the group’s previous release Paradogma, which had a little bit of a hollow-room sound to it that was very much in line with the music of bands such as Behemoth, Sedition is more in line with the band’s death metal peers. While it doesn’t quite have the super-oppressive atmosphere that Paradogma had due to it’s production, the bludgeoning effect is in full force because everything comes through so much more clearly.

Hour Of Penance are veterans of the Italian death metal scene and have survived somewhat recent changes (by current standards, having shifted in between their most recent two discs), stepping forth into the new spotlight shining upon them in excellent fashion. Sedition is the type of album that should grab people by their hair and force them to listen to it. It’s a short, solid beating through and through, expertly written and with enough groove to make each song memorable. Though a little bit on the short side, it’s one of the year’s death metal monsters and has earned Hour of Penance the right to sit at or near the top of the heap.

EDITOR’S NOTE: Sedition is out now on Prosthetic Records.  HOP is on Facebook here, and those of you in Europe can catch them at Hellfest Open Air on June 17.

Today, I learned that drummer James Payne (Hiss From The Moat, Broken Heart Collage) has joined the HOP lineup, and will be playing with the band starting at Hellfest this weekend. To get a taste of his talents, you can head over to Sickdrummer.Com to watch a video of him playing the track “Enlightened Submission” off of Sedition HERE.

Now here’s the official lyric video for “Sedition Through Scorn”:

6 Responses to “HOUR OF PENANCE: “SEDITION””