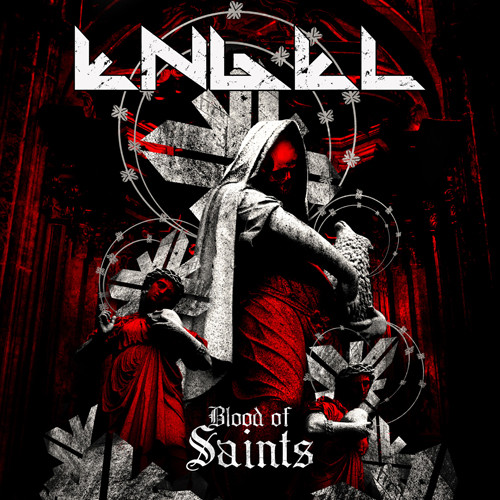 Engel are a weird band in a weird place. They’re one of the bands who are pretty much epitomized by the much-maligned ‘modern metal’ tag because they try to hybridize so many different elements in their music in order to distinguish themselves from the rest of their scene. In that way they’ve always felt like a continuation of a few of the band members’ previous project, Passenger.

They’re not ashamed to write something that would be worthy of radio play and, likewise, pretty much refuse to stick with one genre for a whole song. They’ve also been very prone to work in many electronica elements, not just keyboards but also full-on trance-worthy segments in an attempt to add texture to their music. This has resulted in very jack of all trades, master of none, dynamic. Sometimes they will absolutely nail it and other times they come off a little too bland for their own good.

Surprisingly, I fell in love with the one time they really played it safe, in the song “Six Feet Deep”, but otherwise the group’s prior disc Threnody (and it’s 47 different releases) was a hit or miss affair that left just enough positive residue in my system that I was inclined to  look into their latest release, Blood Of Saints. 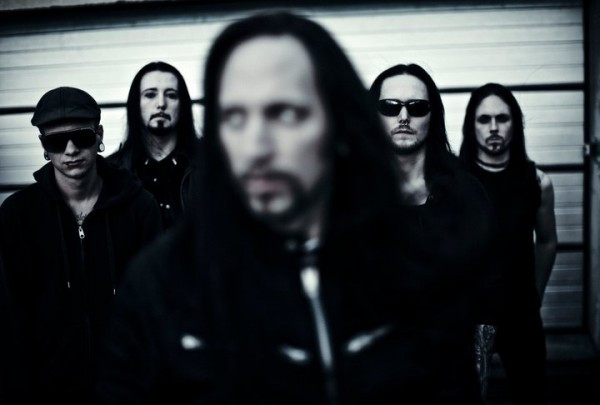 Outside of the damn good cover art, Blood Of Saints is once again a rather strange experience. There probably aren’t a lot of Engel fans who will be stunned to hear this, but the band who incorporate a ton of different electronica elements have once again performed a chameleon act and added even more to their style.

Now, there are some very light dubstep elements in the mix that pop up every once in a while. They make up a key part of opening track “Question Your Place”, although the actual -step parts themselves are a little bit on the weak side. Yes, they contain the texture of something you would hear in a dubstep song, but they lack the meat, so they actually come off as more of a very weird guitar effect.

It also serves to highlight just how formulaic a lot of the more commonly referred to bro-step has gotten. It literally pops up to highlight every four in the song and pops up again at the end of each verse. Also, Engel perform something of a dubstep breakdown in the song, and although they’re not the first nor the best at it by any standard, it is at least tolerable and short. Those elements eventually surface again in songs like “Down To Nothing” and “One Good Thing”, though buried a little bit more in the background.

Beyond this aspect of the track, “Question Your Place”  is actually a pretty catchy song, carrying a bit of synth line to bring forth the main melody and a sing-worthy hook. Of course, this is assuming that you’ve gotten somewhat used to lead singer Mangan Klavborn’s vocal style. The guy has some solid as hell screams, but man, is his singing as polarizing as ever on this disc. He can carry a tune, but still, I can forgive anyone who can’t get into the guy’s slightly whiny register. 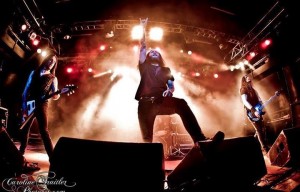 Perhaps surprisingly, quite a few straightforward rock and recognizably metal songs populate this disc. Followup tune “Frontline” sounds like something that could’ve just as easily been the audio track to a montage on the old MTV Real Sports TV show. It’s as radio-rock as this album gets, jumping into a solo within the first thirty seconds and then sticking to some straightforward as hell cheese. I actually quite enjoy this song because of that. “Frontline” is almost shameless in what it is trying to be and is catchy because of it. It’s the musical equivalent of slamming a whole bag of Starburst down your gullet in about twenty seconds.

“Cash King” is another one in the same vein. Since Engel have never really had any pretenses of being a full-on metal band (c’mon, they list themselves as disco on Facebook), they sort of get a pass on stuff like this. Doesn’t necessarily mean what they’re doing is going to stick out to the fully attuned metal listener, or hell, in my case even be tolerable except for every once in a while, but occasionally some 80’s-style twin guitar shredding like the solos in “Cash King” can be just what you need.

You do still wind up with some heinous as hell stuff on Blood of Saints. The song “Drama Queen” is a little bit on the cringe-worthy side; the music is fine, if perhaps a little bland, and a lot of the cringing comes down to the lyrics, with the line ‘No one needs a bitch like you’ being particularly gauche. That and the less said about the closing ballad, the better.

This is going to sound like an awful thing to say, but I feel I need to mention both Steve Drennan and Jimmy Olausson right now, because they make up the rhythm section of the band. They play bass and drums, respectively, and the reason I need to mention them is because Engel don’t exactly write the type of music where they get to shine. Engel are certainly not a tech-death band, and Steve isn’t armed with a fretless where you get to hear him dance across every single note, but both guys turn in solid backing performances for the music they’re playing with.

There are a couple of surprising double-bass rolls, but in the grand scheme of things they pop up right where you’d expect them to be, including the incredibly chunky, Whitechapel-esque. deathcore-attuned breakdown that happens for about…ten seconds on this disc. It doesn’t last long before Engel drop into a surprisingly clean chorus, but it is one of the few times where everything is low enough that the rhythm section becomes the star.

The rest of the time you’re riding along with the triplet and vocalist Mangan Klavborn (and his septum) and the twin guitar attack of Niclas Engelin (whom some of you may recognize as the new guitarist in In Flames, even though he’s had this band for a while) and Marcus Sunneson. They get the most free reign on this disc outside of the various synth and electronica elements. 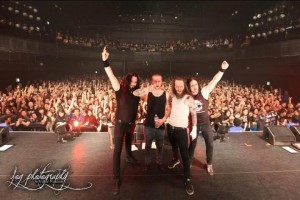 That’s the nature of the beast with this type of music, though. They write some great leads and do solid on the rhythms for each song, so nothing sounds out of place, and they clearly have some skill, making this stuff sound as put-together as they do with the electronics flying all over the place. The only depressing part is that sometimes it seems that the songs are a little too reliant on bland power chords, driven by a desire to pack another power-chorus into the mix.

Blood Of Saints, like its predecessor Threnody, is an interesting experience. It includes a couple of straightforward rock tracks, some heavy metal, the occasional ballad, and some tracks that verge on techno. While it sucks that the tag ‘modern metal’ has been applied to these guys in lieu of, ‘We have no idea what the heck to call this’, Engel are, at the very least, recognizably different.

I also walked away with a better experience than I did with Threnody, which means, at least for this listener, that hope springs eternal for the band. It’s probably more three-fourths than half-and-half this time, and as on Threnody, Engel do occasionally find places where they just absolutely kill it.

They’ll probably forever be the jack-of-all-trades band, but hey, the shotgun approach to music probably works just as well as a more focused approach in attracting people. Engel are brave for doing it, because I’m sure they probably catch a ton of shit for even working light electronica elements into their music. At worst, the music is solid and passable, and at best you get a good listen.

Blood Of Saints is strange, so you might have to give it a couple of listens to decide if you really like it — but I won’t blame you at all if you become hooked.

And now here’s the band’s official video for “Question Your Place”:

4 Responses to “ENGEL: “BLOOD OF SAINTS””