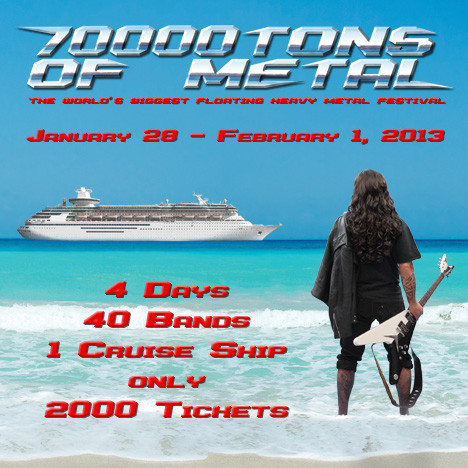 Aw jeez, yet another metal armada is going to be polluting the pristine waters of the Caribbean with filthy music and even filthier passengers. Yes, all you swabbies and swabettes in the audience, 70,000 Tons of Metal is back for their third cruise, setting sail from Miami on January 28, 2013, for five days and four nights of heavy drinking and loud music.

It seems like a decade ago when this grand-daddy of the floating mosh pits embarked on its maiden voyage. (Can a three year old be a grand-daddy?), but it was only in January 2011.  Ah, well do I remember the fun I had with this concept when it was first announced. I made running jokes about it throughout 2010, and then had to eat crow when it turned out to be a blast (or so I heard). And then they did it again earlier this year, and now they’re starting to roll out news of the third installment.

Once again, the cruise operators are planning to have 40 metal bands on board playing non-stop, open mic nights, clinics, work-shops, metal karaoke, and of course bars that never close. They haven’t yet disclosed the island destination where the ship will vomit forth the pasty-faced black-clad throngs to horrify residents and unsuspecting tourists, but they have announced the first 10 bands who’ve signed on for the cruise this year. Talk about a strange, motley line-up:

This is such an odd and varied assortment. If I were going (and maybe I will), I think would spend about a third of the time headbanging hard and about two-thirds of the time hunkered down in my bunk with cotton balls stuffed in my ears and a bottle of whiskey cradled in my arms.

But hey, there are 30 bands yet to come, and we will be getting the slow, water-torture drip of new band announcements from now through the fall, and maybe that ratio of headbanging and hunkering down will change.

Also, think about the timing: If you had no job or school and lots of extra cash lying around waiting to be burned up in ocean-going extravaganzas, you could do this:

Dry out at your favorite detox clinic.

Hell, there’s probably some European cruise scheduled in between December 10 and January 28, so by shelling out for airfare you could just skip the detox part.