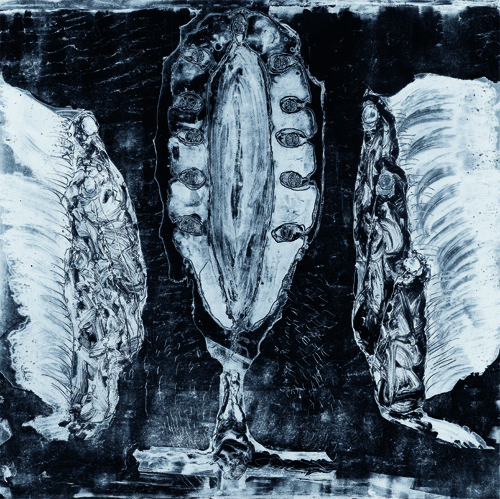 By the way, I wasn’t kidding about the non-stop snare attack — it consumes the vast majority of the drummer’s repertoire (along with a healthy dose of brutish double-bass), but man, I do dig it.

If anything, Antediluvian’s three songs are even more inhuman and remorseless. The guitars crackle with seething distortion, veering from an apocalyptic barrage of fury to slow bone-cracking hammer blows to a droning miasma of static. Shrill shrieking noises and howls of feedback penetrate the murk, and muffled drums blast away underneath like the sounds of a distant battleground.

As in the case of Adversarial, Antediluvian’s vocals are slow, horrifying, and cavernous — so inhuman that even an adjective like bestial is an understatement. And like Adversarial, running throughout Antediluvian’s ritualized cacophony is a dense weave of intricate and rapidly shifting chords, perhaps most prominent in Antediluvian’s final song, “Ehyeh Asher Ehyeh (I Am That I Am)”, with its widely varying tempos and prominent bass notes. 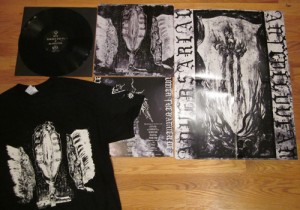 This split is about as complete an expression of voraciousness and utter doom as you could want. You want to run, but the music roots you in your place, too transfixed to seek a hiding place before the obliteration is complete.

NWN is selling different versions of the vinyl, which can be ordered with a tremendously cool t-shirt, at this location. You can find the bands’ Facebook pages via these links:

Now, here’s the music, courtesy of the NWN Bandcamp page: