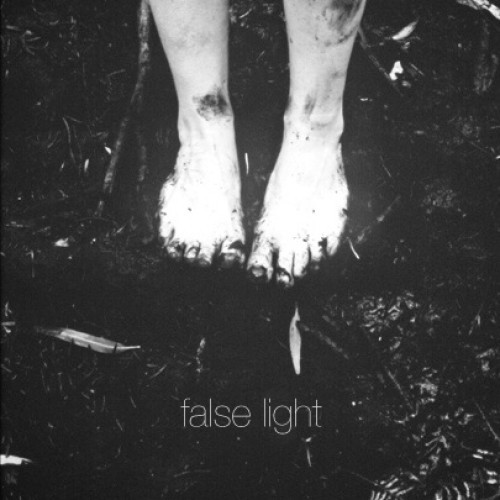 The last time I made one of these MISCELLANY excursions was in late April. It may be September before I do another one, or it might be tomorrow. As you know, planning isn’t one of my strong suits, nor is impulse control.

Because so much time has passed since the last one of these installments, here’s a refresher on the rules of MISCELLANY: I randomly pick a few bands (usually ones who are pretty deep underground) whose music I’ve never heard and whose names are new to me. I listen to one song (but sometimes more than one — see above re lack of impulse control), I record my impressions here, and then I stream the song(s) so you can make up your own minds about whether further exploration would be worthwhile.

For these excursions, I used to pick bands from a running list of names drawn from the e-mails we get every day from bands, press agents, and readers, or from things I see while browsing the interhole. The list got so long and I got so lame in writing these posts that I gave up on updating the list. Now I’ll just have to go with whatever I’ve seen recently, based on . . . impulse.

Today’s MISCELLANY candidates are False Light (U.S.-Charleston), Røsenkøpf (U.S.-NYC), Depravation (Germany), and He Whose Ox Is Gored (U.S.-Seattle). As it turns out, all of the songs I heard for this post are available for free download. 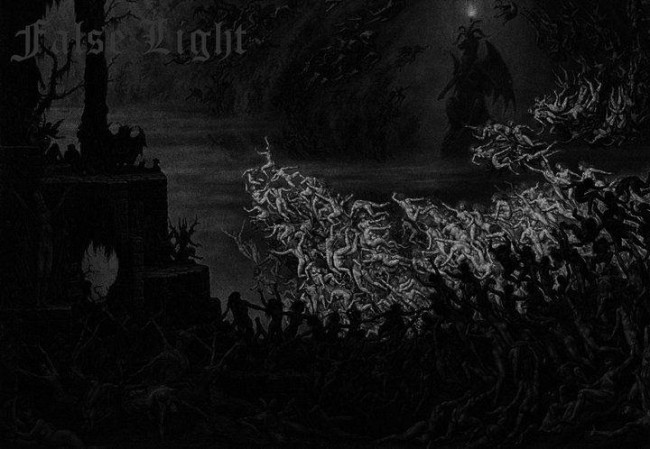 I saw False Light’s name in a recent CVLT Nation post. Based on that review, I decided to sample the music from their recently released self-titled record, which is streaming on the False Light Bandcamp page. I bent the MISCELLANY rules right off the bat because the first song was so short, and because it was so easy just to let that Bandcamp player propel me onward to the next song. Also, I fell in lust with the music. In the end I listened to the whole album; after all, the first five songs add up to less than 8 minutes total, and even though the sixth and final track is almost six minutes long, I stayed for that one, too.

The first five songs rattled my brain good and hard with a full-tilt blast of distorted, grindy, crusty powerviolence, like a firehouse spewing gouts of burning napalm. To switch my metaphors, False Light screech, skid, and collide like some unstoppable black road machine that’s trying to smash every goddamned thing in sight — fast, then downshifted, then pedal to the floor, belching smoke and fire.

The psychotic vocalist screams and howls with vein-bursting fury, the head-cleaving drummer shifts the patterns inventively, the riffs are remorseless but really fuckin’ groovy.

And then there’s that suffocating sixth song: it’s a fuzzed-out, sludge-filled, down-tempo brute of a track bent on smashing the listener into paste with sonic sledgehammers and then burying the remains in tar. I fuckin’ loved every minute of this brilliant EP. Here’s what I heard:

You can download the album from that Bandcamp page — here. Last time I checked, False Light had run out of free downloads from Bandcamp and they had a mediafire link on the right side of the page so people could still get the music for free. They have a Facebook page at this place. 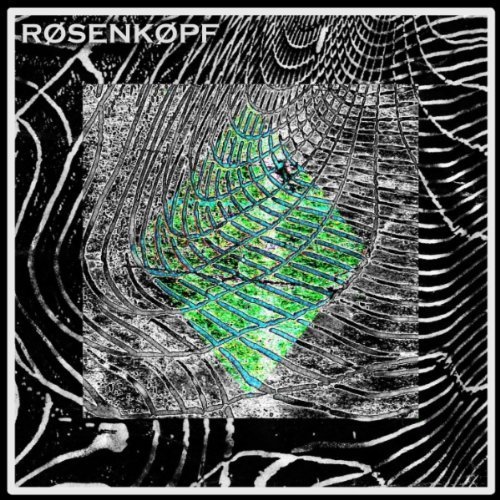 I also found Røsenkøpf through a recent CVLT Nation post (which includes some live footage of the band), and discovered that they had a Bandcamp page where one song is streaming. It’s called “Burning Spirits” and it’s from a debut LP that Brooklyn’s Wierd Records released in May. So that’s the next song I heard as part of this MISCELLANY expedition.

At the beginning, I thought I knew what this was . . . some kind of goth-tinged electro/industrial pablum that would ultimately prove dull, even if the rhythms moved me almost instantly. I was wrong. 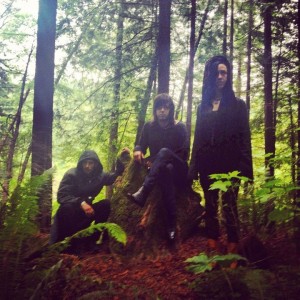 Yes, there is a pulsating electro quality throughout, and it’s a damned hooky beat, but it’s merely a foundation for a crazy construction project, or a thumping heart that pumps blood through a twisting vasculature that’s growing around it.

I’m feeling the first clawing sensations in the gut that signal an incipient addiction, in this instance an addiction to Røsenkøpf.

“Burning Spirits” can be downloaded for free at the band’s Bandcamp page. Røsenkøpf also have a blog here and a Facebook page here. The self-titled album is available from Wierd Records in vinyl and on CD (this page includes audio clips from all the tracks). I also found it as a download from Amazon mp3 for about $6, which I gladly paid. Here is “Burning Spirits”: 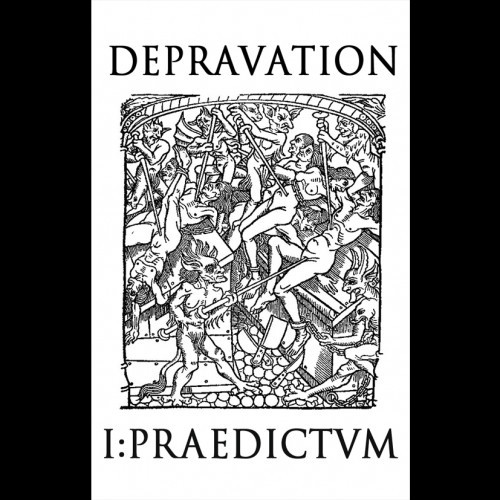 For my next stop on this MISCELLANY tour, I visited Gießen, Germany, home of Depravation, who e-mailed me recently about their three-song demo, I:Praedictvm. The band is new; they didn’t come together until December 2011, and they DIY-recorded the demo track in March. They transferred the music to tape, limited to 50 copies, and hand-numbered in human blood. All well and good — they are following a kvlt ethic. But what about the music?

The music is a raw, distorted fusion of hard chugging and hardcore vehemence with a pronounced black metal aesthetic. I found it impossible not to headbang to “Wrath”. I got caught up in the tremolo-led dark melody and mosh-ready blasting that populate “Ruins” (and got really weirded out by the creepy Germanic outro).

And then the nearly ten-minute long “PRAEDICTVM” threw me a curveball. It’s an atmospheric synthesizer piece — slow, shimmering, and darkened by shifting shadows and flitting wraiths. It includes both classical symphonic elements and an ambience of hypnotic blackened shoegaze. It’s nothing like the first two songs, but proves that Depravation have multifaceted ambitions and the talent to achieve them. Here’s what I heard:

I:Praedictvm is a free download on Depravation’s Bandcamp page (here) or via this link: 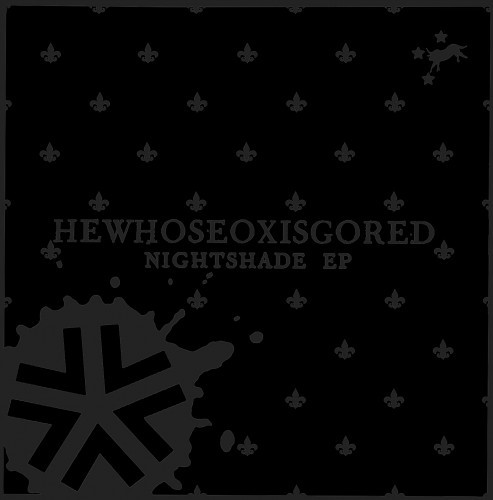 I found out about this Seattle band from one of the people (Alexis) who started NCS with me 2 1/2 years ago. She knows one of the people in the band (Lisa) and has heard them perform. They recorded a three-song EP (Nightshade) with Chris Common in his Red Room Studios, and they’re currently prepping the release of two vinyl splits, one each with They Are All Dead of San Francisco, and In Aeona of Boston. They describe their music as “doomgaze”.

Conveniently, OX have a Bandcamp page (here) where two of the Nightshade tracks can be streamed and downloaded (“name your price”). I listened to both of them. “Charming the Snake” clocks in at just shy of 8 minutes, with chiming bells announcing a phalanx of fat, mid-paced post-rock riffs and back-breaking percussion. The song moves convincingly through changes in tempo, finds a sweet groove with a repeating near-clean guitar motif and cascading keyboard ambience, and then ends with a sludge-doom trawl for lost souls. Captivating shit (and I was glad to find that the brief vocals are hardcore instead of clean).

“Nightshade” lets the keyboards carry the melody for a while, surfing on waves above ticking guitar licks and clattering drums, until another series of repeating guitar riffs just pick you up and carry you away. Both crushingly heavy in the low end and ethereal in its heights, “Nightshade” is a real winner.

He Whose Ox Is Gored should appeal mightily to fans of bands such as Pelican and Russian Circles. They sure as hell are appealing to me.

You can find He Whose Ox Is Gored on Facebook via this link. Here’s the music I heard: