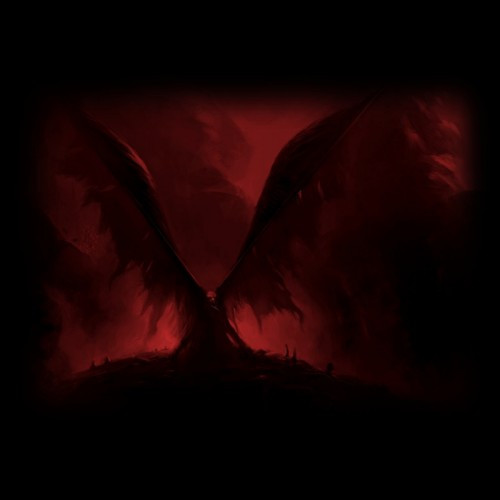 To all of you red-blooded, blackhearted Americans out there, Happy Fucking Fourth of July. I will be very disappointed if you actually plan to join in that great gorging of gullets with grilled food and cold beer that passes for patriotic observance. Instead, I expect that, like all trve metalheads, you will kill your neighbor’s dog and try to eat it raw, like this dude.

Well, now that we have the gratuitous tip of the hat to the Grand Old Fourth out of the way, let’s get to the real point of this post . . . which is to take stock of the first six months of metal in this glorious year of 2012. I nagged our regular (and formerly sort of regular) writers to give me lists of their favorite albums of the year so far, with mixed success. Some complied, some couldn’t be bothered — which doesn’t bother me, because I’m not putting together such a list myself. Instead, I want to learn about albums I should be hearing by perusing other people’s lists, which is a lot more fun and a lot less work. I may not be smart, but I’m not stupid!

And if you think I’m going to be content just nagging our own writers for their lists, you would be wrong. Because I WANT YOUR LISTS, TOO! Yes, I would like you to stop eating your neighbor’s liver long enough to add a Comment to this post and tell us which albums this year have really caught your fancy — the ones you’ve been listening to the most and think are the best ones among those you’ve heard in 2012. And while you ponder that, let’s have a look at the Best Album lists of BadWolf, the Professor formerly known as groverXIII, DemiGodRaven, Phro, and TheMadIsraeli. Feel free to comment on their lists, too, but please don’t eat them.

NOTE: I asked these guys for their lists in early June, and some responded quickly, so new albums that have come out over the last 2 or 3 weeks may have been missed. Also, as I hope everyone knows by now, groverXIII (now known as Professor D. Grover the XIIIth) started his latest blog project — Oculus Infernus — since answering my request for his list, and if you still haven’t yet checked it out, you should. Also, let me also toss in a plug for Phro’s site, Phro Metal, where every week he publishes short sci-fi stories that will make your head spin (or, in the case of most of you, spin faster).

Dear readers, 2012 only just passed the halfway mark but already has gone down in my ledger as a great year with a bumper-crop of great albums. Just how good? A comprehensive list of albums that I felt were solid front-to-back would just collapse into senseless mush. As such, I’ve compiled a shortlist of records that I’ve simply listened to more than the rest (Sorry Napalm Death, Unleashed, Nile, and Cattle Decap–I think you will get more as the year goes on!), and as such, it is over-populated with old favorites. I expect the strong debuts to crop up more later in the year.

I have identified a few salient trends defining 2012, so far. Nearly every album on my list falls into this category.

2) amazing sophomore releases by bands with great debuts in 2010

2) melodic doom knocking shit out of the park

4) not-quite-metal music made by metal musicians, usually instrumental, or ambient.

5) and this may be the most important: 2012 is the year of female-driven clean-singing classic rock worship wearing a metal aesthetic. This style is going to spawn so many imitators in the next three years that you’d all better get your fill right fucking now. Thank god almost everyone indulging in this right at the moment is fantastic.

Witch Mountain – Cauldron of the Wild

I am so fucking behind this year. I’m struggling to barely keep up with the major releases, let alone all the underground releases. Hell, I just found out someone’s in jail. Still not sure who, though, maybe I’ll figure that out next year. My point is: this is my list of the best albums that I personally have gotten my dirty little tentacles around and shoved in my ear holes. Your mileage may (should?) vary.

In no particular order at all…

I’m not a Cannibal Corpse scholar (I’m not sure if such a thing exists, but if it doesn’t, let’s make it happen), so maybe this album is just old hat to you. But I enjoyed it. It made me feel like chopping people up into small pieces, freezing the pieces, and then making them into shuriken to harangue children with. What more can you want from death metal?

Favorite Track: “Encased in Concrete” (Mostly for the sing-a-long value at the end of the song)

Right. Like this isn’t already pretty much album of the year for everyone and their headbanging grandmother. Whatever, it’s Napalm Death destroying shit with chainsaws and flaming saxophones.

Favorite Track: Don’t really have one here…sorry, you’ll have to form your own opinion on this one without my divine guidance.

I pretty much agree with TheMadIsraeli’s review on this one. I will say that I really liked the vocals on this album. Dude sounds like a snarling demon dog. Or maybe just a regular dog who smokes too much…

Favorite Track: “From Womb to Waste” (Mostly because of the audio sample. Makes me giggle.)

Yeah, I’m kind of in love with these guys. You know what? I’m not sorry, and fuck you if you have a problem with it. Every time I listen to this promo, I feel like chopping my dick off, replacing it with a ten inch long piece of very sharp cutlery, and then going around to summer festival slicing watermelons in half with it.

Favorite Track: It’s only 7 and a half minutes long. The whole thing is my favorite track.

When I first started listening to metal, 3 Inches of Blood was one of my favorite bands. I still think their early albums (Advance and Vanquish and Fire up the Blades) are a great way to transition from traditional or power metal to more extreme metal. Still, this album is much more in the traditional metal vein, with fewer growlies or howlies or angries. It’s just good, old fashioned rocking out. I skipped the previous album (Here Waits Thy Doom), so I can’t tell you how it compares. Sorry.

Favorite Track: “Leather Lord” (Cam Pipes might be better at the “Painkiller” voice than Halford.)

It’s Aborted being Aborted all over your goddamn carcass. I loved the shit out of this album, as I do with pretty much every Aborted album. I am going to go on record here and say that I think Sven de Caluwé has one of the most distinctive death metal voices I’ve heard. Fuck you in the eye with a straw if you disagree.

Favorite Track: “Our Father, Who Art of Feces” (I just like the name.)

This album just makes me want to run around screaming in people’s faces. Also, I don’t know what a death hammer is, but I want one.

Favorite Track: “The Westboro Massacre” (While I do like the name, this song grabs you by the throat and tickles your toes until you pee. Awesome.)

This is more nostalgia for me than anything. If you know who Eve 6 is (i.e., if you were in junior high school/high school in the late 90’s/early 00’s), you already know if you like this album. I’ve always enjoyed Eve 6, and I thought this album was a solid return for the band. No, it’s not metal, but neither is your mother and I still enjoyed fucking her stupid last night. You’ll get over both of those things.

Favorite Track: “Downtown” (Mostly because of the lyrics, but also the song always gets stuck in my head.)

I know I missed a lot of albums, so if your favorite album isn’t on this list, it’s probably because I thought it came out last year. Or next year. I’m really bad with dates.

There have been so many good albums out this year so far. In the end, I think for metal this has been a far better year than 2011 was. My favorites of 2012 to date are pretty easy to figure out, though. Some albums have just been so far and above the rest to me, and here they are:

Outcast proved to me, once again, that they are one of the most underappreciated and overlooked bands out there right now. Their combination of thrash metal, death metal, djent, and Gojira-esque megaton crushing groove created an album that left me destroyed.

This album is just off the fuckin’ chang SON. Cattle Decap have never been this tight, this fast, and this obscenely brutalizing until now. Let’s not forget those melodic vocals that sound like a gang of vomiting zombie pirate cows waiting to devour you.

Progressive melodic death doom always wins with me, but this album? Just utterly otherworldly. It’s masterfully executed and filled with compelling song writing, along with enough grimness and sorrow to force you to contemplate the worth of your own life.

Once again, progressive melodic death doom. In Mourning are on a roll, three killer albums in a row. I’ve always loved this band’s music, it’s so full of power, majesty, and sadness. The only thing that could compete with this will be the new Daylight Dies when it comes out.

More of the trademark Gojira sound, although slightly stripped to the bone for simplicity and precision’s sake. The groove of “Liquid Fire” or the titanic sinking opening blitzkrieg of “Explosia” are enough to get any sane man committed to an asylum.

Alrighty then, there you have lists from some of our current and former writers, just to get your mental gears turning. What 2012 albums/EPs have been hitting your sweet spot this year?