(Despite the fact that this week marked the anniversary of America’s declaration of independence from Great Britain, Andy Synn has persisted in writing a review of UK metal every day this week. Today, his subject is the debut album from Ancient Ascendant.)

Greetings again loyal readers, NCS addicts, and new meat. This here is the penultimate entry in what I have dubbed “Unofficial UK Week” for me here at NCS. You’ll already have seen three other reviews on UK bands, and this here is the fourth and final album review of the week. Tomorrow, as my last entry in the series, you’ll be seeing a Synn Report on a brilliant UK act with four full albums to their name, but who have been unfortunately inactive for a while now.

For today though you’re getting a taster of the polished (and, somewhat Polish-ed) death metal assault of Ancient Ascendant!

This UK four-piece may be something of an oddity to some of you. A young(ish) band of ne’er do wells who ply their trade in the murky waters of death metal, there’s nary an ounce of fashionability nor trendiness about them. Yet while The Grim Awakening is an album steeped in the blood of old-school death metal, particularly of the Polish and Floridian varieties (rather than the scrambled buzz-saw attack of the Stockholm scene), it is clearly played and written with an uncompromising modernity and professionalism that updates their influences with a storming sound and youthful vigour. 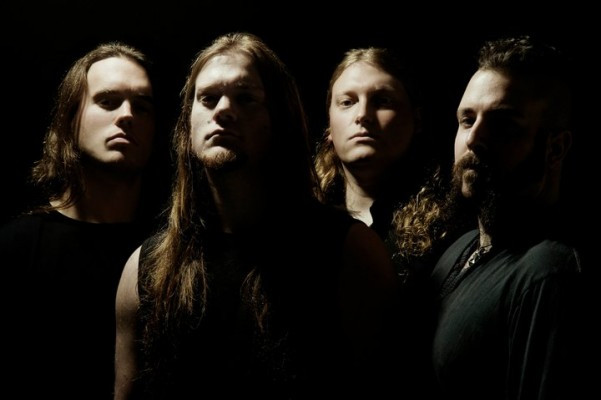 Punchy opener “The Scorn Of Dead Men” immediately brings to mind a more thrash-influenced Bloodbath,with its kerb-stomp rhythms and frantic riff-work. The roaring vocals wash over the listener like an open furnace, while subtle leads add a touch of clandestine melody to the proceedings. It’s a song that doesn’t feel like 5 minutes, but which packs in a hell of a lot, leaving no room to spare.

Follow-up “Once Numb” takes a page out of the Vader playbook, its crushing, minimalist riffs based around simple motifs but delivered with clever style and controlled rage. A rolling avalanche of a song, it bears down on the listener relentlessly, the drums shifting between sharp, syncopated patterns of kick-drum cleverness and full-bore blast-frenzy. The bass is also given a striking presence, its serpentine licks adding to the cataclysmic atmosphere of the song, while the harsh-throated vocals spit out a series of vocal hooks that should have Witchery turning corpse-green with envy.

The bass-and-drum-led intro to “Bleeding In Exile” shows another side to the band, eventually jumping out at the listeners to grab them by the throat with its choking riffs and barbed melodies. The  clever interplay of lead and rhythm guitars and the pulsing, insistent throb of the drums are tailor-made to get the heart beating erratically and the body moving spasmodically, while the sudden switch to a more layered, melodic attack toward the end of the song is an unexpected, but welcome, injection of change, allowing the listener a moment to breathe before the final barrage of thundering drums and twisted, angular guitars.

“Sorrow’s Score” opens with a more overtly melodic riff, the caustic vocals treading a line between Akerfeldt and Wiwczarek. Again the group show off the strength of their writing skills, developing intelligent, interweaving patterns of lead and rhythm guitars, without neglecting the important contributions of bass-led counter-riffs. The terrific solo in the middle of the song manages to tease melody out of dizzying technicality, while the grand, chant-along chorus gives the song a killer hook.

There’s a hint of Gothenburg melody to “Grim Awakenings”, albeit slower and with a good deal more deathly heft. It’s obvious the band are accomplished song-writers, dealing here in a complexity born not of flashy technicality and sudden tempo changes, but one of interesting, fluid structuring and the clever exploration of central ideas. Not unakin to the slower moments of recent Job For A Cowboy, this is a song utterly focussed on spreading the gospel of death metal, its titanic vocals preaching fire and brimstone while the guitars and drums lock perfectly into step, marching relentlessly toward the conclusion. 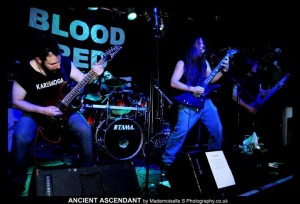 The word “progressive” has been thrown at this album by quite a few people, and not entirely inaccurately – at least in parts. While the majority of the record is a steroid-fuelled, glass-chewing death metal tour de force, there are flashes of progressive nuance to be found here and there. Case in point, “Lost Rage In The Dying Light” possesses a handful of vital riffs that push the death metal envelope with their twisted scales and subtle melodies, while structurally it shifts and transforms in unusual, yet compelling ways, particularly toward its spiralling chorus refrain. Most impressively, it takes a mid-song detour into more obviously prog-influenced waters, a dynamic shift into bleak, acoustic ambience, that still retains the track’s core identity and themes.

By way of contrast, “Ravenous Undead Of The Dead” gets off with a fully Vader-esque growl of ‘Undead!’, and simply flies from there on, blasting and bludgeoning away. Managing to shake the Polish aesthetic a bit, it slips into some needling, technically adept riff-work  and stomping grooves before unleashing an unexpected bit of Pantera-worship on the listener.  Though the track blasts back into full-throated, devastating death metal form soon enough, the chunky, gut-level Pantera groove reappears at the tail-end of the track to set the stage for a call-and-response display of rumbling bass distortion and teeth-rattling solo work.

The bulldozing kick-drums and guttural vocals that introduce “Forced Insight” signal another pulverising display of prime-cut riffage and dominant, bone-crushing drums. The vocals switch between a chest-booming Akerfeldt-ian growl and a sparingly used howl of discontent, while a clever stop-start dynamic jerks rhythmically between sharp stabs of lead guitar and grumbling, grinding bass.  Relatively simple and direct, the track manages to take on board flashes of electric, technical playing and snatches of eerie lead guitar melody, without ever veering from its course,

The finale of “Titan” pulls everything together – the Polish bludgeon, the Swedish growl, the Gothenburg melody – into one final bruiser of a song. No single element outweighs the others, cutting and sawing with a host of thrashy, black-toothed riffs, sharpened by touches of steely melody and powered by a diesel-snorting engine of drumming force. Again, there are snatches of progressive intent here and there, in the way the band twist and turn a riff just so – but ultimately the track is a culmination of the band doing what they do best, and that’s deliver adrenalized, blood-pumping death metal, light on cliché and disregarding of trends. 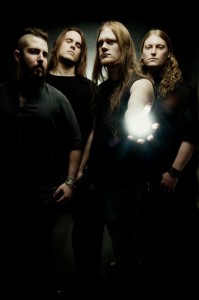 This album offers up an impressive beating for listeners, that’s for sure, and possesses a variety of methods to inflict that pain upon them. The quartet have crafted a mammoth behemoth of sound and fury with a clearly developed sense of identity and direction. The only thing that is lacking is a real killer blow, a key song (or songs) that would be utterly definitive and unlock the last remaining potential of the group.

As it is, this is an album where no single song stands out as a defining anthem, but equally none show any weaknesses to be exploited by their enemies. The group have a knack for writing dense, heavy songs that pack in an array of spiked hooks and memorable, often irresistible riffage, backed up by catchy, hypnotic growled vocals and a pulverising drumming  display. There’s a foundation here for a long and storied career, and all the signs point to a band for whom the only direction is up.

Fans of the aforementioned Vader, Bloodbath (particularly their more recent, less self-consciously old-school material), and even Testament should give this album several spins, as they are bound to find something to put a bloody grin on their bruised and battered faces!

EDITOR’S NOTE: The Grim Awakening was released by Siege of Amida in 2011 and is available from the band’s web store here. It can also be downloaded from Amazon mp3 and iTunes.

It appears that Ancient Ascendant have also recorded a four-track EP called Into the Dark (with Dan Swanö handling the post-production work) for release later this summer. Here’s the cover art for that: 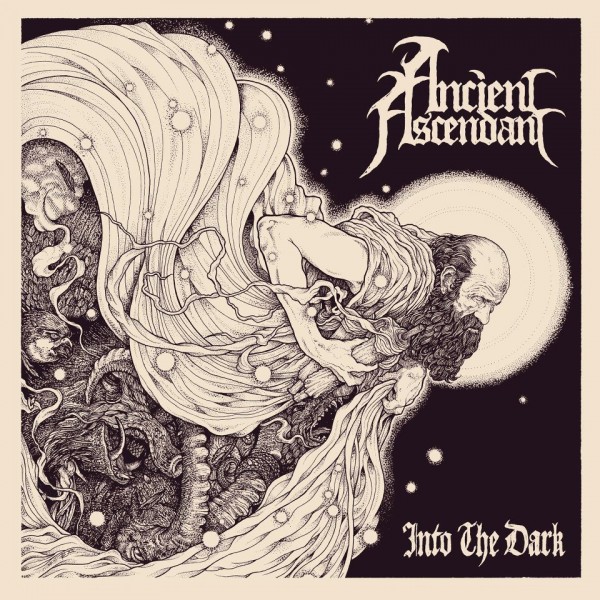 And now here is The Grim Awakening’s final track: