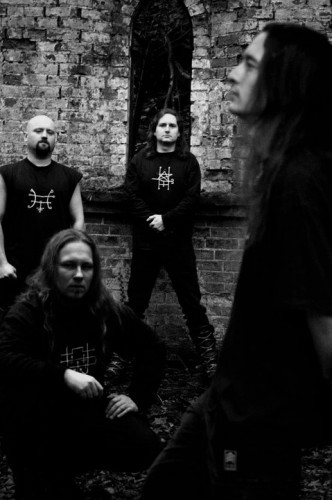 (Andy Synn finishes his unofficial UK week of reviews with this latest installment of THE SYNN REPORT, focusing on the UK’s Thus Defiled.)

Black as night, black as pitch, blacker than the foulest witch… That truly sums up the ethos of Thus Defiled, an arcane amalgamation of death metal filth and black metal fury.

Formed back in 1992 and with four albums to their name – the most recent of which was released back in 2007 – the group have been largely inactive in recent years, which is a shame, as the world needs more of the musical magick that is unleashed when the members of Thus Defiled come together.

From their beginnings as a raw, death-influenced black metal act, with a slightly lo-fi, but still pretty clear sound, they evolved over time – as all things must – into a darker, more occult proposition, ditching the corpse-paint and gaining some solid thrash and death metal influences in the process. They incorporated these influences into a framework of archly heretical black metal without losing their carefully crafted sense of identity, mastering their art and forcing sound to serve their purpose, rather than to define it. 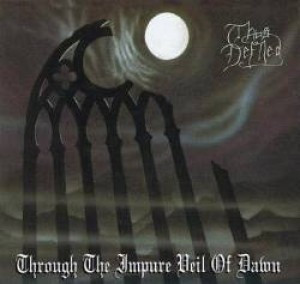 A quick build of ambience introduces the blasting, bone-rattling drums and scathing guitars of “Wings of Fallen Majesty”, kicking the album off in fine style. As an indicator of things to come it’s nigh perfect, matching blazing speed with moments of filthy, mid-tempo crawl, while the vocals grunt and vomit guttural imprecations.

The stupendously titled “A Crimson Vision In The Glade of Shadowfire” brings a coffin-load of melody to the proceedings, enhancing its nimble riffage and storming drumming performance. The seething tremolo melodies burst with demonic vigour, while the well-written keyboards add a layer of shadow to the track, and serve as a segue into the haunting, bass-led interlude of “Prelude to Midnight”, which itself transitions seamlessly into the heads-down riffage of “Under Blackening Horizons”.

The latter song builds layers of punishing thrash riffs into something epic and immortal, the vocals only appearing several minutes into the track following a beautiful section of acoustic ambience. This track certainly has a touch of diabolical mysticism to it, its rumbling and esoteric power built upon a framework of classic metal influences.

“Dreaming Beyond Dawnless Realms” begins with a poetic piece of gothic melodrama drawn straight from the Rotting Christ playbook, but soon develops into a rippling display of sinewy black metal tremolo and doom-laden death metal vocals. Throughout the track the unrelenting bass and guitars lock in to a tightly-welded rhythm, while winding lead guitars torment the ear with bleak melodies.

The horrifying death vocals and megaton blasting of warped pseudo-thrash riffage of “Dominus Luciferi” lead into the hypnotically melodic “Fear Us For We Are The Darkness”, before the album culminates in the grandiose, unrepentant strains of spiralling tremolo melody and chiming keys that make up closer “Darkness Rape The Tranquil Shore of Eternity”, ending the album in majestic fashion with its brooding restraint and ringing guitar leads.

This is/was a stunning debut for the band, showing their ear not just for black metal’s histrionic aggression, but also for classic metal’s ageless power to captivate and uplift the listener.

Recommended song: “Fear Us, For We Are The Darkness” 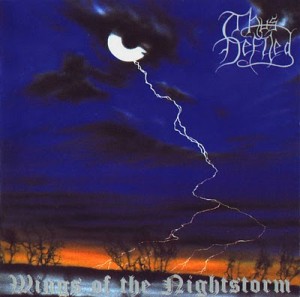 Building from the creative success of their debut, the second album begins with the keyboard-heavy introduction of “To Yearn That Which Again Shall Be”, leading straight into the immolating fire of “Rapture of Twilight Burning”, a song which immediately demonstrates a fresher, clearer sound than their debut, with sharper-edged vocals and a tighter, more forceful drum sound.

Harsher, yet less guttural, snarls and growls cut through the mix, while the guitars slash and burn over a foundation of snappy thrash beats and jack-hammer blasting. The drums definitely have a taste of Proscriptor McGovern about them, while the wailing solo shamelessly channels the spirit of Hanneman and King.

“(Angelblood) The Tears of An Age Now Dead” has something of a more gothic sheen to it, velveteen melodies delivered over a fiery core of raging, thrash-inflected black metal. Melding harmony and savagery, it’s a thunderous affair that switches back and forth between brutal aggression and imperial majesty, the relentless pummel of the kick drums offsetting the winding tremolo melodies of the guitars.

The slow-burning “Through Eyes of Fire” exposes a more elaborate vision of blackened ire and doomy melancholy, a funeral march of the heaving riffage paving the way for the track’s sparkling obsidian melodies and sinuous, weaving bass. The track dynamically switches pace a few minutes in, letting loose with a barrage of frenetic tremolo work and punchy, strike-and-blast drums, behind which an evocative keyboard melody weaves its black magic.

The full-on black metal assault of “Winter’s Dawn (Crowns My Empire)” douses the listener in a hailstorm of frozen, caustic venom. With a cocksure, belligerent swagger, the track drops into a sequence of propulsive, head-banging mid-paced riffs and tyrannical vocals, eventually culminating in a cleverly entwined series of lead guitars, stabbing keyboards and blitzkrieg drumming.

Astral and arcane, the spectral melody lines of “Empire of Souls Bleeding” stand as tribute to the band’s artistic merit. A mesmerising display of satanic force and hypnotic seduction, the murky, swirling leads mix in with gloomy keyboards to create a claustrophobic atmosphere around the harsh, croaking vocals and skittering, spattering drums.

Fleeting phantom harmonies haunt the grey and barren lands of “The Final Fall of The Light”, swept clean by fire and blood. At a hair over ten minutes in length, it still wastes no time in diving into a torrent of twisted guitars and skinwalking blast beats, over which flurries of lead guitar dance demonically and a haze of bleak keyboards cast a gothic pall.

Recommended song: “Through Eyes of Fire” 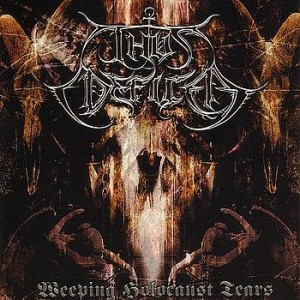 The reborn and revitalised Thus Defiled returned in 2003 with their third full-length, with a renewed focus and a massive wall of sound behind them.

The burning rain of “Spiritual Abduction” follows, unleashing the awesome power of the group’s cataclysmically empowered guitars in a whirlwind of demonic wrath. Everything has more power here, from the finger-shredding tremolo work to the nuclear-powered drums, to the spiteful and skin-peeling vocals, howling in soulless anguish.

A stalking, predatory aura surrounds “Of Shadow And Storm”, part inchoate darkness and part animalistic savagery. Prominent bass-led counter-melodies wheel and whisper around the spiralling guitars, drifting apart, then slamming back together in an explosion of devilish power. The vocals are an agonised, bestial snarl, and the drums a whirling dervish of destruction, while the massive, head-spinning guitar solo that closes out the track is a stunning revelation.

Guitars hack and hammer, spilling blood and shattering bone as “When Seduction Brings Forth Damnation” unleashes its pent up fury on the listener. A berserker storm of of screaming vocals and neck-snapping drums it pulls no punches and takes no prisoners, ripping and tearing with every trap-jawed riff and screeching, dive-bombing solo.

The towering tour de force of “The Angelblood Chronicles” is a 17 minute odyssey of wounded pride and sinful arrogance, wrapped up in a cocoon of purest hate. Beginning with a decadent display of cold melody and illuminating harmony, it soon descends into contortions of whiplash guitars and hellfire drumming, spiralling uncontrollably into the abyss.

Vocals erupt in a blistered tongue of fire and a series of searing solos whip up a storm of blazing intensity, as thunderous drums and crushing riffs interject themselves between long passages of sandblasting tremolo, creating a punishing aurora of pain

Unexpectedly the song transforms into a dark and foreboding piece of ambient, haunting noise, lasting several minutes, a last reprieve before the crippling noose of gnashing tremolo guitars and molten, incandescent solo work begins to tighten once more.

The finale of “Fire Serpent Dawn” is charged with brimstone riffage and static, hair-raising howls of horror. Barbed hooks of subtle, creeping melody worm their way under the skin as a dizzying display of drumming prowess hammers away with a vengeance. Brutal gutturals meld in with the banshee shrieks, adding to the demonic atmosphere of the track, while a mid-song break into a King Diamond-esque lead refrain showcases the versatility and virtuosity of the band, climaxing in a stunning display of galloping metal madness and scorching black fire.

Recommended song: “Of Shadow and Storm”

[audio:https://www.nocleansinging.com/wp-content/uploads/2012/07/03-Of-Shadow-And-Storm.mp3|titles=Thus Defiled – Of Shadow And Storm] 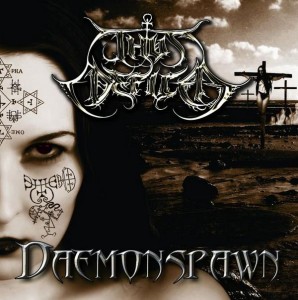 Arguably the magnum opus of the band, their fourth album saw them fully envelop the extensive thrash influences that had always dwelled on the periphery of their sound, swallowing them whole to bring a maniacal, almost mechanical precision and chaotic energy to the record.

“…And They Shall Fear The Night” is all misanthropic glee and the stomping riffage, and the explosive drums sound absolutely massive, brooding and powerful like a coiled leviathan of pure muscle. Patient harmony mixes with growling ferocity, cutting and mutilating with calculated intent, yet the band never neglect the shadowy mood of the song, black clouds pierced by soaring, ritualistic lead guitars as the finale of the song sees it transform it into a heretical anthem of satanic might.

There’s a clear dichotomy between concise and callous delivery of the shorter songs and the lengthier, more ambitious arrangements of the others. The creepy and threatening atmosphere the band build on longer compositions such as “…And They Shall Fear The Night” is a testament to their skill and style, while the shorter, more vicious cuts like “Blackreign (Crown of Horns)” provide a showcase for pure and limitless aggression.

“Blackreign…” is a veritable onslaught of sheer, unmitigated aggression, replete with some seriously barbed riffage and some mind-bending solo work, and its follow-up “Daemonwielder” is just as unforgiving,  a burning engine of pure hate, powered by terrifying, almost inhuman blast-beats and a sleek and seprentine bass-line.

“Beyond The Seventh Circle of Fire” is a boiling cauldron of pitch-black agony, raging thrash-injected riffage transformed by mutant blast-beats into a creation of pure malice and destruction. For 6 minutes it blasts and brutalises the listener with sickening riff after sickening riff, before it reaches an ending of sweetly seductive lead guitars and titanic, crashing guitar chords.

Utterly undeniable, “Dreamraper” mixes cast-iron riffage with dissonant tremolo work. The paint-stripping vocals reek of the crypt and of decay, but the drums pound away like some monstrous, warmachine, brought to unholy life. For a song with such a noxious and fetid atmosphere it possesses an utterly infectious chorus and a spectacular, maddening solo, leading to bludgeoning final riff attack.

Malevolent and chaotic, “Astaroth (The Art of Balance in Darkness)” comes on like an insane, evil version of Iron Maiden, corrupted by years of alcohol abuse and death metal devotion. Admirably deranged, it melds galloping riffage, scything tremolo and sickening chugging together into something utterly sinister.

The album finishes with a hell-tormented take on Slayer’s “Black Magic”, upping the ante on the original with the introduction of frenzied blast-beats and a lethal, cancerous guitar tone.

Recommended song: “…And They Shall Fear The Night”

[audio:https://www.nocleansinging.com/wp-content/uploads/2012/07/02-…And-They-Shall-Fear-the-Night-Explicit.mp3|titles=Thus Defiled – …And They Shall Fear the Night [Explicit]