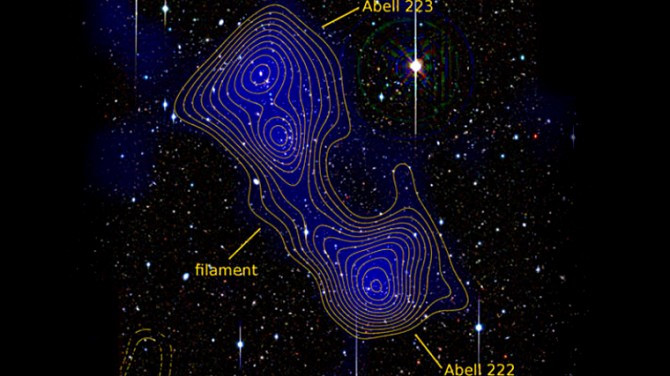 Nope, this isn’t about a Gojira song, despite the confusingly similar title of this post. It’s part of our continuing effort to transform ourselves into The Blog of Particle Physics, Cosmology, and Extreme Metal. It’s also about an occurrence that’s so profoundly mind-blowing on so many levels that it could not be ignored: the first observation of Dark Matter — the material that’s theorized to make up 96% of all matter in the universe and that provides the “scaffolding” of the cosmos.

To appreciate the full explosive weirdness of this event requires a bit of back story.

On July 4, 2012, humankind reached a milestone not only in the history of science but also in our understanding of all nature. As we reported in this post, that was the day when the European Organization for Nuclear Research (CERN) announced the discovery (at a 99.999% confidence level) of the Higgs boson (a/k/a the “God particle”), a subatomic particle that’s responsible for giving mass to electrons, protons, and neutrons — the fundamental components of all visible matter in the universe.

The existence of the Higgs boson had been predicted by the Standard Model of particle physics in its finalized form since the 1970s, but the boson’s existence had never before been proven and verified. The Standard Model is a theory (though not quite so theoretical any more) about the interaction of three of the four basic forces known in the universe — the forces that describe the interaction of those particles described above. The one fundamental force omitted from the Standard Models’ unification is gravitation, a force described in the general theory of relativity.

I ended that earlier post with a quote from CERN’s press release about the discovery of the Higgs boson — a quote which emphasized that the Standard Model only explains the interaction among the particles that make up all the matter that we can see — and that we can’t see 96% of the matter (or more precisely, “mass-energy”) that makes up the universe; that remaining 96% is the stuff called Dark Matter and Dark Energy.

Most experts in this field believe that stuff mainly consists of undiscovered types of particles that are different from those that make up all the matter we’re able to observe. We can’t see it because it apparently doesn’t emit or absorb light or any other electromagnetic radiation at any significant level. But if we can’t see it, how do we know it’s there?

Like the Higgs boson, it’s yet another example of something that scientists have hypothesized must exist, despite the fact that its existence had never been directly observed. Its existence has been inferred since the early 1930s because of its gravitational effect on giant structures in the universe that we can see — things like galaxies and clusters of galaxies.

Dark Matter and Dark Energy pop up as the hypothetical explanation for all sorts of otherwise inexplicable phenomena. For example, scientists have developed means of estimating the total mass in various galaxies, and indeed in the universe itself. But the calculated mass is dramatically greater (by roughly a factor of 10) than the mass that can be associated with stars, gas, and dust — the stuff that can be seen. Something must make up the mass we can’t see, but what is it?

To take another example, since the 1990s, astronomical observations have shown that not only is the universe expanding (and has been expanding since the Big Bang), but that it’s expanding at an accelerating rate. In other words, the expansion is speeding up, not slowing down or remaining constant. What’s generating that gravitationally repulsive effect that is driving the observable components of the universe outward?

Here’s one more example. As predicted by Einstein’s general theory of relativity, light from a distant source can be bent by the gravitational effect of massive bodies in between that distant source and an observer. This is called “gravitational lensing”, and it can result in the magnification or distortion of the distant background source of light as it’s observed from Earth. By measuring the distortion, astronomers can estimate the mass of whatever is in between the distant light source and the observer — the mass of the thing that’s curving spacetime and causing light to bend.

In some observed instances, the light from distant clusters of galaxies is being bent by something extraordinarily massive that can’t be seen. What is it that’s causing the light to bend? 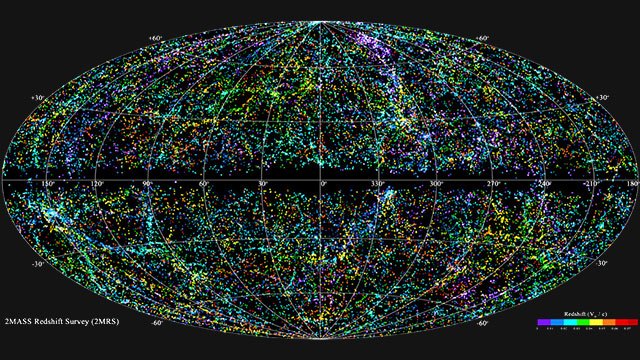 And here’s one final example: Astronomers have created 3-D maps of the observable universe, showing the distribution of galaxies. It turns out that galaxies are not randomly distributed within the universe. Instead, galaxies and super-clusters of galaxies are distributed in a branched structure, appearing at what appear to be the intersections of unseen filaments or threads, as if they formed on the framework of some cosmic scaffolding. What is it that’s providing this observed structure to the galactic objects in the universe?

In each of these examples, the hypothesized answer is the same: a combination of Dark Matter and Dark Energy.

Now, all of this is pretty mind-blowing to me, but it’s all just background to the real eye-popping shit, which comes next:

A team of astronomers led by Jörg Dietrich at the University of Munich Observatory in Germany have reported the first direct observation of Dark Matter. And they reported this in an article that appeared in a scientific journal called Nature on . . . wait for it . . . July 4, 2012! That’s right — on the same fucking day as the announcement of the discovery of a Higgs boson. In fact, Dietrich’s announcement was somewhat overshadowed by the CERN announcement about the Higgs bosun because both happened on the same day.

Using data from the XMM-Newton spacecraft and the Subaru telescope on Mauna Kea in Hawaii, processed with a new computer analysis technique, Dietrich and his team were able to observe a filament of dark matter connecting two clusters of galaxies — known as Abell 222 and Abell 223. They were able to observe it in part because the filament is so enormous — 18 megaparsecs long.

Another factor that enabled the Dietrich team to observe the Dark Matter filament connecting Abell 222 and Abell 223 is described in this quote from one article I read:

“The team was able to observe the dark matter not only because of the vast size of the filament, but because of its orientation: it is perpendicular to Earth, along our line of view. That made it more dense from our perspective, increasing the gravitational lensing that deforms the light of objects behind it. By observing this optical distortion over 40,000 background galaxies, they know that the mass in the filament is between 6.5 × 10^13 and 9.8 × 10^13 times the mass of the Sun.”

So, there you have it: the first direct observation of the previously unseen matter that appears to give structure and shape to the universe, and that makes up the vast majority of all the mass in the universe.

We still don’t know what Dark Matter is made of, but scientists are working on that problem, too.

I guess it goes without saying, but I’m saying it anyway: This isn’t music, but it’s definitely metal.

Thanks to NCS reader Gemma  for tipping me to the Dietrich team’s announcement. Here are the sources I used in writing this post:

32 Responses to “THE HEAVIEST MATTER IN THE UNIVERSE”