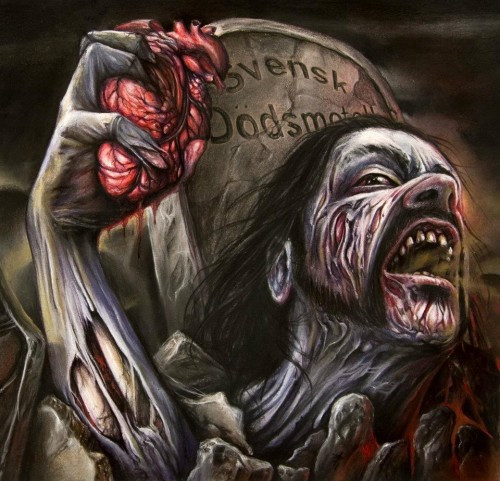 On their second album, The Key To A Black Heart, Blood Mortized take a monstrous step forward, turning out by far their finest work yet and creating one of the best old-school death metal albums of 2012. By old-school, I’m referring to that distinctive old Swedish school, where rotting flesh sloughs off the faces of the taloned teachers and the curriculum concentrates on raising the dead and feeding them from the flesh of the living — but with a heavy course load in the lessons of bands like …For Victory-era Bolt Thrower and early Celtic Frost.

To succeed in creating this kind of music with the incontestable ring of authenticity requires faithfulness to the core elements of the sound, and Blood Mortized are definitely true believers. They’re also highly skilled practitioners in the dark arts of breathing ghoulish life into the festering meat of the departed. They know what body parts this music is made of, and they know how to reanimate the patchwork corpses and give them grisly new life.

But that alone wouldn’t earn them an A. What elevates this album above many other new offerings in the genre is superior songwriting and genuine flair in the performances at all positions.

A listing of the common denominators of the songs — those core elements of the sound — must begin with a truly massive “wall of guitar” approach to the riffing. Brutally down-tuned and distorted, the guitars grind and spin like giant buzzsaws pulverizing their way through dense concrete, or they chug like some titanic black train straight out of hell, belching dense, oily smoke. The bass tone is equally tank-heavy, more felt than heard as it sets up a vibration deep in your guts. 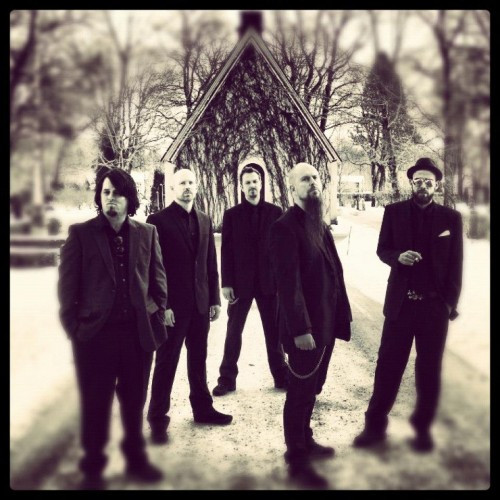 The album’s production relied on live takes and an emphasis on organic “straight to tape” kind of sound, and the result is that the drums have a muffled quality, though they’re a vital and integral presence throughout. They range from bouts of crust-punk style two-beat to full-on blasting, from death ‘n’ roll rhythms to John Bonham-style booming on “Burn and Die”.

And the vocals — holy hell, are they nasty. Mattias Parkkila’s hoarse, mid-range bellowing, howling, roaring, and occasional shrieking broadcast a message that proclaims, “Don’t fuck with me, I hold your souls in my hands.”  Reminiscent at times of both Martin van Drunen and Karl Willets, they’re as ghoulish and vicious as they should be.

All of these components working in harness together would be enough to satisfy the rigid tastes of old-school death metal aficionados, but there’s way more to what Blood Mortized achieve on this album. Every song, for example, includes attention-grabbing guitar solo’s that don’t feel tacked-on. They squall, they incinerate, they spread the fever of disease, and they even inject songs such as “Reqviem” and “Burn and Die” with a classic heavy-metal feel. (Two of the solo’s, on “Unleashing the Hounds” and “Doomsday Architect”, are delivered by guest guitarist Rick Rozz, one of the founding members of both Mantas/Death and Massacre.)

The real trick in creating authentic old-school death metal is to keep faith with the fundamentals of the genre without causing all the songs to come off sounding basically the same. Blood Mortized pull off that trick in both small and large ways. They do a nice job varying the tempo, delivering both hard-charging grinders like “The Heretic Possession”, “To Murder A God”, and “Shadow of the Quarter Sun” (an accelerated version of a song that appeared on their previous EP, Bestial, which is bound to be a sure-fire mosh-pit trigger and which appears as a bonus track on the CD, cassette, and download versions of the album), as well as the stomping, groaning, death-doom standout that is “Bringer of Eternal Death”.

Even within the more prevalent mid-paced numbers, the band deliver crushing break downs that generate the feel of being dragged by the ankles through a trough of congealed blood and splintered bone, and they have a clear knack, especially in the more up-tempo songs, for writing some big, booming grooves into the music.

And then there are “Burn and Die” and the title track, “The Key To A Black Heart”. The former, which appears as a bonus only on the vinyl and cassette versions of the album, is built around rock beats; it includes a combo of heavy metal riffing and guitar harmonies that are as catchy as ebola; and you even get gang vocals. It’s definitely a candidate for our year-end “Most Infectious Songs” list. And the latter, which is a beautiful way to end this album, has an epic, near Viking-metal feel to the melodies — certainly the most melodic track on an album whose melodies are generally minimalist. 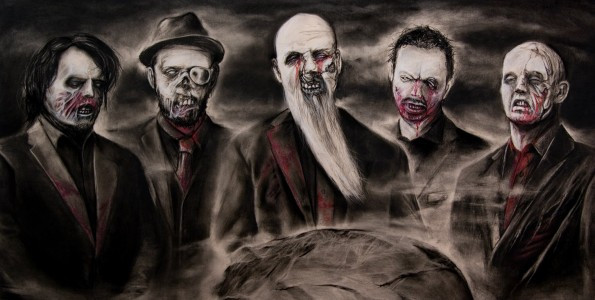 But the small touches are almost as important in making the songs distinctive: the injection of some Motorhead-style filthiness in “Doomsday Architect”, a song that eats up the pavement like a fat demon chopper spewing thick clouds of pungent exhaust; the ghostly weeping and wailing in the background of “Rekviem” and the very cool combo of percussion and Gregorian choral chanting in the outro of the same song; and the sweet little mix of solo guitar and heart-beat drumming that appears briefly in the title track.

Put all of this together, and you get an album that really has no weak spots. All the songs are worth hearing and re-hearing — you’ll definitely get your money’s worth from The Key To A Black Heart.

To give you a taste of what I’ve been trying to describe, here’s an assortment of songs from the album:

Mattias Parkkila (vocals): Previously a member of bands such as Stigmata, E.G.Y.P.T., and Excretion. Session vocals for Excruciate. Current side projects are Birch Mountain and Malfeitor.

Anders Biazzi (guitar): Formerly a member of early death metal bands such as Patholog and Scum. Played with Amon Amarth between 1991 and 1998 and performed on the band’s demos and the first two official releases.

Mattias Borgh (drums): A member of early old school bands such as Embryo and the newly resurrected Crypt of Kerberos. He is also was the drummer for Arcana.

The Key To A Black Heart was released on CD by FDA Rekotz in May, it’s available for download from iTunes and Amazon mp3 now, and Chaos Records will be releasing LP and cassette versions of the album later this month. That vinyl edition will be sporting a different painted cover by Dutch artist Thomas Kynst, who also did the cover art for the CD release that you can see at the top of this review. Here’s the vinyl cover: 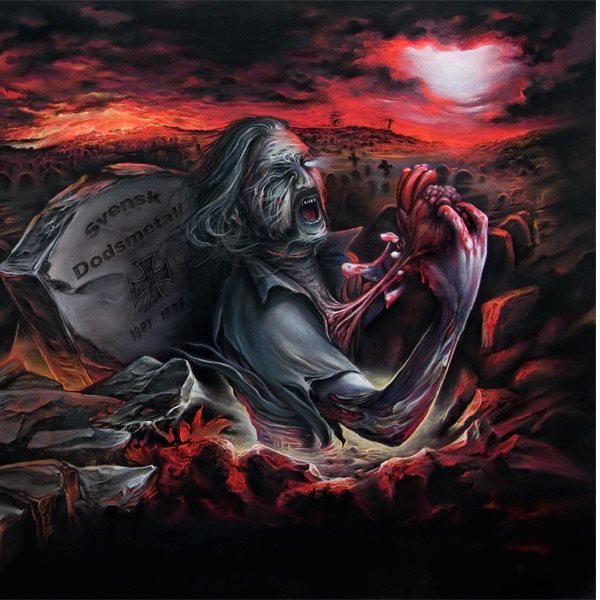 You can find Blood Mortized on Facebook here, and they have a web site at this location.

9 Responses to “BLOOD MORTIZED: “THE KEY TO A BLACK HEART””