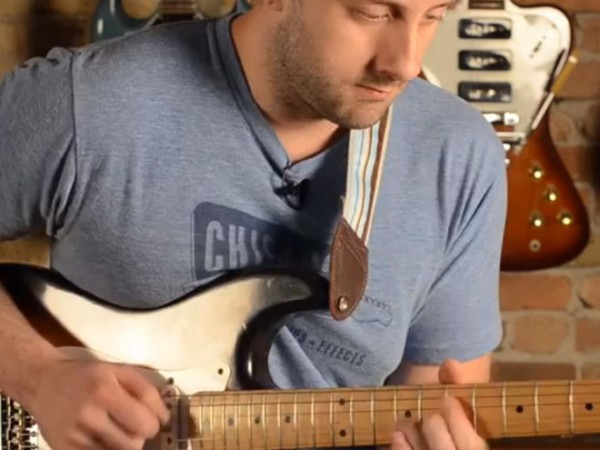 Alex Chadwick has got some mad skillz. He’s a guitarist who made a video for something called the Chicago Music Exchange, and in the video he plays 100 famous guitar riffs, one after the other, straight through in one take. They’re arranged in chronological order, so you get something like a 12-minute history of rock ‘n roll. And he does it really fuckin’ well, changing the tuning on the fly and even quickly playing some bottleneck guitar when the riffs call for it. Since the video went up on YouTube in early June, it’s been watched by more than 2.8 million people . . . and counting.

The songs from which he selected the riffs are almost entirely rock songs, though you’ll see some metal in there, too.  What would really be cool would be to see someone as good as Chadwick do a video like this composed entirely of metal riffs — straight through, in one take.

By the way, in the video, Chadwick is playing a 1958 Fender Stratocaster Three-Tone Sunburst that the Chicago Music Exchange is selling for a cool $33,000.

To see the full detailed list of all the artists, keys, and year of each song played in the video, plus a more detailed breakdown of the gear Chadwick uses, go HERE.