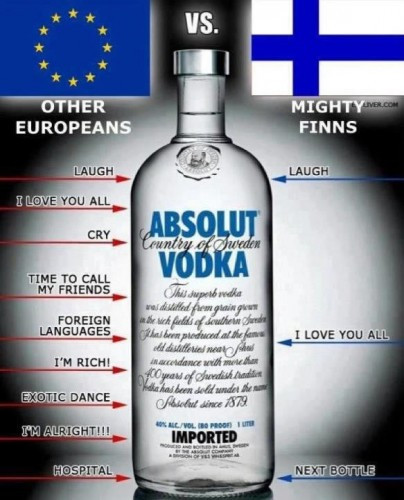 Happy Fucking Monday to one and all. Yes, it’s time for another edition of “THAT’S METAL!”, in which we collect pics, videos, and news items that we think are metal, even though they’re not music. We have a fuckload of items for this installment, so I’m gonna cut short the normal long-winded intro and get right to it.

Look, I know that other Europeans are just as capable as the Finns of ingesting mass quantities of hooch without losing their shit, so don’t scorch my ass in the comments, please. I just thought that pic up there was funnier than an echidna’s penis. Also, I have this pic of what happens to Finns when they die, displaying the natural embalming effects of a lifetime of “next bottle, please”. The Finn is on the left. Or the right. 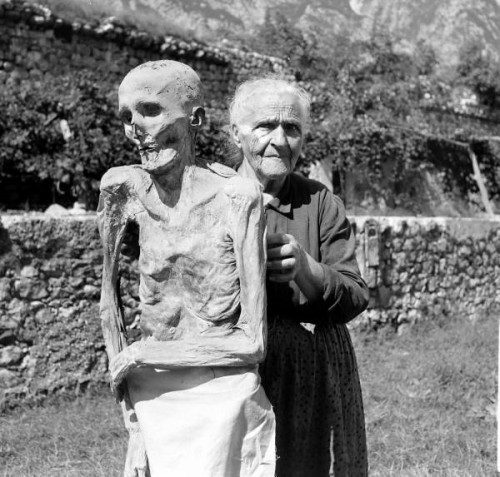 Some readers will probably be disgusted at seeing such a juvenile form of humor as this next photo on a really sophisticated web site like NO CLEAN SINGING. Those people are obviously new visitors. And they haven’t laid eyes on the NCS FUCKING GOOD PANCAKE TOUR shirt. 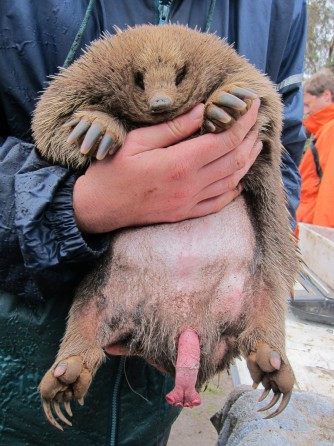 Yes, that’s a penis. But it’s a penis with four action nozzles instead of one, so that makes this all about science instead of beer-pong bro humor. And seriously, how can a four-headed penis not be metal?

The echidna, of course, is native to Australia, the country where every animal looks like it’s been stitched together from the leftover body parts of other animals (stole that line, as well as the photo, from this place).

As explained in this helpful National Geographic feature, an echidna is a termite-eating hedgehog that’s been around since the age of dinosaurs. It’s a mammal but it lays eggs like a reptile. And in case you think the male is the only member of the species with a little something extra in the Department of Love, the females have two love canals. It’s theorized that the male pumps one of them with two heads and the other with the remaining two. The mind boggles, but no one really knows for sure why either the females or the males evolved this way.

But who cares? MASSIVE WALL OF ECHIDNA!

Speaking of Australia, I have this instructional video about how to catch a kangaroo.

Okay, that was like the video version of a shaggy dog story. Still metal though, even if I can’t explain why. (via The Presurfer)

Fuck, I can’t get that pic of the echidna penis out of my head. It’s one of those things that once seen can’t be unseen. So, let’s just stay a little bit longer with freaks of nature. And male junk.

This next pic is of a fish called the pacu. The pacu is native to the Amazon, but they’ve recently been found swimming in a lake in Illinois (probably the result of someone dumping their aquarium pets into the water). It has teeth that look human. Ugly fucker, isn’t it? 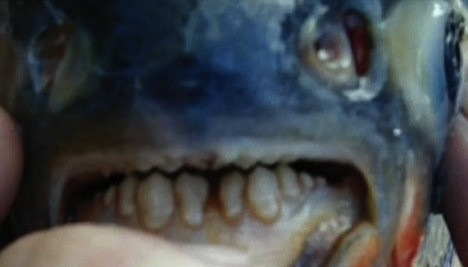 A certain kind of fish has been spotted in a lake in Illinois, and it will probably keep men out of the water.

The fish, called pacu, has human-like teeth and there have been reports that they attack human testicles. In 2011, two men in New Guinea, reportedly died from blood loss after their testicles were attacked by pacu.

A fisherman caught a pacu in Lake Lou Yeager in the downstate Illinois city of Litchfield in early June. It was sent to the Illinois Department of Natural Resources for testing, which determined the fish was a pacu.

The pacu is native to the Amazon and can grow up to 3 feet long and weigh 50 pounds. It has powerful jaws and teeth, very similar to a human. It eats snails, nuts and aquatic vegetation.

I think we need a palette cleanser after the echidna and the pacu. This ought to do the job. This is Bub: 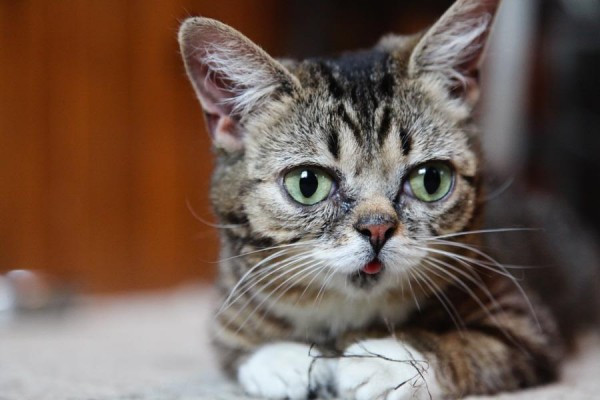 Bub is a “perma-kitten”, the result of a rare genetic disorder. She will stay kitten-sized her entire life. She has an elongated body and short, stubby legs. Her lower jaw is shorter than her upper jaw, and her teeth never grew in, which is why her tongue is usually hanging out. She makes a variety of very endearing noises.

Sometimes, when everything goes wrong, the result is something right. If these short clips don’t give you a big smile, you’re definitely wound too tight:

Bub has her own Facebook page here, and her tattooed owner has posted more videos that you can find via this link, should you require additional palette cleansing. You might say that this is too cute to be metal, but I think all cats are metal, so there.

Since I’m now feeling all gooey and heart-warmed, I’m goin’ next to Bikers Against Child Abuse International. This is an organization of bikers who use their long-haired, tattooed, heavy-booted, intimidating looks to empower children who have been victims of child abuse.

This story tells about an 11-year-old girl who is one of the beneficiaries of Arizona’s BACA chapter. According to police reports, she was victimized by a relative — someone she should have been able to trust. To pick up with the news feature: 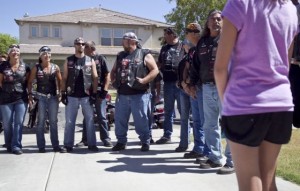 He’s not in the state any longer, but the criminal case is progressing slowly, so he’s not in jail, either.

He still terrorizes her at night, even though he’s nowhere near. She wakes, heart pounding. The nightmare feels real again. She never feels safe, even with her parents just downstairs.

If the man who hurt this little girl calls or drives by, or even if she is just scared, another nightmare, the bikers will ride over and stand guard all night.

If she is afraid to go to school, they will take her and watch until she’s safely inside.

And if she has to testify against her abuser in court, they will go, too, walking with her to the witness stand and taking over the first row of seats. Pipes [one of BACA’s members] will tell her, “Look at us, not him.” And when she’s done, they will circle her again and walk her out.

The whole story is a pretty emotional read. The whole concept is definitely metal. (Thanks to Phro for linking me to this piece.)

The next item is a piece of video mind-fuckery. The performer is a Dutch illusionist named Hans Klok. Any one of the illusions you’ll see in this video would be pretty awesome standing alone, but the fact that he does a whole fuckload of them one after another at high speed makes for a serious head explosion.

Flash mob videos have proliferated like the spawn of rabbits on Viagra. I included one I especially liked, from Moscow, in a previous edition of this feature. Recently, I found another one that I thought was damned cool. I guess, like the last one, it’s a bit of a cheat because it does involve music. Not metal music, of course, but Beethoven. Who was metal . . . as is this video.

Yeah, it was funded by a bank, but it’s still cool. It takes place in Sabadell in Catalonia, Spain. It involves people from the Vallès Symphony Orchestra, and the Lieder, Amics de l’Òpera, and Coral Belles Arts choirs. This was beautifully filmed in May 2012 and is worth taking to full screen.

I have a lot more THAT’S METAL! shit collected, but I think I better bring this installment to a close and save the rest for another installment. I have Phro to thank for this last clip, too. The comedian is Jamie Kilstein. He’s like a latter-day Bill Hicks. He rants, he raves, he hits nails on the heads, like he does in this piece about the bullshit that makes up much of “popular” music. I don’t know if he’s a metalhead, but he should be.