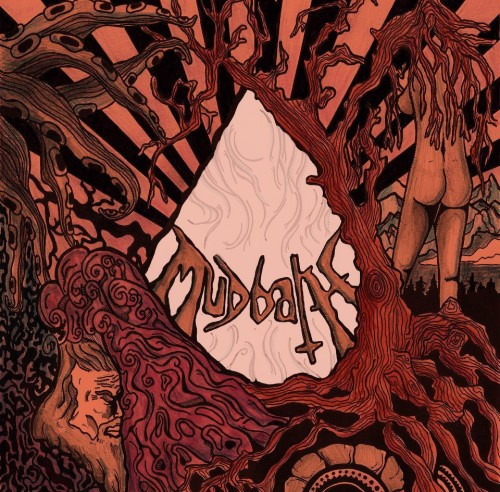 “Loserwood” hooked me in the first 30 seconds with a disease-ridden lead guitar riff and a brutal bass line, both of which have the distortion dialed to the point that they’ll jar fillings loose in your teeth. A dual-tracked, downtuned guitar solo dumps a heaping bucket of filth all over the proceedings, and the song also includes a screaming psychedelic solo. To top it off, Mudbath’s vocalist sounds like Eyehategod’s Mike Williams, which is to say that the skrieks are enough to wake the dead.

Getting comfortable with the music isn’t an option, and I’m sure that’s not Mudbath’s goal either. But the fat, dissonant riffs in “Mudjahideen” are pretty infectious nonetheless. Yet the lumbering stomp of the music is still bereft of hope or light, and this time the burning-lung vocals are joined by a braying yell, though it sounds no more sane. The last third of the song briefly shifts into a higher gear as the guitars skitter about crazily, but that’s just a prelude to another warbling solo that’s awful damned sweet (and awful damned ill).

Red Desert Orgy only includes three songs, and the last one claims the memorable title of “Smells Like Teen Cunt”. It really has nothing to do with the Nirvana song, and the only smell it gives off is the stench of Cthulhu in the last stages of leprosy. Oppresively bleak and weighted with metallic fuzz, it groans and crawls and howls, with more of those bluesy/ballsy guitar solos and nuthouse vocals. The music is thoroughly oppressive and radiates waves of fevered illness, all the way down to the crawling end when the patient flatlines in a last awful gasp. Not a pretty way to go.

But none of this is pretty. I’m not sure I could survive a full album of this material, so effective is it in creating an atmosphere of collapse and altered mentation. But I’d be damned tempted to try, if for no other reason than the leg-breaking bass lines and the very sweet guitar solos.

Mudbath’s Facebook page is here, and the EP can be downloaded for free on Bandcamp. Check it out, unless you’re already mentally unstable or contemplating a long leap off a toll ledge.