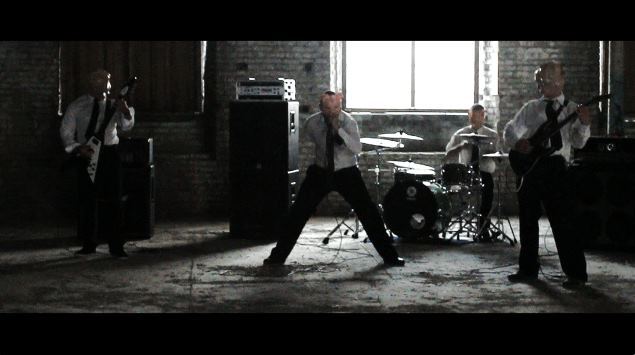 So I decided to root around some more and I found a more detailed article about the study, which compared the performance effect of “Acid Bath” by Repulsion to a pop song by a band called Infernal. Here’s what it said:

“The fast-tempo ‘extreme guitar-based’ music of Repulsion, the researchers explained, is like ‘a cacophony of sound, in which the segmentation of each individual sound from the next is difficult to identify’. This means it has less acoustic variation from one moment to the next, which helps explain why, even though disliked, it had a less detrimental effect on serial recall than Infernal’s pop song.”

The researchers excluded people who liked grind from the study, so we don’t know whether people who like grind would perform better or worse while listening to it than by listening to music with more “acoustic variation” or just dead fucking silence.

This study also omits another important question: if you listened to grind while working, would you want to rip the throat out of the next motherfucker who tried to jack with you? I’m pretty sure I would. On the other hand, I pretty much feel that way all the time when I’m at work.

There’s yet another flaw in this study: not all grind is “a cacophony of sound, in which the segmentation of each individual sound from the next is difficult to identify”. A lot of grind that I’ve been listening to lately has a lot of variation in the tempos, and the riffs are like jackhammers that move my head up and down and side to side and sometimes send it flying across the room.

Take the song that’s featured in this new video by a band from France named Unsu. I’m pretty sure I’d have a hard time getting any cognitive shit done while listening to this song. In fact, when I heard it the first time, I dented the wall of my workspace and put a crack in my desk. With my head.

The song is named “The Filthy”, and its off the debut EP from Unsu, also named The Filthy, that was released by Kaotoxin Records earlier this year. It’s fuckin’ filthy. And the video is yet another awesome accomplishment of Dead Parrot Productions, who seem to have a magic touch.

So, where does that leave us? Here are my conclusions:

1.  Get a job that doesn’t require “cognitive tasks”.  I’m thinking about chicken sexing.

2. Listen to Repulsion all the fuckin’ time.

3. Become unemployed and lay around all day like a sloth until the money runs out.  Then kill yourself.

4. Figure out how to become a psychological researcher. Or a paid psychological test subject. Because doing nothing of any conceivable utility for money sounds like a solid strategy to me.

So, here are a couple of questions for all of you (and no, I ain’t fuckin’ paying you for your answers): Do you listen to music when you work (whether it’s a job or school or whatever)? And if you do, what do you listen to? Do you think music helps or distracts you?

And while you’re pondering those weighty subjects, here’s more filthy Unsu music. Maybe it will help you think . . . or maybe it won’t.