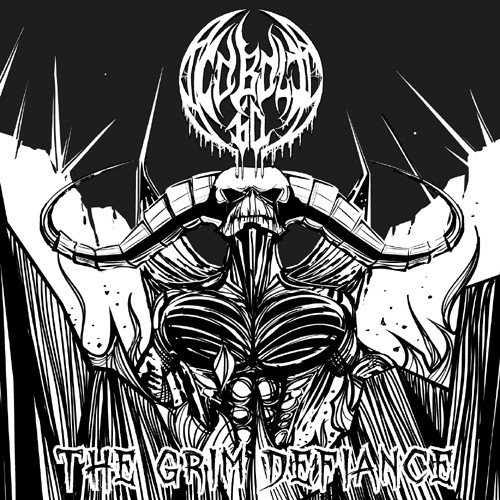 This is the second part of a round-up of noteworthy news and music I picked up while browsing the web today. The first part is here.

I was introduced to Norway’s Cobolt 60 by my NCS co-writer Andy Synn via a post he wrote in February about the band’s debut album Meat Hook Ballet — an album that came out 10 years ago and was then followed by . . . 10 years of inactivity. Cobolt 60 began as a team-up between Daniel Olaisen, a/k/a Død of Blood Red Throne, and BRT’s original vocalist Flemming Arnesen-Gluch, a/k/a Mr Hustler (who handled both drums and vocals on Meat Hook Ballet).

What led Andy to write about the band’s debut album was the whispering of rumors that Cobolt 60 were working on new music. Now we know the rumors were true. On September 14, a new album entitled The Grim Defiance will be released by Demonhood Productions/Neseblod Records, and pre-orders can be placed at this location.

But that’s not all. As of today, two tracks from the album became available for streaming — “Hammer the Creationist” and “Sort”. I have a feeling that Andy will be reviewing the album when the time is right, so I’ll just say that if you want to burn yourself with a dose of superb black thrash hellfire, you should listen to these two songs . . . and you can do that right now:

As previously (and gleefully) reported, Dysrhythmia have a new album coming. Entitled Test of Submission, it will be released by Profound Lore on August 28. Today I saw that Stereokiller has started streaming a new song from the album called “Like Chameleons”. The Stereokiller summation of Dysrhythmia’s stylistic fusion works well as description of this song, too — “progressive rock, heavy metal, indie-rock, avant-jazz and ambient mesmerism are combined with some really messed-up (dys-)rhythmic and disharmonious structures”.

This is a very cool track, and you can listen to it at this location. One other song from the album (“In Secrecy”) got an earlier debut at NPR — and it’s also well worth hearing. The album should be an amazing listening experience.

The more I hear from this UK death/doom band, the more excited I get for their new album, Vessels of Light and Decay, which Profound Lore will be releasing on September 13. I’m also still loving the cover art for the album, especially after seeing the entire piece of art of which the cover is a part (click the image above to see an even larger version of it).

The latest offering from the album is a track called “Communion”, which Invisible Oranges exclusively premiered yesterday (here). It starts with a groaning trencher of doom with a double-bass under-carriage, but man it starts to chug and charge with blasting drums and rapid-fire riffing, interspersed with little death ‘n’ roll breaks that’ll get your head moving and a couple of divergent guitar solos. The funereal doom elements return eventually, making this a dynamic mix of the vicious and the forlorn. And the vocals are just fucking wonderful. Really stoked for this album . . . .