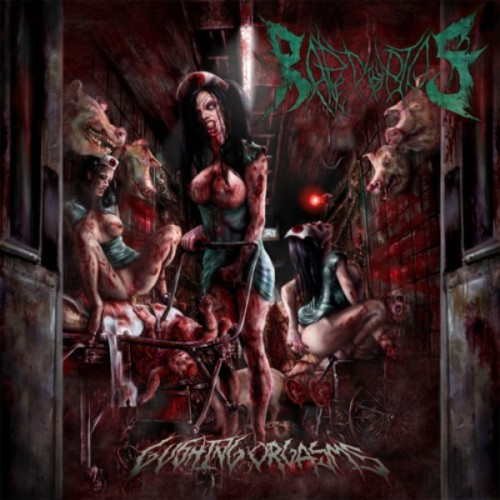 (Phro reviews the new EP from Raped By Pigs, who are from Peru. If memory serves, this is the first review of music by a Peruvian band at NCS.)

Sometimes bands choose weird, offensive names just to be…well, weird and offensive. Other times, bands choose those names because they embody the music so well. Peru’s Raped by Pigs is definitely in the latter group. As you can probably imagine, they would be most accurately pigeon-holed as a slam/brutal death metal band, if one wanted to get all taxonomical and shit.

But, as much as I love grouping band into genres, sub-genres, and penis size, I couldn’t find any pictures of these guys’ dangly bits (kinda makes you question their metal cred, doesn’t it?), so we’ll have to actually talk about their music instead. Damnit.

Gushing Orgasms 2 is not the music of the apocalypse, but the music of the survivors’ great grandchildren sitting around a campfire of dried out human shit. These unfortunate descendents swing back and forth between the mad, ecstatic joy of surviving as the world slowly burns itself out like a dying sun and the slow, furious sobs of remorse at the loss of deep dish pizza only glimpsed in half-forgotten ancestral memory. (“WHY?” they scream, “WHY DIDN’T THEY SAVE THE PIZZA??”)

But, pizza-lamentations aside, this music is basically just heaviness. It’s like falling asleep at the beach and waking up to two, bulbous, blubbery sea lions making sea lion babies on top of your chest, their sea lion sex juices splattering all over your face as they grunt and heave, pounding away on top of you. The fat fucks don’t even notice you gasping as your rib cage cracks and collapses around your lungs and you slowly suffocate. 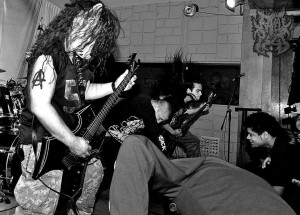 Like sea lions’ steady, unabating gyrations or the daily onslaught of extreme weather patterns, forest fires, and starvation, the downtuned guitars and bass grind away at your brain for a good 30 minutes, switching between the frantic riffs and ponderous, thundering breakdowns that one expects from a slamming brutal death band. The drummer does not let up, keeping at it like an unrepentant sea lion cock, and you can feel that bass deep down in your loins doing all sorts of horrible things to your reproductive organs.

The vocalist is where this band really shines for me though. (Shines? “Sinks lower into the seas of depravity like a humpback anglerfish given a microphone” might be more accurate.) Using grunts, growls, pigs squeals, and inhales, he digs deep within his colon and spews up the most corpulent shit he can find. The lyrics, as far as I know, are about…something…bad? According to the Metal Archives, the lyrical themes are: gore, perversion, and horror, but I’m inclined to believe that there are no lyrics and that the vocalist is actually channeling the pig spirit that lives within us all.

Generally, the production is pretty good, but track 7 (“Repulsive Desires in Your Writing”) sounds a bit muddy and washed out. I’m not sure how that happened, but while the music is still listenable, it is kind of weird.