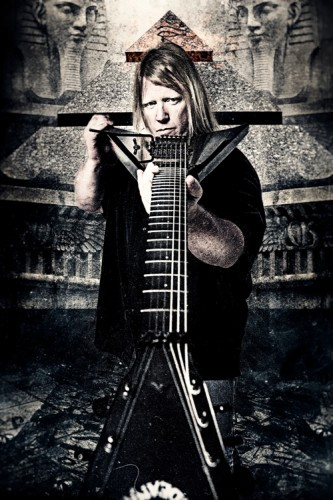 (Our man BadWolf interviewed Karl Sanders of Nile by phone earlier this summer, and they discussed . . . well, I’ll let BadWolf give you the preview.  I’ll just say that I had so much fun reading this that I wish it had gone on a whole lot longer. We reviewed the band’s latest album, At the Gates of Sethu, here.)

What hasn’t been said about Karl Sanders? The man plays some of the best guitar in all of technical death metal, and in a scene ripe with imitators and mindless noodling, Nile stands out. In other hands an Egyptian motif would be a mere gimmick, but Sanders turns Nile’s aesthetic and musical choices into an original and compelling statement. Most death metal sounds like muck, Nile sounds like a grand adventure.

And his secret, as divulged to the BadWolf, is unstoppable work ethic. We chatted on the merits of hard work, ancient wisdom, and the Arab Spring. Oh, and codeine cough syrup. Tech death goes Crunk after the jump.

BadWolf: OK we are go.

Karl: So my first question today: this is NoCleanSinging.com right? Well there is some clean singing on the new Nile record, how does that factor in with the theme of your website, here?

No Clean Singing is sort of a… Well, not euphemism, but It’s just a saying. I didn’t name the website, my editor did. He started the blog sort of at the end of that really bad pop-punk-meets-metalcore explosion when everyone was doing clean vocals really badly. We aren’t actually opposed to clean singing at all. I get a lot of weird comments on it.

OK, I just didn’t want to lead you into being a divisive, rebellious faction and cause you some sort of end-of-the-world cataclysm.

I mean… That’s sort of what I’ve been trying to do with myself for my entire life so please, assist me in that mission!

I appreciate that you took charge and started asking me questions. That’s cool.

Well I’m sort of losing my mind. I’m about a hundred interviews in, two hundred, I can’t even remember how many I’ve done. Three a day for the last month and a half. So at this point I’ve completely lost my mind and interviews just go where inspiration takes us.

What blows out your voice worse: Nile or interviewing about Nile.

Interviewing about Nile. No question about it. Last evening I had been going for uncounted hours, I got a cough and it was the middle of the interview—I had to do something! So I went to the medicine cabinet and grabbed a cough medicine and took a big slug of it. Well, I should have been more careful because this was some.. hydro… corto… codeine…

It was some narcotic-ass shit. I’m just trying to do the interview, but I took much too big a swig and in the next ten minutes of the interview the room got hot, my head was spinning, I was falling alseep while words came out of my mouth! I got woozy!

So you’re doing the press circuit, the record is done, so now that you’re done birthing, what goes through your mind?

At this point it’s a struggle maintaining my sanity in the face of the wide-ranging responses flowing back to us from the internet. From ridiculously overblown praise to utter contempt. I read a review yesterday that actually told me to retire, and the next was an eleven out of ten. The internet’s an insane place. At this point in the promtion cycle I’m in a state of information overload going in and information overload going out because I spend my entire day talking about Nile. I said to someone yesterday that I would rather talk about anything other than Nile. 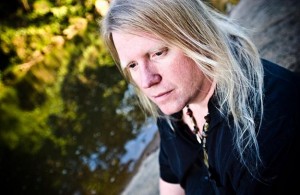 See I need to talk about Nile, and I feel like I’m being a dick to you. Not to sound glib, but I need to ask: you’re reading your own reviews, why do you need to ask at this point?

It’s just how I’m wired. Our other guitarist, Dallas, he just honestly and truly—to the point where it’s scary—does not give a fuck what anyone else thinks. Good review, bad review, he won’t even read them. I’m like dude, I wish I had that gift of not giving a fuck, because from my perspective I put ten months of my life into writing this record. I care. I put my life into it.

That makes a lot of sense but from my perspective, I will never read or write a Nile review: I know what I’m in for. I know it will be worth my time. How do you keep that consistency?

We don’t think in those terms, we just put in 110% to our music every day. From that perspective, maintaining consistency isn’t on the table, we just give it our all and hopefully that comes across, mission accomplished.

So the new record is At the Gates of Sethu, Sethu I assume meaning the evil god Set.

No, actually. Sethu is a hideous serpent in the tenth division of the Egyptian underworld as referenced by the Book of Gates. There were twelve divisions in their underworld, each division corresponding to an hour of night, and the sun god Ra had to pass through all twelve divisions of the underworld each night, through all twelve gates and do battle against evil to finally emerge as the new morning sun. so in the tenth hour of night, gate of Sethu.

So what’s so special about Sethu and his tenth gate?

Oh I was just flipping through the pages of the Book of Gates and just thought it looked cool. Maybe the ninth or third gate might have been better song material, I don’t know. I just went with this one. I know, it’s arbitrary, but I like it.

I was under the impression that you achieved some scholarly acclaim for your work with Nile.

That is true. College professors write me letters. I was asked to speak years ago at the Flanders Petrie museum of Egyptology [http://www.ucl.ac.uk/museums/petrie] in Britain. Oftentimes I receive letters from students also wanting to talk about this or that or telling me they wrote a term paper with my work in Nile and received good grades. All of that’s true but I don’t have a degree. I’m just a guy who happens to be interested in the subject. I do have a lot of Egyptology books! I think putting 1010% of myself into my music means putting that much into lyrics as well.

But in extreme metal in general there’s a lot of lyrical stuff that gets sort of shoved under the rug, and maybe for good reason. How does that make you feel?

I’ve had a lot of thoughts about that over the years. Right now where I’m at is: I think music is a form of entertainment. Some folks are entertained by more interesting things than what other folks are entertained by. For those folks who would like to have mundane subject matter, there’s plenty of bands willing to do that, and that’s alright. There’s time when I put on Looney Tunes and have a blast watching Bugs and Daffy go at it.

Do you ever wonder about running out of lyrical material?

Absolutely not. Right now I’d say with 6,000 years of Egyptian history to draw from, what’s a few death metal albums? It’s a drop in the bucket. I’d much sooner run the risk of running out of an audience.

On Those Whom the Gods Detest the movement of Islam into Egypt was a major theme. That moves away from ancient history which is more what you’re known for.

That move was not a move out of desperation because I’d run out of topics. I simply followed what I thought was an interesting idea. Having multiple ideas is OK.

Well that opens doors! Egypt is having a fascinating moment in history right now; have you ever considered writing the Arab Spring Nile Record?

No! I stay out of politics. I had wondered if the revolution would be a fertile topic for a while and decided against it, especially with the volatility of extremist Islam. You know, I don’t want to end up on the… wrong side of the argument.

But you have all this knowledge about this ancient culture that lasted longer than our own has. There’s so much experience to draw from, do you have any prescription for modern life, having studied ancient life?

Well, I’m a day-to-day realist. I’m not really looking for ancient lessons to apply to my life, I get up in the morning and work hard. That’s my answer to everything. In that sense I’m a fan of Alexander the Great. He did not conquer the world by second guessing himself. He seized the moment! That’s the way I think these days. Go do something about it.

I admire that attitude. I don’t know, I feel like my generation is perhaps introspective to its own detriment.

I think we’re living in the last times, my friend. You are the final generations. The world cannot possibly last much longer.

And what do we do with that knowledge?

3 Responses to “AN NCS INTERVIEW: KARL SANDERS OF NILE”