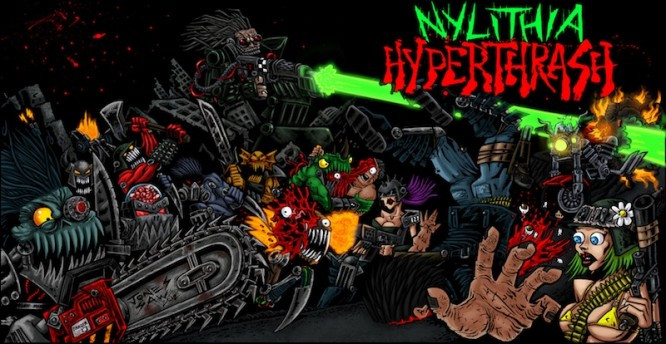 What do you get when you combine blazing speed, mind-blowing intricacy, head-slapping grooves, and creative song construction? You get Hyperthrash. More specifically, you get the latest single from the thoroughly entertaining Nylithia, which we are delighted to premiere for you today.

We first came across this Vancouver/Langley-based band through a recommendation from an NCS reader back in March and included a feature on them in one of our MISCELLANY posts. They are in the midst of a project that’s somewhat unusual in the current scene: They’ve been periodically releasing one song at a time, beginning with a premiere of the song (Metal Sucks debuted the last one) and following that with a month-long free download of the track on Bandcamp, after which it becomes available as a “pay what you want” download.

Each song comes with its own distinctive hand-drawn artwork by Ryan “Humanburger” Jones. And on top of all that, the band have been releasing sweet music videos for each track — and those have been racking up a slug of hits on YouTube.

Eventually, all of the singles will be combined into an album — Hyperthrash — and we hear that when all of the singles have been released and the album is thus complete, it will be made available on vinyl with a booklet containing all the artwork, as well as released in CD format.

But that’s all in the future, because the single we’re premiering today is only the fourth track to be released so far, and more are coming. However, the song we have for you today is nothing less than the album’s title track — and man, fair warning: “Hyperthrash” will blow out your circuits. All of them.

This ain’t no retro-thrash. It’s thrash from some accelerated parallel universe. It’s a balls-to-the-wall, fret-burning, drum-shredding, neuron-twisting explosion. Grab hold of something stable and press play:

To get the first three Nylithia tracks released before this one, go HERE.  And watch that Bandcamp page and Nylithia’s Facebook page to find out when the free download for “Hyperthrash” begins.