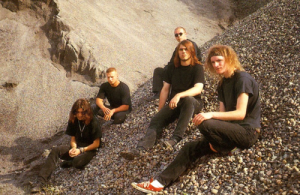 To begin, there are some talented fucking musicians at the helm: Dan Swanö and Mikael Åkerfeldt. Those names alone should give you a raging boner, and an idea of the professionalism and epic talent behind the music.

Crimson is forty minutes long. A one-song album. When any song runs longer than the average television show, a number of assumptions might be made: The song contains tasteless, long-winded solos that are less about art and expression and more about the musicians showing off. The riffs become mind-numbingly repetitive. There are probably large sections of creepy ambient noise and samples from bad horror movies linking transitions in the song to add to its length.

Crimson avoids such pitfalls, keeping the listener engaged from the beginning, punching you in the throat right at the start. A nice pace is established as the song vacillates between well-placed clean vocals and growls. The song develops not unlike a caterpillar morphing into a beautiful butterfly—an evil fucking butterfly that will chew out your eyes as you scream helplessly, your muscles paralyzed from the venom which digests your flesh just before its slurped up by the insect.

Which isn’t too far from the truth. Crimson is a concept album, the lyrics outlining the narrative of a future kingdom in which the human race is fading away. Bearing a child has, for some unknown reason, become impossible. The king of this vanishing empire dies. Then there’s a successor. The successor is challenged. Battles. Bloodshed. Betrayals. A single miracle child. Malevolent deities drinking the blood of men. Reminds me of a Greek tragedy. Only with really loud guitars and very angry actors growling out their lines.

There’s even a section where the dead king returns as a ghost urging his dejected soldiers to fight on, Dan’s voice layered in this ethereal reverb that punctuates the scene nicely.

Even the artwork on the cover of Crimson is epi—. . . remarkable. Duncan C. Storr draws a surreal, psychedelic chamber of stasis pods that contain the leaders of the kingdom. They have been frozen until a resolution to the impending doom can be found.

Doom. Almost as bad as the word epic. How about the word calamity? Impending calamity. That works. Next paragraph.

It’s important to note that Crimson was recorded in 1996. This was before the popularity of “progressive” metal was as it is today. Take just about any current band that combines growls with clean vocals and you can hear the similarities.

Like any good story, the song unfolds naturally like acts in a play. By the time it comes to an end, the body count is enormous. The future kingdom lies in ruins. But it has been saved by a brave few . . . sort of. I won’t spoil the ending. Just know that your brain will be mush from banging your head so hard for so long.

There is art. And there is exceptional art. Crimson certainly falls in the latter category. (Its sequel, Crimson II, is an excellent follow up, but lacks the authority of its predecessor). So, I argue that Crimson reclaims the power and substance behind the word epic. Conquers it, really. Dismembers the word and bashes your skull in with the bloody limbs—and it does this for forty epic minutes.

Note: The word epic is used fourteen times in this review. The irony is palpable.

29 Responses to “THE DREADED E-WORD”