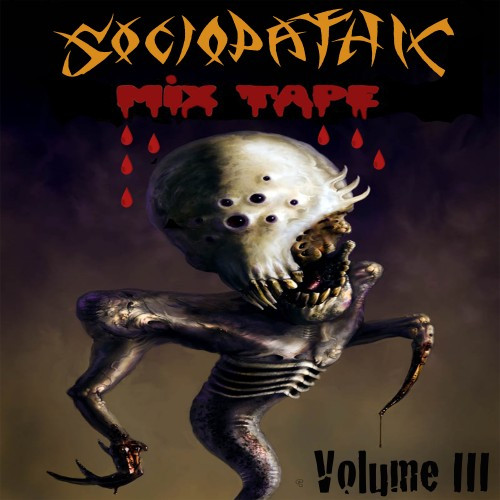 Sociopathic Sound is a project that apparently has been 10 years in the making, with the objective of launching a metal-focused web site. The launch hasn’t happened yet, though the under-construction site can be viewed here. As part of their effort to build an audience base for the planned web site, the folks behind Sociopathic Sound have been compiling metal mixtapes for free distribution. I just discovered the project this morning, after seeing news about the release of a brand new mixtape — which turns out to be the third of these things.

Sociopathic Mixtape Vol. III is kind of mind-blowing. First, it includes songs from 81 bands (actually, there are 9 more “hidden” tracks that are included in the file for those who download the entire mixtape — which brings the total to 90!!!).  It adds up to more than four hours of music.

Second, I recognize a lot of the bands on the 81-song track list, and the ones whose names I recognize are killer; we’ve featured many of them at NO CLEAN SINGING. Here are just a few: Hypno5e, Gaza, Ad Patres, Analdiktion, Vimana, Severed Crotch, haarp, Maruta, Plague Widow, Trepalium, Withered, Hivesmasher, Tiger Flowers, Co-Exist.

As even this very small listing of names indicates, the music on the mixtape spans a really diverse array of metal.

And to repeat: It’s FREE.

To stream the music and get the download if you so choose, use this link: