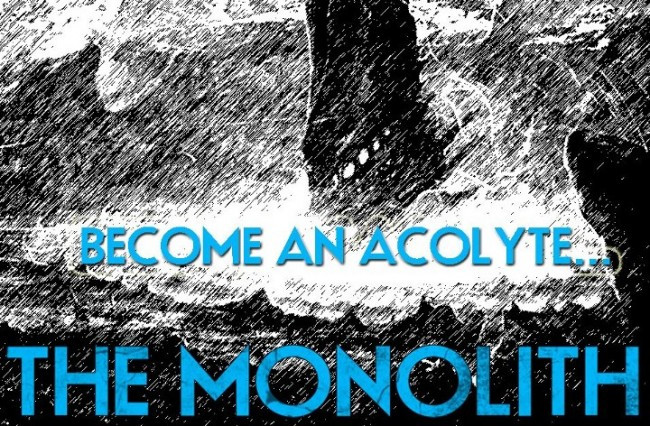 It’s time. Time for a big plug about an ambitious new metal site about to be born. Some of you have been hearing rumblings about this project for a while, but the rising has now finally begun. Its name is THE MONOLITH.

I’ve been a behind-the-scenes, fly-on-the-wall witness to the development of this project for quite a long time, but have been keeping my gabby yap shut until it reached the point where the principal organizers began disclosing information publicly, and that’s now happening. So here’s a recap of what’s been revealed to date (and more information will be coming soon). In the interest of full disclosure, please be aware that although what follows is based on publicly disclosed info, these are my words and they haven’t been reviewed or approved in advance by The Monolith’s operators. Also be aware that lots of the people involved in this venture are friends of mine.

This isn’t going to be just another metal blog (for example, the awesome Par Olofsson has designed the site’s artwork), although it will certainly include the kind of content you would expect from a metal blog. It’s billed as “an entertainment hub for alternative culture, focusing on music (and film) from the very darkest corners of the human mind”. So what exactly does that mean?

Well, at its core it’s about trying to build a community of people who are passionate about metal and who want to collaborate in supporting the scene and seeing it progress in a positive way. The site already seems to have attracted the backing of lots of artists, fans, label reps, PR folks, etc.

The Monolith will, of course, include the kind of free online content that readers have come to expect from a top-flight metal blog — breaking news, album reviews, interviews, song and album premieres, etc. — and the mission will be to generate positive, interesting, and entertaining writing. The names of all the writers haven’t been revealed yet, but I can tell you they’re an experienced, knowledgable, multi-national collective of people whose names you will recognize and who have experience writing for or running their own blogs. I’m expecting good reading from them. But there’s a lot more in store, too.

The Monolith plans to include a variety of additional “premium” features that will be offered on a subscription basis, for a modest annual fee, including a built-in profile system that will allow members to communicate with each other and with participating artists through an internal messaging system. In addition, here are a few of the other special premium features, as described by the site’s organizers to date:

The Monolith plans to have an international event calendar with an up-to-date list of metal shows that’s searchable by country, local region, town, or even specific venue, as well as by genre of music (and they’re planning to color-code the listings to provide an immediate idea of what kind of music will be on offer. Subscribing members (such as bands and promoters) will also have the opportunity to add show listings, with event times, maps of venue locations, and tour posters. Members planning to attend events can also add that info to their individual profiles on the site and see who else is going.

Yep, a record label, too — one that intends to focus on distributing music for smaller independent artists. Monolithic Records will hold onto an exclusive right to sell the music online for an agreed period of time (and at a price chosen by the artist), but the artists will retain ownership of the music (as well as a significant share of the revenue) and will have complete freedom to do with the music what they wish once the Monolithic exclusivity period expires.

Members of The Monolith will be offered discounts on the online purchases, and ultimately the plan is to offer options for vinyl pressing and CDs. The site’s first offering for members is a free download of Conquer/Collapse by Brent Petrie. The site also plans to organize and promote shows and tours, with members getting “meet and greet” time with the artists.

There are still more features in the works that will be revealed in the coming days and weeks. And to help build interest, The Monolith is in the middle of a prize-giveaway campaign. You can find out more details about the site, its plans, and those prizes by visiting The Monolith’s Facebook page or www.themonolith.com.

To return to the word I used at the beginning of this piece, The Monolith is indeed a very ambitious venture, but it’s one I hope will succeed, not only because there are some good people involved in it but also because its positive, collaborative, community-oriented concept is one I back whole-heartedly. Check it out.

17 Responses to “THE MONOLITH RISES”