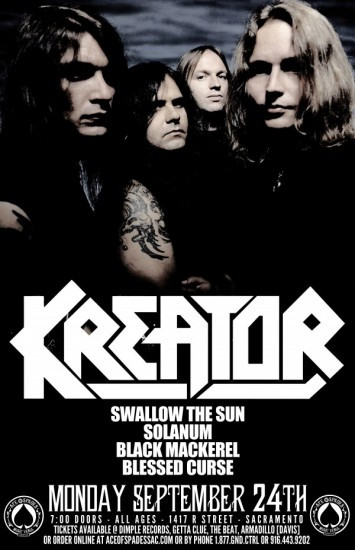 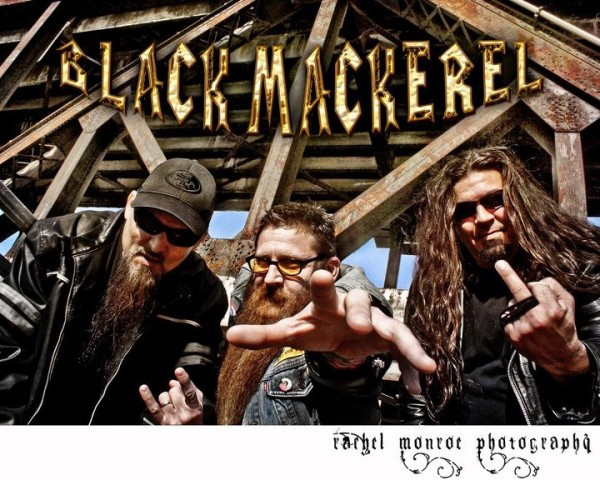 It must have been three-piece night for a little bit at Ace on Monday, because two of the bands that night were three-pieces. The first was Black Mackerel, a sort of stoner, crust punk, rock hybrid that we often find ourselves referring to as Beardo or Hipster metal since there seems to be nothing else that really describes it. Not without its merits, of course — their guitarist does have some pretty awesome facial hair.

I actually enjoyed these guys the most out of the three local bands. Their music should instantly appeal to anyone who has any passing love for bands like The Sword and Red Fang, because they pretty much inhabit the same realm. I fall into that camp pretty hard, so even though the crowd was small for these guys (more would file in later) I think they had some real fun with it. It was clearly different from what I was expecting for the rest of the night, but those who did get to see them got a really good smattering of songs and a good show to rock out to. 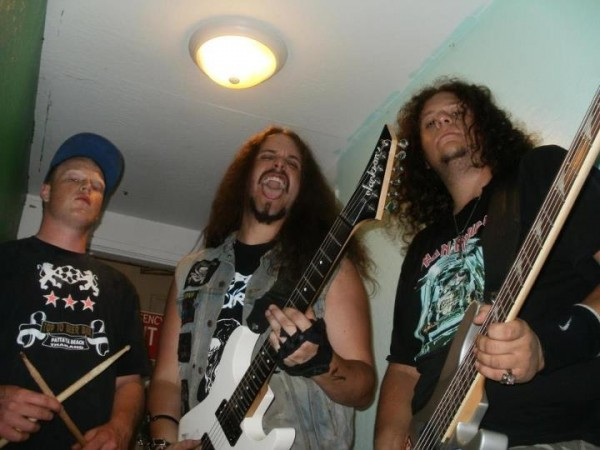 Blessed Curse yearn for a time gone by. They’re another three-piece band, but this time locked viciously hard into the thrash movement. So much so, that they matched the crowd the most with the denim jackets and endless patches. They provide the sort of music you would expect to find in a more sincere and less biting version of most heavy metal documentaries. They clearly believe in what they do and they have written some long-ass epic thrash songs to prove it.

They have a pretty solid DIY aesthetic in how they play, which I think carries over into their set, so when things would appear sloppy (i.e., random feedback during the quiet sections in between songs, guys sort of stumbling over themselves) it tended to fit in pretty well.

The vocals are of a lower-range variety, and I can see them being a bit polarizing because they’re sort of one-third shouted, one-third growled, one-third sung, and whatever you do with the extra .01% is your business. They played four songs and were able to get the crowd moving pretty good, so that was cool to watch. I had my high-up vantage point so I was able to take everything in and definitely got the feeling that they were sincere and believed in what they were doing. If you’re looking for some upstarts, you might want to check these guys out. 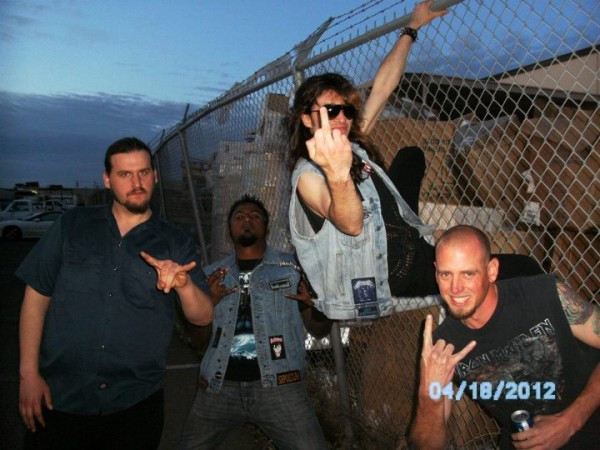 Solanum were the second thrash group making their appearance tonight, this time as a four-piece. They had a good chunk of the crowd following them and they seemed impressed every time a pit spontaneously broke out. If you hadn’t guessed by their name, the subject matter of their songs tends to include a lot of death and zombies. They also write some pretty long-winded thrash songs that all tend to move at a breakneck pace.

I was able to catch these guys from a couple of angles and they seemed to be having fun and were lively. They sounded a little bit more “professional” in terms of audio quality and general ability to bullshit with people, but I think that just shows that they are experienced as a band.

The vocals were snarled and screamed throughout the songs and actually shared a bit of a similarity with the night’s headliner. I caught some minor Skeletonwitch essence there as well, but that might have been coincidental since it was mostly the vocals making the music sound that way. These guys will probably be easier for a lot of you to get into if you’re looking to check them out. I would recommend it since it seems like they were right up the venue’s alley that night. 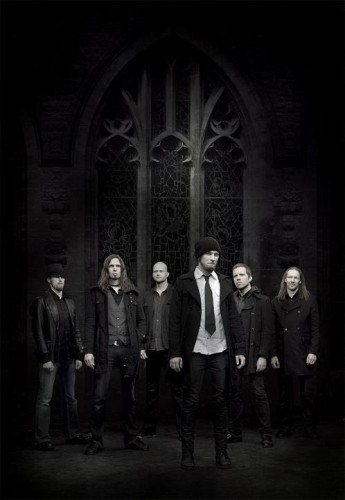 It feels odd saying this but I went to a Kreator show with almost the sole purpose of seeing Swallow The Sun. Kreator are fucking great, no doubt, and it was exciting as hell to see them, but you know how these things work. Swallow the Sun are a smaller band from Europe who undoubtedly know that if they’re going to get many chances to come to the States and if they do how many of those times will they come to Sacramento instead of just skipping over it in favor of doing SF and LA, then hauling ass out of our lovely state?

So, the moment I saw Swallow The Sun were on the bill I jumped at it. Why wouldn’t I? I loved Emerald Forest and The Black Bird, and according to Setlist.fm, the scant number of songs that they had been playing for this tour leaned heavy on that disc. I have no idea what the crowd looked like for this, because I took the opportunity to slip in to the front row with relative ease and just take in the whole experience. I got a quick laugh when their bassist started sound checking to Tool’s Schism.

I have no idea how anyone in Swallow The Sun is able to rock out to their music. I figured they would pretty much all stand there like the lead vocalist and just look miserable. But no, anyone with hair (so three of them!) was rocking out pretty hard. Their keyboardist is surprisingly intense, and their bassist seems to be having the most fun with things.

The mix was a little quiet at times, but you could hear everything clearly. The venue was nice enough to keep the lights blue for a majority of their set, which I thought was a nice touch. Their opening track was the titular “Emerald Forest”, and let me say this, that opening segment with the woman singing the main melody of the song is a lot more intense in person than you can imagine. Same goes for a good chunk of the miserable “Cathedral Walls”.

The rest of their set was actually pretty heavy, with “Hate”, “Lead The Way!”, “Psychopath’s Lair”, and “Swallow (Horror Pt 1)” rounding things out. All of those songs are a bit faster than what most people know the band for, but honestly, that’s like moving from snail to turtle speed.

I would’ve loved to see these guys with an extended set. I have a wishlist of songs I would love to see Swallow The Sun perform, from “Justice Of Suffering”, to “Night Will Forgive Us”, to “Lights On The Lake (Horror pt.3)”, to “Hope”, to “Through Her Silvery Body”, but they have a pretty limited set time on this tour, so I had to settle for the five-song, forty some odd minutes of misery that they dispensed on the audience.

I’m sure most folks in the venue had no clue what they were in for, since StS are nowhere close to thrash metal, but damnit, I enjoyed the hell out what I did get to see. 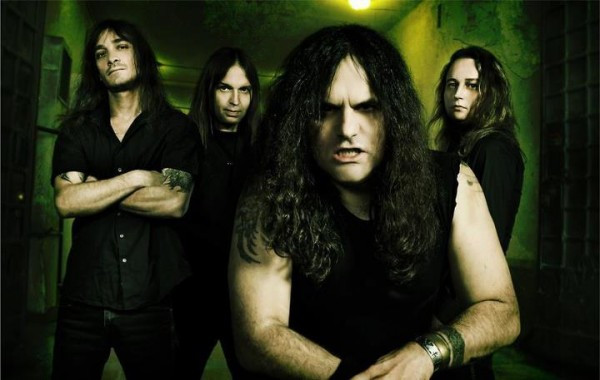 Hey guys, I don’t mean to shock you, but Kreator put on one hell of a live show. They had an amazing stage set up, one of the best I’ve seen so far, consisting of a whole bunch of lights tuned to the music, a six-foot high drum riser (seriously, their drummer was almost touching the venue’s roof), and five different PVC banners that made up a gigantic version of the awesome Phantom Antichrist artwork. On top of that, we even got smoke machines and some seriously good venue lighting.

The whole thing just converged to have Kreator put on one hell of a show for the pittance of people who could drag themselves out of the house to see them on a Monday night. They made it pretty clear that they don’t like taking days off (which is why Accept wasn’t there), but Kreator got to have pretty much the whole crowd to themselves. Although the room wasn’t full, almost everyone who came to the show was moshing like hell. I know Rob from ThatDevilMusic was impressed with the moshing that Sacramento does, and even during smaller shows people are willing to just let loose.

Kreator front man Mille Petrozza is a chatty motherfucker and a consummate showman. Guy really does know how to talk to a crowd and at times was willing to have a conversation with folks. He’s easy to understand too, which is a bonus on my end because most bands I see don’t seem to be able to understand the value of enunciating once they get behind a microphone. He was funny and his enthusiasm for music was pretty goddamn infectious.

He screamed out pretty much every song title, and once they broke out the “Flag of Hate” for the last song I was pretty much endeared to the band. My enjoyment of their music may be limited to a scattering across all of their CDs, but the live show was good. That stage set-up is impressive as hell, but the fact that my remained locked on to the band and how they were rocking out is an equally impressive statement. If you have any sort of enjoyment for Kreator’s music, I would recommend checking out their live show if you haven’t done so.