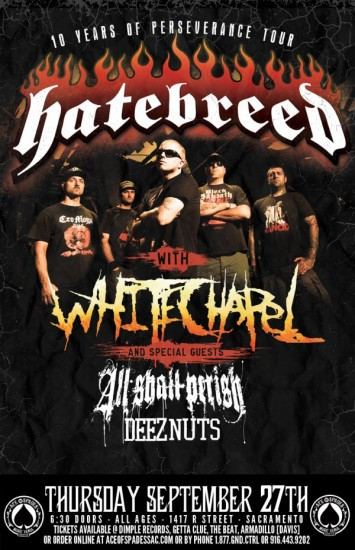 (In this post DGR reviews the Sacramento show of the current Hatebreed-Whitechapel-All Shall Perish tour on September 27.)

Here’s the thing about a show like this. I know that I am not the hugest fan of the hardcore scene and I’ll be the first to admit that I was really only there to see All Shall Perish and Whitechapel (for the 2nd and 3rd times, respectively), and if Deez Nuts turned out to be great, fine. If Hatebreed were awesome, then that would be great, too. However, I found myself a little more excited when it finally hit me that this was what they were calling the Ten Years Of Perseverance tour and that Hatebreed would be playing pretty much all of that disc front to back, with some of their other songs interspersed throughout. Now, if you’re going to go see Hatebreed it may as well be during this tour because man, Perseverance is kind of THE Hatebreed album and everything after that was more for fans.

I managed to get some good parking and they already had the doors open, which was a little odd since the flyer said 6:30 doors, 7:00 start time. Little did I know that they would actually start the show about half an hour early and end it really early and pack a ton of music in between. Seriously, I got home at 10:44, which is nuts. I usually don’t expect to get home from one of these until 11:30-ish. Also, I bumped into the folks from RockHardLive, one of the local video companies, so any footage comes from them. You should check them out and follow their YouTube channel, because they do some damn good concert footage from around this area.

Your enjoyment of these guys is probably going to be predicated on a few things: 1) They’re pretty hardcore, no doubt about it (looks and everything); 2) They’re called Deez Nuts (granted, yeah, I thought that song was cool, too, but I never would have considered naming a band after it); and 3) They have a song called “Your Mama Should’ve Swallowed You”. If you haven’t figured it out, these guys aren’t the most serious bunch out there, basically taking the hardcore scene and having fun with it.

They actually wound up going on stage a little earlier than I had expected, since the flyer said Doors at 6:30, but they literally jumped on stage at 6:35 and didn’t stop. I think most people were expecting the first group to jump on at 7, because I saw a huge crowd at the door around that time. To be honest, the music is pretty straightforward, so you kind of know what you’re getting into. The vocal delivery was half hardcore vocal stylings and half semi-hip-hop. I did enjoy the stage banter, because it seems like the guys know they’re running into people who have zero idea who they are, so they spend a quick chunk of their set making fun of that.

They packed quite a few songs into the 35 minutes or so that they had, basically never stopping from the moment they started. I don’t even think they took much of an applause break. Their vocalist also announced that they were half from Australia and half from New York, and the moment I heard that I simply couldn’t unhear the accent, no matter how light it was. 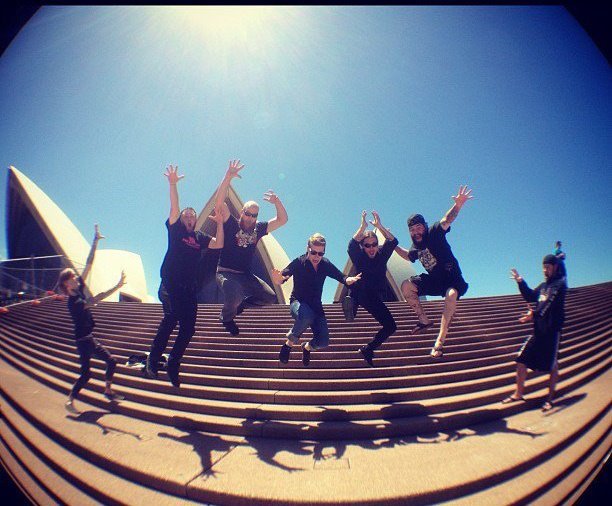 All Shall Perish also wound up with a pretty short set, sticking to songs that appealed more to the -core side of their fan base. It was a pretty solid mix of all their albums, each one getting two or so songs, which was cool. I’m more familiar with the latter stuff but this was definitely one of those cases where I noticed the songs they didn’t play more than the songs they did.

I love “Gagged, Bound, Shelved and Forgotten”, so opening with that one was kind of a show stopper and everything after that was just icing on a pretty good cake. However, I was somewhat disappointed by the lack of “Christ Illusion”. I’m sure they’re probably ungodly bored with that song by now, but damnit, it’s one of the best ones they’ve ever done. I also found myself pulling for them to break out “Spineless”, if just to throw everyone off guard since that whole opening section is pretty nuts.

They didn’t have as much stage space as they did in comparison to when I saw them headlining last time, that was pretty obvious. They still managed to wake up the whole crowd though. It seemed odd that for the first few songs everyone on the floor was a little listless. I had figured ASP were right up these folks’ alley, but I guess the faster more complicated songs confused the Hatebreed crowd. The box that they use for their vocalist and other band members to stand on also seems to be getting higher and higher. At least it seemed that way from my vantage point up in the bar; quite a few times it seemed like I could make direct eye contact with them.

I saw Whitechapel twice in the span of about five months one year and then never saw them again for the following CDs up until now. That means that even though I enjoyed the hell out of New Era Of Corruption, I didn’t see any of those songs live, and likewise, I was coming in a solid couple of months after their self-titled hit. I was very interested in how their live show has evolved, and what I saw was interesting.

Their set is pretty heavy on the new disc and New Era, which was fine by me. They still play two songs off of This Is Exile, but at this point they’ve evolved into a more death metal band than I think people initially expected them to become. Even with more stage space than the other groups had, the stage still seemed to get crowded as all hell, and to be honest with you, it seemed like a whole fleet of guys were standing still while the crowd focused on vocalist Phil.

They had a smoke machine going at full blast for pretty much the whole set and the stage lighting stayed to a pretty solid mix of yellow and red. The impression that I got from their live show now, as opposed to how it was when I used to see them, is that the performance is less crowd-focused now than before. It is something much more bleak and oppressive. When you have that much smoke and that much lighting, it gives the whole room an eerie (and hot as hell!) vibe. Phil seems to take on the persona of a half-walking dead man/half-scarecrow for the whole set. He’s not as aggressive and in your face as before; now he’s like a shambling corpse that screams a ton. There were times when he was just sort of leering over the crowd, head down, and with a mic swinging from his neck like something of a makeshift noose.

The music that they chose, I enjoyed the hell out of. They pretty much locked everything down by doing “Murder Sermon” and “Faces:, one right after the other, which is enough to make any metalhead proud. The folks at RockHardLive captured some damn good footage of them doing “Section 8”, which some of you will remember was one of the first songs we heard from the new disc when it was released on the Re-corrupted EP. 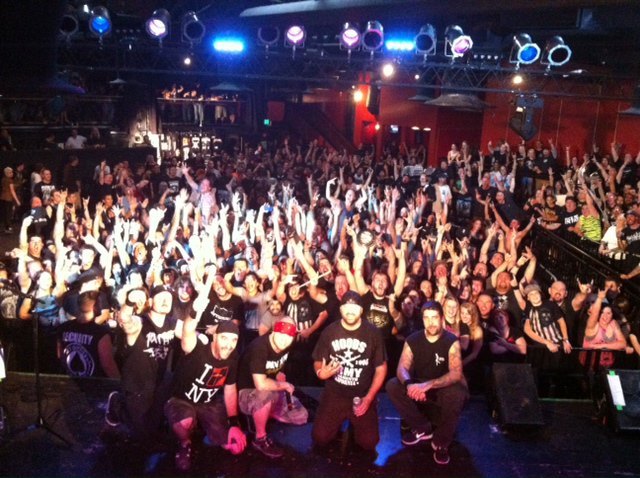 One of my biggest sins with this band was that the only other time I saw them, I passed out. Not because they were boring, but because it was Ozzfest and they were on the main stage. If you’re like me, you got the cheap-ass lawn seats, which meant they might as well have been playing in another city because all they were to you were specks on a stage. I wound up falling asleep while sitting down and watching their set. As a result, I felt like I owed it to the band to actually go and see what they had to offer, even half a decade later.

Hatebreed are one of those bands who have been almost stubbornly consistent. They are a case of ensuring that you know exactly what you’re going to get when you see that logo. That is why I wasn’t exactly too hung up over the fact they were doing the nostalgia tour of playing one album all the way through and interspersing other album singles throughout. Of course, they had a huge crowd and also a ton of security on the floor. Can’t blame Ace Of Spades for knowing what they were getting into.

The group had some absolutely massive pits, and yes, I did enjoy the hell out of them doing Perseverance all the way through. I got to hear some deep cuts, including that one song where Jamey Jasta actually breaks out a fucking high scream, which, holy shit, you don’t get to hear too often. I still get a bit of a chuckle at the whole positivity-core thing, but you can’t blame the band for having fun with what they were doing.

They seemed impressed with Sacramento’s willingness to go nuts, WHICH IS SOMETHING I THINK MORE BANDS SHOULD NOTICE AND THEREFORE TRY TO COME HERE, which was pretty cool. They had circle pits, hardcore pits, just messy-ass melanges of people falling all over each other, one or two small fights…the cops showed up (which was hilarious)…. and generally had a party crowd.

They also take a photo taken of themselves with the crowd at the end of every night, which is an excellent goodwill gesture. I’m in that above shot in the back throwing the double horns, because why not? They put on an entertaining show and although I am not a huge Hatebreed fanboy, that was still a fun live set to watch and their enthusiasm is infectious. Rockhardlive actually broke out a deeper cut song with “You’re Never Alone”, which you can see below.

Also, that cop who pulled over the blonde girl literally right as she was leaving the venue? Shame on you. At least let her get two blocks to get her hopes up.