Okay, now that I’ve gotten the details out of the way and nearly sunk this review under the weight of all those links, I do have a few words to say about the music: It’s really fuckin’ good. 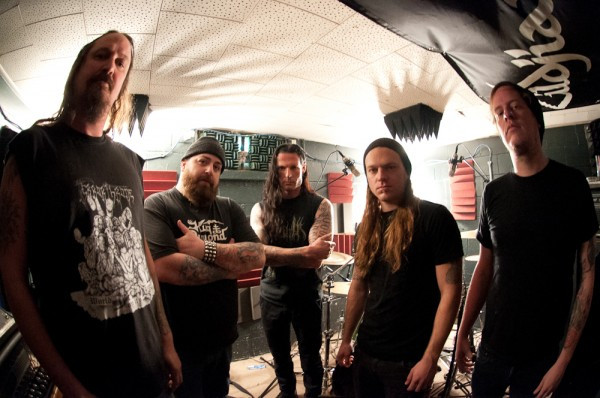 The Doomsday EP is a hell-ripping ride of primitive but quite dynamic blackened metal that moves from scathing tremolo chords and blasting drums to black ‘n’ roll rhythms to crust-punk and d-beat mayhem. It rolls, stomps, and brawls like a demon horde cutting loose in a dive bar, and it’s awful damned catchy.

While it’s mainly an up-tempo affair, my favorite song (by a nose) — “Bring Down the Knife” — hits the brakes with about two minutes left and rolls out a low, slow guitar solo that moans like the herald of impending calamity.

The production gives the music a no-frills sound, with an almost muffled drum tone and bass lines that are more felt than heard. The distorted guitars get the most prominent place in the mix, as befits this guitar-driven music, and they buzz low and heavy in the register like mutant hornets the size of condors — except when solo’s erupt like phosphorus flares.

The vocals vary in range, depending on who’s singing, but they’re all as caustic as a vat of lye.

The EP’s final track is a cover of the GG Allin song “I Kill Everything I Fuck”, and man is it a killer of a cover. A great blackened punk track with a cool, bounding bass line and a head-whipping guitar solo, it’s probably the most immediately infectious track on this release. Sitting still while it jams is not in the cards.

To date, there’s one Doomsday track (“The Punishment”) up for streaming, and it’s airing exclusively at Brooklyn Vegan.  You should definitely go there to check it out.  Pre-orders for the EP will begin on Oct 12 — check the Doomsday FB page for details when that day arrives.

Doomsday will be embarking on a fall tour with Wolvhammer and Krieg, and this is the schedule: 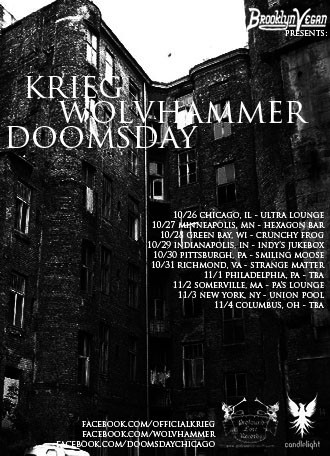