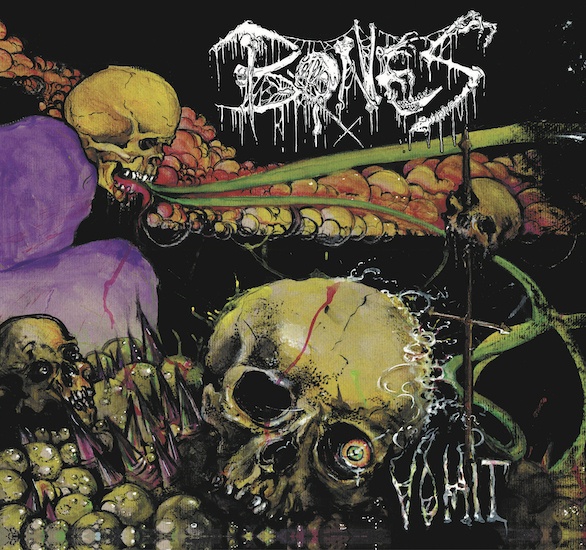 Chicago’s Bones possess a number of endearing qualities: They are not pretentious, but instead feral. Their music sounds like it hasn’t bathed in weeks, just like us. They’ve got obviously impressive technical chops but manage to sound loose and sometimes even out-of-control. They know how to groove (man, do they know how to groove!), but they’re hellraisers at heart who revel in mauling and massacre.

And as important as all that, although Bones don’t take themselves too seriously they know how to write dynamic and fiendishly infectious songs that harness together a riotous cornucopia of genre ingredients, finding the natural connection points among all of them.

Okay, well “endearing” may not be the best term we could have picked, even though it is linguistically correct — because Bones do inspire genuine affection among fans of gnarly, in-your-face metallic extremity that revels in its carnal wildness.

We could probably stop right there and just leave you to the main object of this feature, which is a premiere stream of Bones‘ new album Vomit, which will be out on October 28th via disorder-recordings. But of course we won’t shut up right away — the album’s too much fucking fun for us to clam up about it. END_OF_DOCUMENT_TOKEN_TO_BE_REPLACED 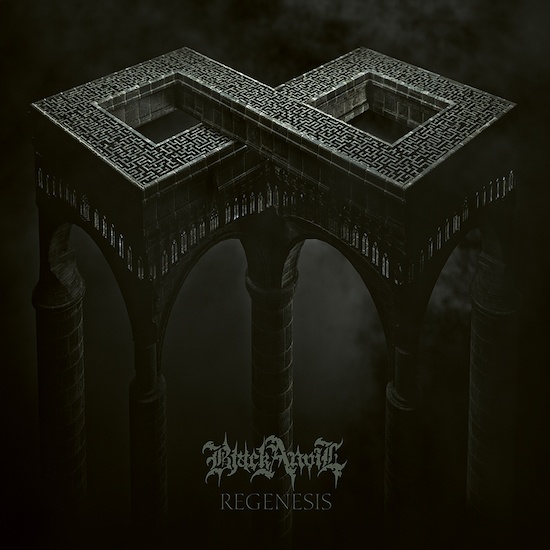 Let’s begin with something bracing, something that’s both chilling and muscular, a song that creates tension and tightens it, becomes scathing and sweeping in its portrayal of despair, stampedes in a fury, and raises its voice in proclamations of hellish reverence. END_OF_DOCUMENT_TOKEN_TO_BE_REPLACED

This new Abysmal Dawn track, “The Path Of The Totalitarian“, is the second single from the band’s new album Phylogenesis, out April 17th on Season Of Mist. END_OF_DOCUMENT_TOKEN_TO_BE_REPLACED 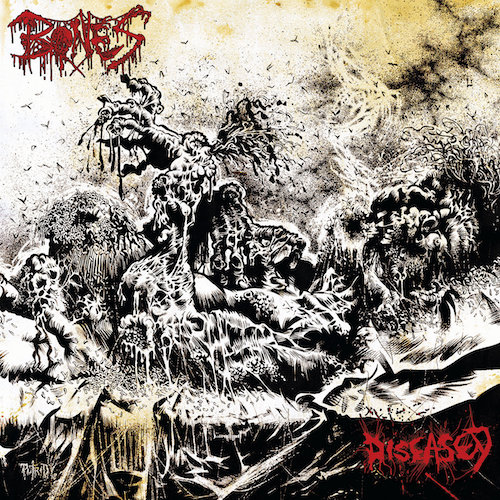 Hellfire and damnation, it’s good to have Bones back! Here at our putrid site we devoted attention to both of their previous albums — the self-titled debut in 2011 and Sons of Sleaze in 2013 (“It’s a monster of an album”, we wrote, “but the kind of monster you’ll want to curl up with on those long, lonely nights when having something’s teeth in your neck is what you need”). That second album was also the source of a song (“13”) we named to our list of 2013’s Most Infectious Extreme Metal Songs, which we described as follows: “It’s got that ugly, corrosive guitar tone — so thick, murky, and radioactive that you’ll feel like showering after hearing the song, even though you know all your skin will come off and wash down the drain. Great vocal disgorgement, too, and the riffs… just murderous”.

But wow, 2013 was a long time ago, so long ago that Bones might have fallen prey to “out of sight, out of mind” syndrome were it not for the fact that those first two albums didn’t wear out their welcome. But after those six long years these crusty death metal barbarians from Chicago have returned at last with a new album — and it’s fantastic (that’s not a shock, but it is a relief to know that they haven’t lost a step, and have instead taken some steps forward). The album’s name is Diseased, and it will be released on September 20 by Transcending Obscurity Records.

All of that is a long-winded way of explaining that we are damned happy to be presenting the premiere of a song from the new album, and it’s a great example of what makes the music of Bones stand out. END_OF_DOCUMENT_TOKEN_TO_BE_REPLACED

I almost overlooked Sorcery’s Arrival At Six as a source of candidates for this list. My faulty memory was telling me this veteran Swedish band’s comeback album was released in 2012, but after double-checking Metal Archives, I saw that it was a January 2013 discharge. What a pleasant discovery — because there’s a song on that album that has become one of my go-to head-wreckers — “Warbringer”. END_OF_DOCUMENT_TOKEN_TO_BE_REPLACED 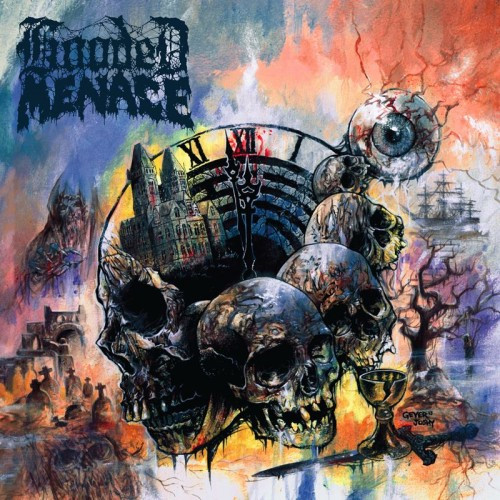 I’ve been distracted today, more than usual, by my fucking day job (the nerve of them expecting me to work for my pay!), but I didn’t want to let this Friday crawl to a close without one more post. I’ve seen and heard a handful of new things today that are worth spreading around, but time being short, I’ll limit this to two excellent items, and perhaps include the rest tomorrow.

The ultra-crushing, doom-dealing blood drinkers in Finland’s Hooded Menace appear to have been working on a follow-up to their gloriously heartless 2012 album Effigies of Evil. The new work will be released as a 12″ EP by Doomentia entitled Labyrinth of Carrion Breeze. The beautiful cover art (and by “beautiful” I mean loaded with fuckin skulls and ghouls) was unveiled on Halloween, and credit goes to Joshua Brettell (Ilsa’s drummer) and Adam Geyer for the creation (Brettell drew, Geyer did the gorgeous coloring). The front panel is above and the gatefold layout can be viewed after the jump (click for bigger views).

In addition to sharing the cover art, Hooded Menace has also made a part of a song called “Chasm of the Wraith” available for streaming. It’s low, slow . . . and actually beautiful, in a dreadful way. END_OF_DOCUMENT_TOKEN_TO_BE_REPLACED

Okay, now that I’ve gotten the details out of the way and nearly sunk this review under the weight of all those links, I do have a few words to say about the music: It’s really fuckin’ good. END_OF_DOCUMENT_TOKEN_TO_BE_REPLACED 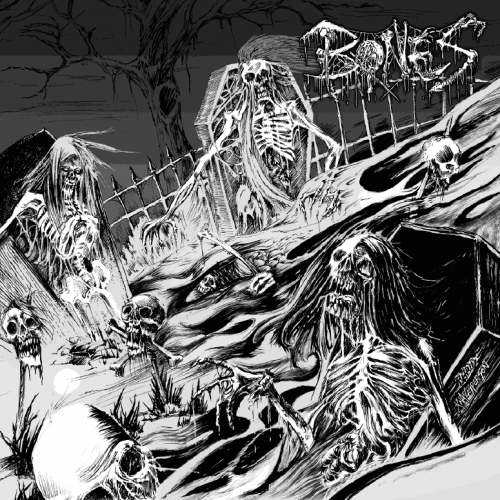 NCS reader SurgicalBrute has turned me on to many excellent bands, and I’ve come to trust his tips. Recently he sent me a new batch of recommendations, and so I decided to just pick three of them for this edition of MISCELLANY. I may do the other three another time.

The way MISCELLANY usually works: We keep a growing list of bands whose music we haven’t heard but who look interesting. The list includes all the bands who contact NCS asking for a review (as it happens, one of SurgicalBrute’s recommendations is also a band who contacted us). Unfortunately, I’ll never be able to get through that list, but when I can, I grab a few names off of it at random, listen to a song or two, write up my impressions, and then stream the same music for you.

This time, of course, I’m using SB’s list instead of the NCS list, and the bands I picked are: Bones (US-Chicago), Embers (US-Oakland), and Undead Creep (Italy). To begin:

Here’s what SurgicalBrute had to say about this first band: “Crusty death metal, and one of my favorite releases this year. They get a lot of comparison to Chicago’s Usurper.” The Usurper comparisons are inevitable: The band is composed of three ex-Usurper members. They released their self-titled debut (on Planet Metal) in July, recording the album live in the studio with production help from Sanford Parker (Nachtmystium). SurgicalBrute sent me a YouTube link to a track called “Bloodlust”, and that’s the song I listened to first.  END_OF_DOCUMENT_TOKEN_TO_BE_REPLACED