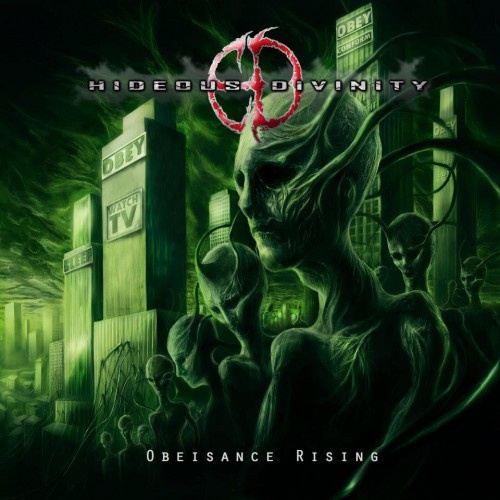 (We’re stoked to present the following guest review by veteran guitarist Ted O’Neill of that most excellent California band Oblivion, whose new album we reviewed here.)

I was very pleased when the powers that be at NCS asked me to write a “guest” review for the site. I’m not a professional writer, which will become evident shortly, so let’s not get too excited about grammatical errors and the like.  Not being a writer by trade also frees me from the self-imposed burden of some of the pseudo-intellectual bloggers who try their best to pick apart and find flaws when they do get their hands on a stellar new release. Fortunately, I’m reviewing Hideous Divinity’s debut album Obeisance Rising, an album which leaves little room for criticism. Before I tell you why this is an album that is more than worthy of your money, let’s introduce the band.

Hideous Divinity is a band hailing from Italy, originally started in 2007 by Enrico Schettino, Mauro Mercurio (both ex-Hour of Penance), and Synder Mastantuono (Eyeconoclast). After composing and recording some material the band was silent until a new line-up took form in 2009 with Enrico H. DiLorenzo (vocals), Enrico Schettino and Fabio Bartoletti (guitars), Flavio Cardozo (bass), and Mizio Montagna (drums). At the time of this writing the band has parted ways with Flavio and Mizio, replacing them with Stefano Franceschini (bass) and Giulio Galati (drums).

For everyone who is not Italian, please re-read that paragraph as we are going to have a quiz here in a minute. OK, ready…go!

So why am I reviewing an album that came out 6 months ago? Well, simply put, this band needs more support. Somehow it seems that Obeisance Rising flew under almost everyone’s radar. This needs to be fixed and fixed NOW because in a sea of crappy generi-core modern metal, Hideous Divinity is an absolute juggernaut top-flight death metal band. I’m going to go out on a limb here and say these guys are a “real” death metal band, as this is death metal done the way it is supposed to be done. 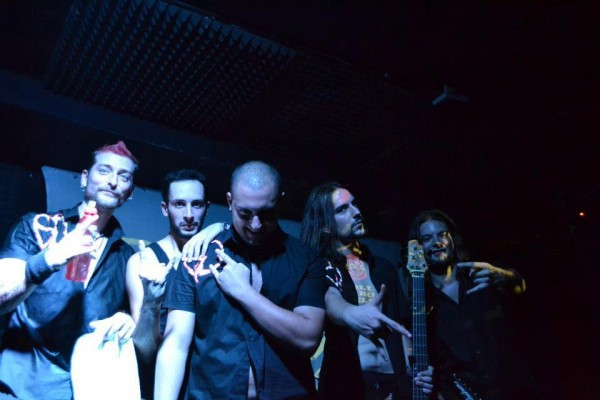 Let’s not argue my use of the phrase “real death metal” until you have heard the album yourself.  If I’m coming off as an elitist, so what.  This band plays at an “elite” level. Here’s the deal, when you find a band that has put the work into making an album destined to be a classic, you buy it. That is how you support bands like this.

The first 10 minutes of this album completely suck you in.  The foreboding and atmospheric opener “A New Morning” soon morphs into a gut-churning riff before giving way to the colossal “Life During Epidemic.” The band transitions seamlessly into “The Servant’s Speech” behind Enrico’s masterful vocals. At this point you realize there is no going back, these guys are for real. “The Servant’s Speech” is one of those special death metal songs that has it all while maintaining its integrity to the genre, the unrelenting brutality only interrupted with a brief and perfectly executed acoustic interlude before transitioning back to crushing your skull.

I realized about 5 songs in that I was hoping nothing would go wrong.  So many times I get my hopes up only to have crappy clean or screeching emo vocals, overindulgent guitar wanking, or filler songs and the like kill what sounded like a good start to an album. Can an unheralded new band’s debut really be this good? See, in “metalhead years”, I’ve been around for a very long time, longer than death metal itself, so I tend to be a little hard to impress and jaded.  So with fingers crossed I hang on as the band just absolutely rips through the rest of the material.

No disappointments come. Just more highlights, like the incredible back and forth solo during “A New Hope of Worms”, the Nile-esque brutality of “Cerebral Code of Obeisance”, the insane and unrelenting riffing in “Bred for Slavery”, and on and on. This whole album starts to sound like a highlight reel. After a few listens it’s really hard to discern a “favorite” song. This is one of those rare albums that could stay on loop all day and never get old. It’s a great album today and it will be a great album 10 years from now. These guys present with a level of confidence, sophistication, and mastery usually reserved for much more established top-tier acts such as Nile and Immolation.

The performances on this album are dazzling. Enrico Schettino and Fabio Bartoletti come off as one of the tightest and most unique guitar duos in extreme metal. From searing leads to punchy and articulate riffs to massively heavy chord changes, these guys have everything in their arsenal but never display it when unnecessary. Enrico H. DiLorenzo establishes himself as one of the top death metal  vocalists. 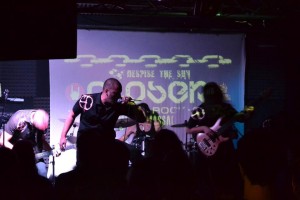 Let’s talk about Enrico H.D. for a second. It is more than a little interesting to note that he is a medical doctor by trade with specialty in Phoniatry and Audiology. He actually does studies on the physiology and the artistic use of the voice.  His research pays off as he is clearly a force to be reckoned with and puts forth a simply stellar vocal performance on this album.

The percussion and rhythm sections, though now manned by Stefano Franceschini (bass) and Giulio Galati (drums), are thunderous.  With Stefano and Giulio on board, Hideous Divinity boasts their best line-up to date.

While the performances themselves are hugely impressive, what really makes the HD motor run is the composition and song structure. This is death metal architecture at its finest. No fat to trim, everything is concise and perfectly placed.

To me, too much of modern extreme metal is gimmick-laden. Or, bands try to be different, shocking or avant garde just for the sake of it. It seems that HD isn’t even aware of the trends and gimmicks so pervasive in todays scene. It’s as if they come out to say, “this is what it is, deal with it”, no gimmicks, no games, just a nearly perfectly orchestrated death metal masterpiece.

2012 has been a great year for extreme music and death metal in particular. Veteran and iconic bands such as Nile, Dying Fetus, Cattle Decapitation, Spawn of Possession, and Cannibal Corpse have released some of their best material.  Newer bands such as Antropofagus and Arkaik both produced stellar efforts, and we still have new Aeon about to drop.  Right now, Hideous Divinity’s Obeisance Rising is my pick for extreme metal album of the year. If this isn’t in your top ten you either haven’t listened to it or you don’t enjoy music. It’s just that simple kids.

EDITOR’S NOTE: Obeisance Rising was released by Unique Leader earlier this year; you can read an earlier NCS feature on the band at this location. The album is available on CD at HD’s online store (here) and can also be downloaded from both Amazon mp3 and iTunes. To learn more about what Hideous Divinity are up to, visit their Facebook page.

And I want to put in one more plug for the forthcoming album by Ted O’Neill’s band Oblivion, Called To Rise. Humble man that he is, Ted didn’t include it in his list of the year’s stand-out death metal releases, but it surely belongs there.