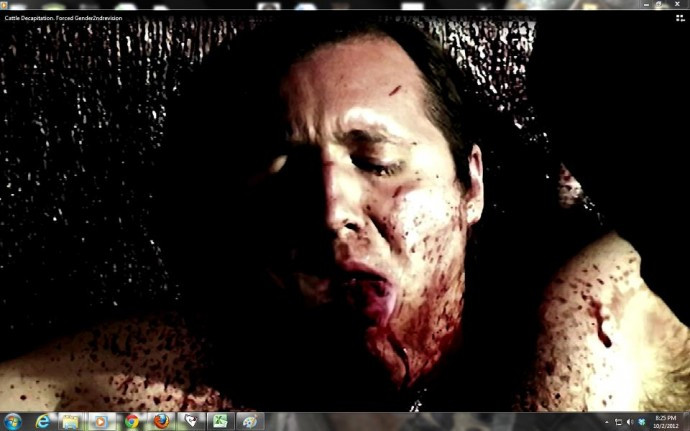 (It didn’t take long to get our first guest post in response to our solicitation of two days ago, and even though I hadn’t planned to start rolling out our guest series until Nov 5, I’m going with this one now. Please welcome Tyler Lowery.)

Since the birth of extreme metal, there has always been gore in one sense or another. Be it lyrical content, album covers, stage performance, or music videos, metal heads love to see blood and guts. It’s engrained into the very nature of the music. That being said, there can only be so many decapitated bodies floundering around while a band screams about it in the background, right?

As I’m sure we’re all aware, Cattle Decapitation recently released an extremely gory video for their song “Forced Gender Reassignment”. The video displays sexual assault, rape, and the mutilation of human flesh. With the sophistication in special effects, prosthetics, and computer-generated graphics, making the filthiest video possible is now easier than ever! And because of this, the question has been raised about the feasibility of excessive gore in music videos.

As the post here pointed out, Travis Ryan made the following statement about that video: “It seems nowadays you have to be over the top in your presentation to get anyone to think about anything anymore.” This reminds me of the recent comment made by Ann Coulter about the presidential debates in which she called Barack Obama a “retard”. Whatever point that bat shit crazy nutbag was trying to make was immediately lost under the reckless comment she made. 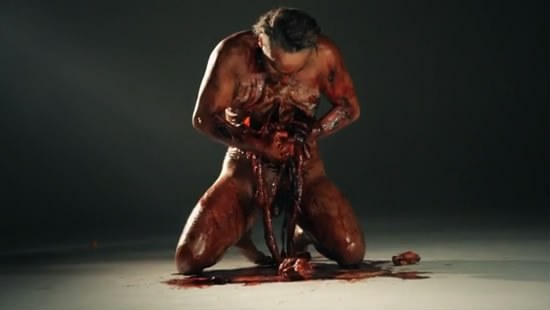 Besides, let’s be honest here. For those who actually made it through the video, how many people were thinking about the political statement being made behind the thick wall of genital torture and forced circumcision? In addition, without the press conference tagline, I would think it is near impossible to divine the social / political commentary of a guy ripping another guy’s sack off with a pair of vice grips.

Cattle Decapitation are not the only band willing to spend their video budget on buckets of blood either. Rwake (for “It was Beautiful But Now It’s Sour”), Cephalic Carnage (for “Ohrwurm”), and Impaled have all created disgusting displays of dragging entrails and sadomasochistic bloodbaths. Can anyone say that they remember anything about any of these videos? I cannot bring a single detail of any of them to mind, and therefore I don’t even remember if any of them had a point at all. Within the time it takes a new band to find a legal way to shoot a bestiality scene, “Forced Gender Assignment” will be long forgotten.

Also, these videos that cram as much gore into the usually short runtime as possible often take the lower road when considering production value and quality of the actual video. There are only so many ways you can tastefully shoot a disembowelment. However, there are still bands who put out decent quality videos that include plenty of gore. “Tarnished Gluttony” by Job for a Cowboy has been the most recent video that was half decent to look at but still contained a substantial gore element, and to my knowledge, there was no commentary on sweatshop workers in Indonesia. I don’t remember when this video was released, but I still remember the guy carrying that kid into the water.

So here is the point: Metal music and mutilation seem to go hand in hand. There is nothing that any internet bitching can do to stop that. If someone wants to volunteer to have their bodies mutilated through the miracles of prosthetics and pig’s blood, by all means. I wouldn’t consider this as thought-provoking art by any stretch of the imagination, but hey, different strokes, right? However, if you are going to produce a video with the intention of commenting on a social or political issue, try not to bury it under 6 feet of disturbed and incredibly violent gore fests.

19 Responses to “ON THE TOPIC OF GORY METAL VIDEOS”