Hellbastard came into being somewhere in late ’84 or early ’85. Some say they were the band who created the “crust” wave of the 1980s. Some say they coined the genre name “crust” with their 1986 demo release Ripper Crust. But by 1992 the band had fallen apart. They re-formed in 2008, and now they have a new five-song EP on the way, which will be released on vinyl by Patac Records on November 15. I’ve only just begun listening to it, and it’s damned good — so good that I wanted to say a few words about it right away.

Though I’m blessed to have the whole EP, only the first track is out there for public consumption so far. It’s called “Arcadia”, and it’s an ingenious motherfucker. For most of its length it’s a stripped-down combo of rumbling bass and drums, punctuated by a short repeating series of guitar chords and overlaid by wolfish vocals. Melodic slowdowns interrupt the avalanche a couple of times, and then at the end it starts to really accelerate.

Stylistically, the song is more crust/punk than thrash, but it’s got the filth, the infernal aura, and the spine-grabbing riffs, and I’m really digging it. Here’s a video for  “Arcadia”:

The Sons Of Bitches vinyl will be limited to 1000 copies and can be ordered at THIS LOCATION. I don’t know if it will eventually be made available as a download or on CD. 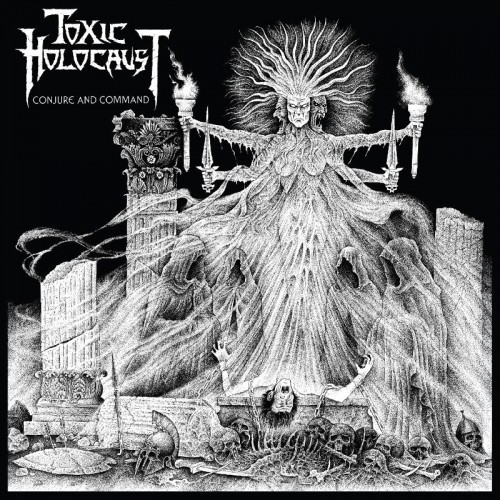 Portland-based Toxic Holocaust’s latest album is Conjure and Command, released last year by Relapse Records. It’s my kind of thrash — a fusion of punk and speed metal with irresistible riffs and  gravelly vocals — and plenty of filth.

Yesterday Toxic Holocaust released an official video, but the song it features — “Lord of the Wasteland” — goes back to the 2008 album An Overdose of Death… This song gets the convulsions going right from the start with a big hooky riff. More infectious riffs follow, and Joel Grind’s vocals sound nice and nasty. Check it out (and sorry about the ads):

Toxic Holocaust – Lord of the Wasteland by RelapseRecords

Eldritch Flamethrower are from Springfield, Oregon. I first came across them more than a year ago and wrote about them here on the occasion of releasing their first recorded track, “Human Barbeque”, which kicks ass. The band shares members with another Oregon band (Arkhum) we’ve written about a lot here, though I think it’s Sean Corkum (Rocket Propelled Chainsaws) who gets most of the thanks for the ass-blasting riffage that the band rolls out.

In recent days, the band have unveiled a second song, “Nuclear Holofrost”. Of the three songs featured in this post, “Nuclear Holofrost” may have the most traditional thrash riffing style, and it’s definitely the fastest. The song is a hell-bent-for-leather gallop, and by gallop I mean the kind you might have gotten from Seabiscuit if someone had stuck a rocket up his ass before he bolted from the starting gate. It’s a big ol’ mosh trigger that doesn’t stop the spine-shaking from start to finish, and the alcohol-soaked vocals are . . . filthy.

I’m not positive when and how this song, or any other Eldritch Flamethrower creations, will be made available for public acquisition, but if I find out I’ll let you know. Now go ahead and headbang to “Nuclear Holofrost” and “Human Barbecue”; they’ll leave hoof marks across your back: