Hellbastard came into being somewhere in late ’84 or early ’85. Some say they were the band who created the “crust” wave of the 1980s. Some say they coined the genre name “crust” with their 1986 demo release Ripper Crust. But by 1992 the band had fallen apart. They re-formed in 2008, and now they have a new five-song EP on the way, which will be released on vinyl by Patac Records on November 15. I’ve only just begun listening to it, and it’s damned good — so good that I wanted to say a few words about it right away. END_OF_DOCUMENT_TOKEN_TO_BE_REPLACED 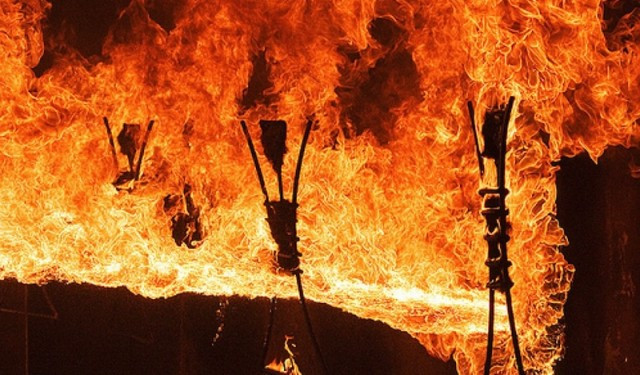 Isn’t that just the most fucken rad name for a metal band? Actually, Eldritch Flamethrower isn’t exactly a full-fledged metal band just yet, but they’re on their way. I know about them because of their connection to Oregon’s Arkhum, a band to whom we’ve paid a fair bit of attention at NCS (because they are also fuckin rad), most recently here. Specifically, Arkhum’s bassist Matt Edwards is on lead vocals, Arkhum’s vocalist Kenneth Parker is on bass and backing vocals (sounds like a game of musical chairs), and Arkhum’s guitarist Stephen Parker is doing the production work plus yelling along on gang vocals.

But this isn’t an all-Arkhum side project. It also includes Sean Corkum from another (recently deceased) Eugene-based outfit called Rocket Propelled Chainsaws (there’s another fucking rad band name for you) and Nathan Kelley from the sludge band Boneblossom (yep, there’s another one). All I’ve heard from Eldritch Flamethrower so far is a track called “Human Barbeque”, which is a f*cking rad song title. The final mix on the song isn’t even finished, but it’s more than enough to get me up and stomping around the room, scaring the piss out of my cat and disturbing the termites who’ve started a home-sweet-home in the baseboards.

It’s raw, primal, punk-y thrash, but without the classic vocal style that I often find annoying about thrash. It’s party music for a cannibal feast. Sean Corkum has cooked up some nasty headbanging riffs, and he executes a charcoal-fired solo that’s so smokin’ you can almost smell the human flesh on the grill. Yum!

Speaking of which, I really want to yell “Human Barbeque!” along with the gang vocals on this track. In fact, I think I will do that right now, especially because I’m running out of variant spellings for the word FUCKING. You can sing along, too, because I decided to stream the song right after the jump.  (also, the photo I lifted for this post is copyrighted by Tristan Savatier) END_OF_DOCUMENT_TOKEN_TO_BE_REPLACED