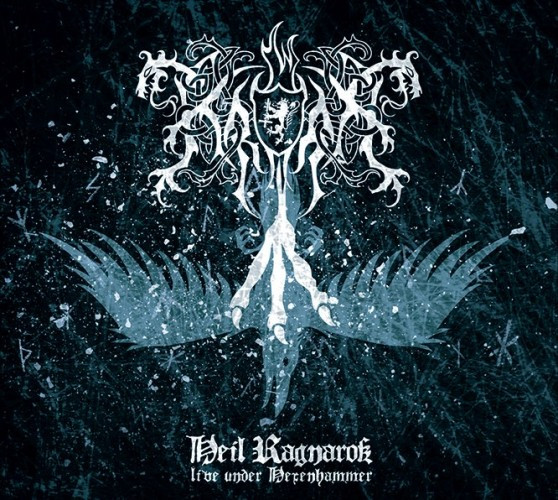 Long-term NCS readers will know about Kroda because we’ve written about them so often at NCS (their 2011 album Schwarzpfad was probably my favorite black metal album out of all the ones I heard last year, and I included a song-stream from the album on our list of the 2011’s Most Infectious Extreme Metal Songs).

As previously reported at this site, Kroda recorded a live album at a concert in Moscow on April 14, 2012, planning to release it in the form of a combined CD and DVD under the title Live Under Hexenhammer: Heil Ragnarok!.  Last month, we streamed one of the tracks from the new live album, an awesome cover of a song called “Noregsgard” by the Norwegian band Storm (which included Fenriz of Darkthrone and Satyr of Satyricon) from Storm’s 1995 Nordavind album.

Just minutes ago, however, Kroda made public a new Bandcamp page and are now offering Live Under Hexenhammer for digital download. It’s a monster release, consisting of about 100 minutes of music, with live performances not only of original Kroda songs but also covers of songs by Summoning, Absurd, and the aforementioned Storm. The entire album is available for $8.99, and the songs can be downloaded individually as well.

And of course the entire album can now be streamed.  We’re planning a review of this release, which Kroda were nice enough to let us hear in advance. But you won’t have to take our word for it. Listen for yourselves after the jump: Live Under Hexenhammer kills.

It appears that Kroda will not be releasing the music on CD because of the album’s size; one CD will only hold 80 minutes of music, and the cost of making a double-CD physical release was too great. So, at least for now, it appears that Live Under Hexenhammer will be a digital-only release, via Bandcamp.

Here is the new Bandcamp link, plus a link to Kroda’s FB page, and below those is the album stream:

3 Responses to “KRODA ON BANDCAMP!”