(Yes, Japan’s Baby Metal are back with something new, and as the sun follows the night that means our Japan-based correspondent Phro is back, too.)

So, Islander said he’d take away my food supply if I didn’t get this written up and sent to him before nightfall. As such, you have only him to blame if you find the writing subpar. Well, okay, more subpar than usual. Whatever. I need my horsey cock.

Baby Metal, the semi-official house band of No! Clean Singing!, has released a new song, titled “Ijime, Dame, Zettai.” (Roughly translated by a group of feces-tossing, anus-slurping, toe-jam-eating howler monkeys as: “Bullying, Don’t, Definitely.” We slapped them around a little bit, and they came up with this slightly less steamy pile of rancid eggplant puree: “Just Say No to Bullying!” The howler monkeys have been fired.)

Now, if you think that’s a strange change of focus for a band that thus far has mostly sung about…something, well, you’re not entirely wrong. However, there is a method to this madness. (Ummm…a dim glimmer of a reflection of a method.) 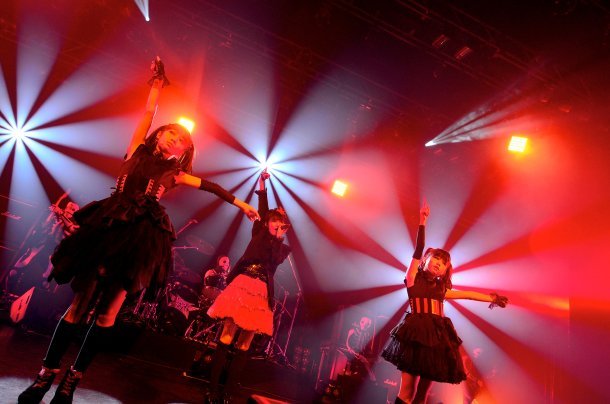 Japan, as you may or may not know, has a bullying problem. I think every country does, but Japan has recently been making a big deal about it. It may or may not be related to the incident where one kid was bullied badly enough to commit suicide…and then the police tried to cover it up by saying there was no conclusive proof that he was bullied despite pretty much every classmate testifying that they’d seen a group of other boys beating him, berating him, and forcing him to “practice commiting suicide.” Which lead to his parents suing for damages–something that almost never happens in Japan. (There was some other shitty stuff that happened, but it’s depressing, so let’s move on.)

Look, I’m sure it happens in every country (just look at the suicide rate of gay teens in the US, for a horrible beginning). And someone finally realized that saying “just suck it up, people can only hurt you if you let them” is the equivalent of telling someone having a heart attack to walk it off. So they…had a TV concert about it? To be honest, I’m not sure, I stop paying attention whenever TV is used to try to solve…anything.

Anyway, apparently Baby Metal was invited to perform “Ijime, Dame, Zettai” on NHK (like PBS in the states, but slightly better funding). (At like 11 pm? Who the hell is watching 12-year-old girls in short skirts perform at 11 pm at…ohhhhhhhhhhh, nevermind.)

So, that’s why the title and lyrics of the song are so much different from their usual fare about exciting mornings (heh) and foxes (kitsune da yo). I’m sure I got a few details wrong, but I’m working from memory and this is my lunch break.

The song is a surprising straight-forward rocker/traditional-metal song. It’s long (about 6 minutes), but I need you all to do me a favor and at least watch the guitar solo. I swear for a second there it looks like the two little girls (that phrase will never not sound horrible and pervy) are actually playing the guitar (raise your hand if you thought I was going to say bone flute). I honestly am too stupid to be able to tell, so someone who’s not a blathering moron should watch it and let us know. (I realize no one is actually “playing” an instrument in most music videos, but I thought they almost looked like they knew what they were doing. Like I said, I’m a moron.)

Also, doesn’t the guy with the awesome beard kind of look like a stretched out, addicted-to-heroin Gimli????