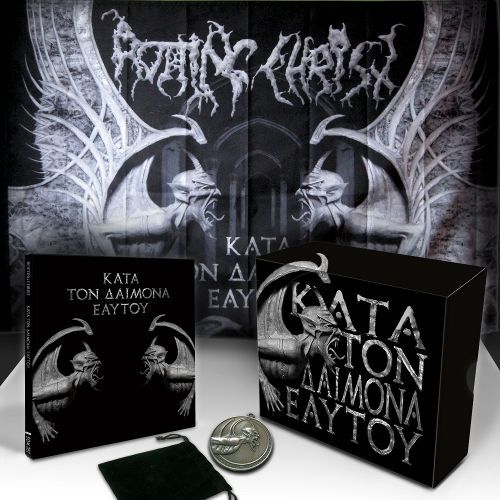 We’re getting close enough to the end of the year that we’re beginning to have a good idea about at least some of the 2013 albums that belong on a Highly Anticipated list.  Near the top of my list will be the new album from Rotting Christ. Which means, of course, that every time I get even the smallest morsel of news about the album, it will go straight into an NCS post. And so, I have this news, hot off the presses:

The album will be named ΚΑΤΑ ΤΟΝ ΔΑΙΜΟΝΑ ΕΑΥΤΟΥ (“Do What Thou Wilt”), and it has been scheduled for a March 5th release in North America by Season of Mist. It will be available as a CD, a double gate-fold LP, and a limited edition Digibox that includes a pendant in a velvet bag, a flag, and a Digipak CD with the bonus track “Welcome to Hel”.

Frontman Sakis Tolis has further revealed in a recent interview that he has been working on the album for more than a year, and that it was recorded in Athens and mixed in Sweden by Jens Bogren (Amon Amarth, Opeth, Katatonia). He also said this: “I came up with our darkest outcome ever… It’s an interesting album, very apocryphal. It’s a multinational album; it is about underworld Gods inspired by different ancient cultures.”

Sakis’ statement seems borne out by the variety of names and languages reflected in the track list:

By the way, I’ve added links to certain names and words in that track list for sum lernin’ about the subject matter from The Font of All Human Knowledge and other sources, at least as I can best decipher them.

And is that album cover hot shit or what?