To hear the song and get it for free, go to this location and enter your e-mail address. You’ll then receive a download link by e-mail. To watch the new video, continue on past the jump.

I’m a Vanessa Nocera fan, principally through her band Skeletal Spectre. She’s also a member of Scaremaker and Wooden Stake. But I’ve now discovered that she also lends her vocal talents to a new project named Howling, in which she’s joined by Tony Proffer (Beyond Hell) on guitar and bass and drummer Elektrokutioner (Scaremaker, Wooden Stake, Beyond Hell, Encoffination, Father Befouled, etc.).

Howling have recorded a debut album that will be released by Razorback Records in early 2013. Today I saw that Howling have established a Bandcamp page, and on that page they’ve begun streaming and selling a song from the forthcoming album called “As Man Becomes Lycanthrope”. It’s a black, wolfish brute of a rocking, thrashing, lumbering, bloody, death-shrouded beast of heavy metal carnage.

Actually, I have no idea what that means, but I’m not editing it.

Vanessa Nocera’s vocals continue to knock me down, I’m mightily digging the song’s guitar solo, and the whole song is just . . . beastly. 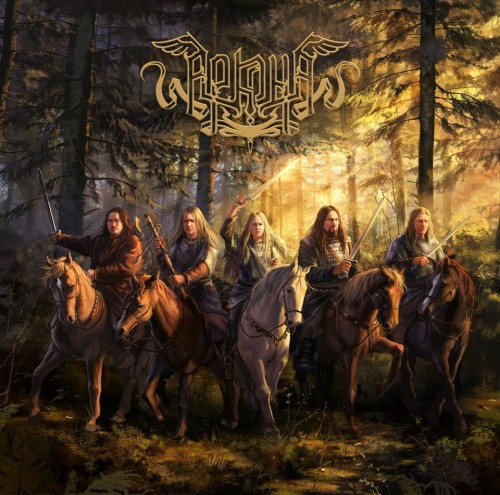 Today I saw that Russia’s Arkona have premiered two tracks that will appear on Decade of Glory, a live two-CD album that Napalm Records has scheduled for release on February 22, 2013. This is going to be a massive release. It’s the entirety of a 10th anniversary concert recorded last February, and the two CDs will total more than 2 1/2 hours of music.

Like Ghost, Arkona are a band who sealed the deal for me based on their live show. These first two tracks from the live album are (and I really do hate to use this word, but no other will do) . . . epic. And it has occurred to me again that there’s something about Slavic languages that just make metal songs (and maybe especially folk metal songs) sound even more metal.

4 Responses to “SUNDAY SEEN AND HEARD: GHOST, HOWLING, AND ARKONA”